The percent of online adults who watch or download videos has continued to grow over the past four years, from 69% of adult internet users in 2009 to 78% today. That figure includes online adults who do at least one of the following:

Among online adults, rates of online video watching are highest among those under age 50, as well as those with higher educational attainment and household incomes. Specifically: 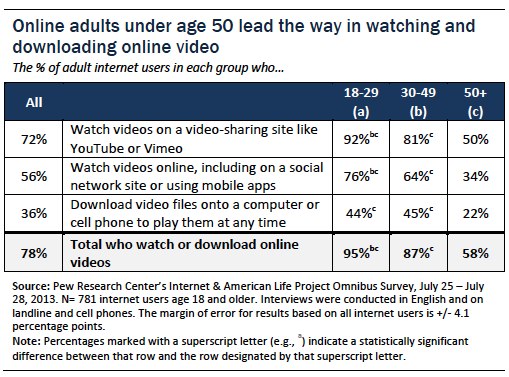 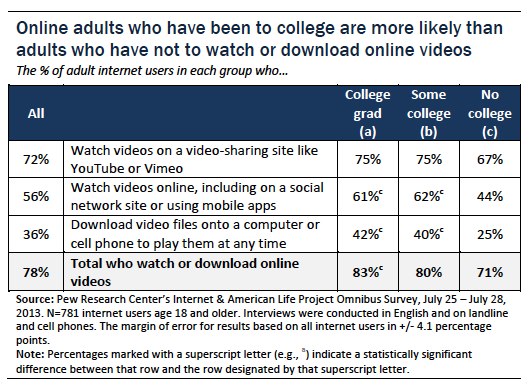 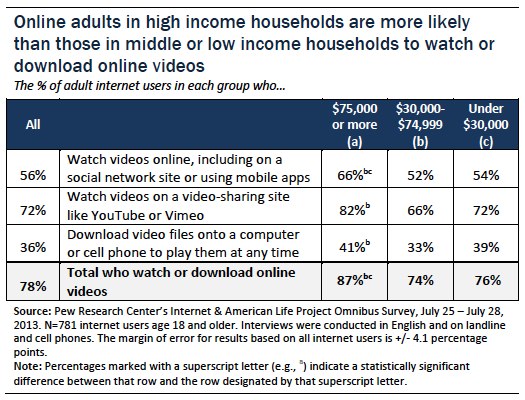 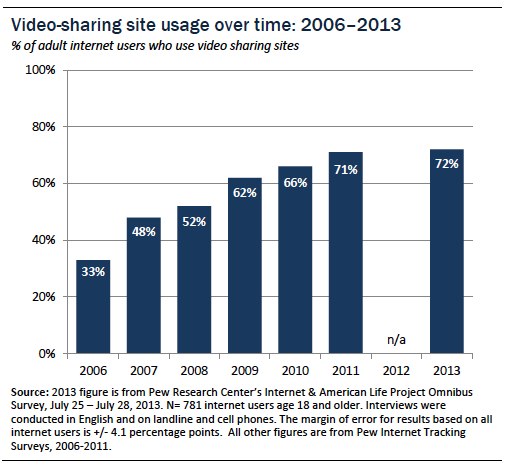 As we found in 2009, comedy and educational videos are among the most widely viewed video genres, with 58% of all online adults saying they watch comedy/humorous videos and 50% of online adults saying they watch educational videos.5 These two genres are now joined at the top of the list by how-to videos. The current survey is the first time we have measured this genre, finding that 56% of online adults are watching how-to videos. Music videos showed the largest growth in viewership between 2009 and 2013, from 32% to 50% of all online adults, placing it among the most popular genres of those asked about. 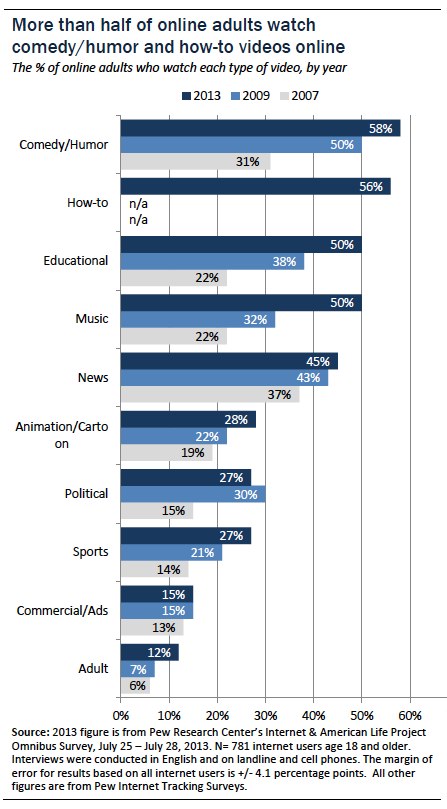 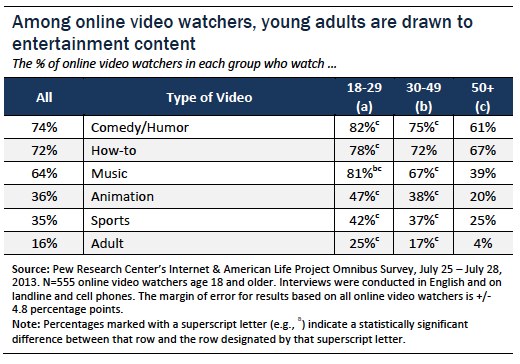 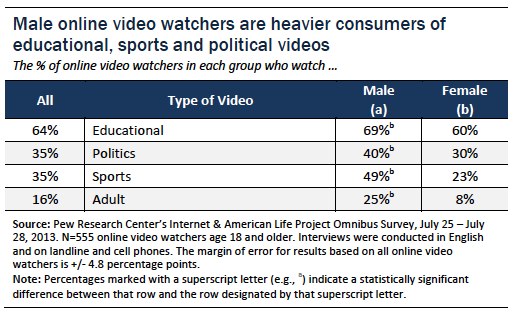 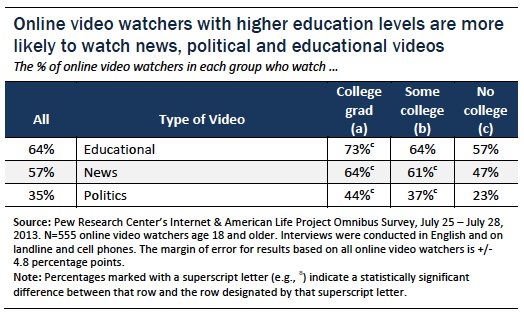 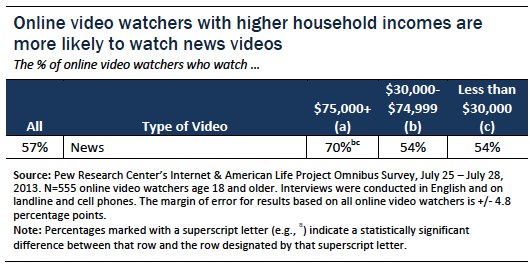 Along with the growing consumption of online videos, there is now considerable growth in the percent of adult internet users who post videos online. The group has doubled in size in the past four years from 14% in 2009 to 31% in 2013. This figure includes online adults who do either of the following:

Once almost exclusively the domain of male internet users under age 306, posting and sharing videos online has now spread more broadly across the online adult population. For example, adult internet users age 30-49 are just as likely as those age 18-29 to post and share online videos. Still, both of these age groups continue to outpace those age 50 and older when it comes to this behavior: 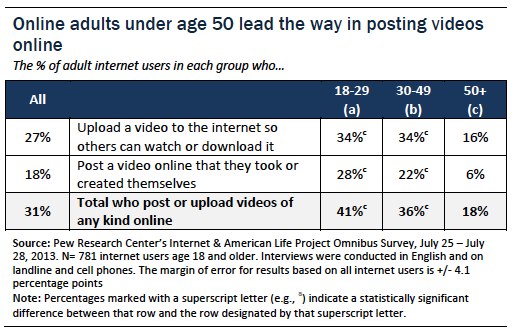 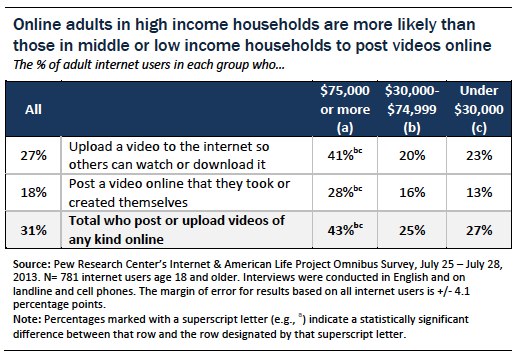 The most popular subjects for those who post their own videos online are friends and family doing everyday or funny things, and videos of events they attend

Among the 18% of adult internet users who post their own videos online, the most popular topics are fairly mundane. More than half post videos of family and friends doing everyday things (58%), themselves or others doing funny things (56%), or events they attend (54%). In contrast, just 23% post videos they have intentionally staged, scripted or choreographed, and just 30% post educational or tutorial videos they have made. 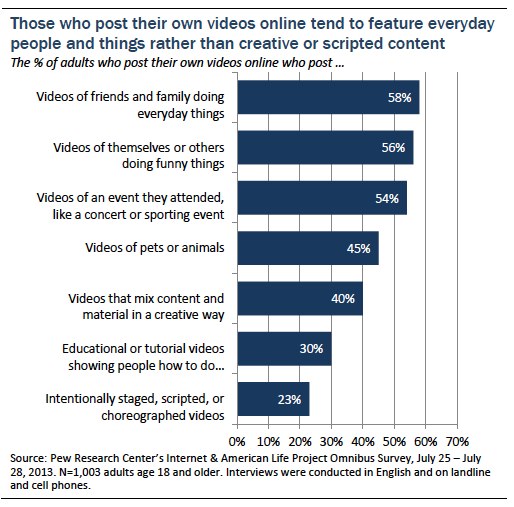 Among all adults who post and share online videos –either self-created or created by others—35% say they have posted a video online with the hope of it being widely viewed or “going viral.” That equates to 11% of all adult internet users.

The desire to have a video “go viral” is particularly strong among younger adults. Among adults who post videos online, 39% of those under age 50 have posted a video hoping it will attract a large audience, compared with just 19% of video posters age 50 and older.

Just 5% of adults who post videos online say they regret something they have posted. 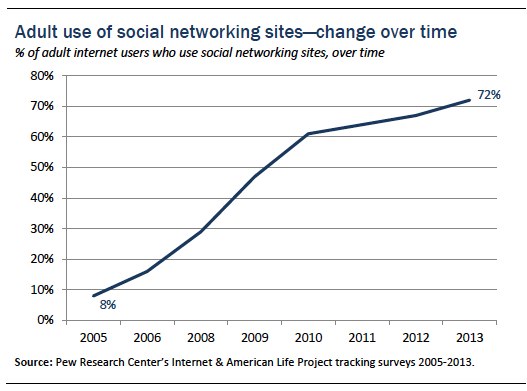 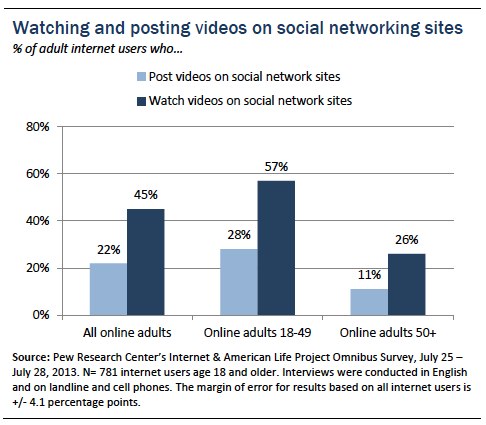 The growing online video culture is also, in part, a byproduct of the dramatic increase in cell phone and smartphone ownership among U.S. adults over the past decade. As of May 2013, 91% of U.S. adults owned a cell phone of some kind, including 56% who owned a smartphone. Cell phones and smartphones allow their users to easily watch videos on their mobile devices, as well as to record and post videos. 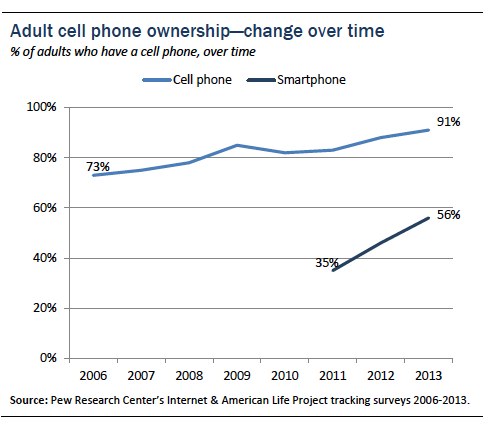 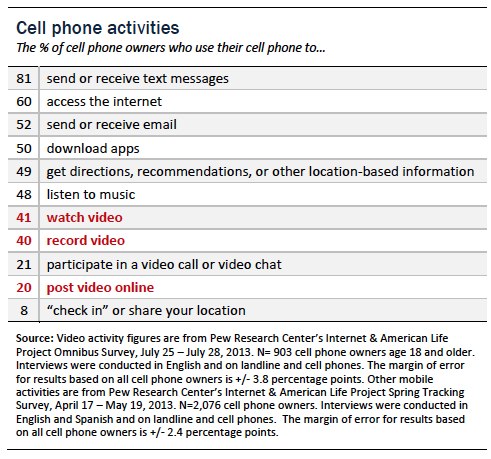 All three of these mobile activities—watching video, recording video, and posting video online – are more popular among younger cell phone owners and those in higher income households. 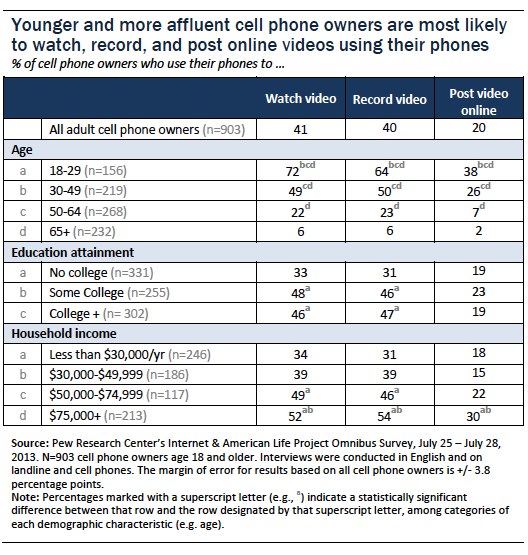 Further reflecting the intersection of mobile devices and the online video culture, apps such as Vine are emerging which allow users to easily record and share short videos. Among online video consumers, 17% say they watch videos using a cell phone app like Vine. And among online video posters, 23% say they have posted a video using this kind of app. As a percent of all adult cell phone owners, this equates to: