In its first report on the use of “geosocial” or location-based services, the Pew Research Center’s Internet & American Life project finds that 4% of online adults use a service such as Foursquare or Gowalla that allows them to share their location with friends and to find others who are nearby. On any given day, 1% of internet users are using these services.

This is the second survey of the Pew Internet Project to ask about such “geosocial” or location-based services. The current number shows little change from the first time this question was asked, in a May 2010 survey, when 5% of adult internet users said they had used such a site.

Location-based services such as Foursquare and Gowalla use internet-connected mobile devices’ geolocation capabilities to let users notify others of their locations by “checking in” to that location. Location-based services often run on stand-alone software applications, or “apps,” on most major GPS-enabled smartphones or other devices.

Some of these “geosocial” services emphasize social networking functions, and can notify friends on the service when the user is nearby. Users may also be able to leave comments or reviews for a certain business or other location, which may be viewed by later visitors. Other services take a gaming approach, in which check-ins are used to unlock “levels” or “badges,” or can be used to earn a certain title (such as “Mayor”) when the user has checked in to that location more than any other user. (Here the mobile device’s GPS function is also important to help prevent people from checking in to places they are not at physically, which is considered a form of cheating.) Such detailed real-time information about customers’ habits is very attractive to businesses, who may share special deals with users, or reward “mayors” and other frequent users with free or discounted services.

Main findings: The use of “geosocial” or location-based services

Four percent of online adults use a service such as Foursquare or Gowalla that allows them to share their location with friends and to find others who are nearby. On any given day, 1% of internet users are using these services. The following table gives a breakdown of the demographic differences among internet users who use geosocial or location-based services: 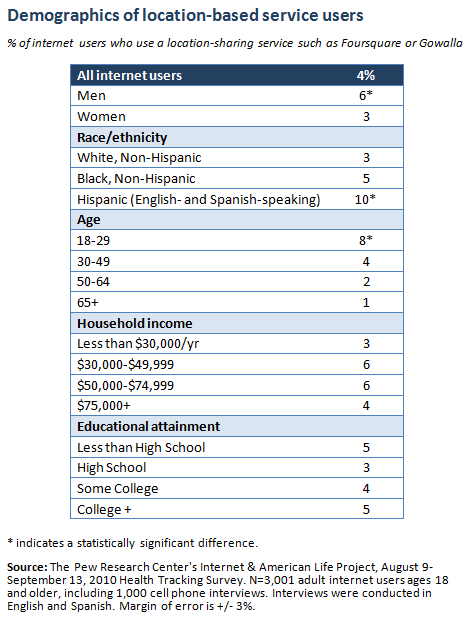 This report is based on the results of a telephone survey by the Pew Research Center’s Internet & American Life Project conducted between August 9 and September 13, 2010. The survey was administered to a sample of 3,001 adults, age 18 and older, using a combination of landline and cellular telephones. Interviews were conducted in English or Spanish. The sample margin of error is plus or minus 2.5 percentage points for the general population and plus or minus 2.9 percentage points for internet users (n=2,065). 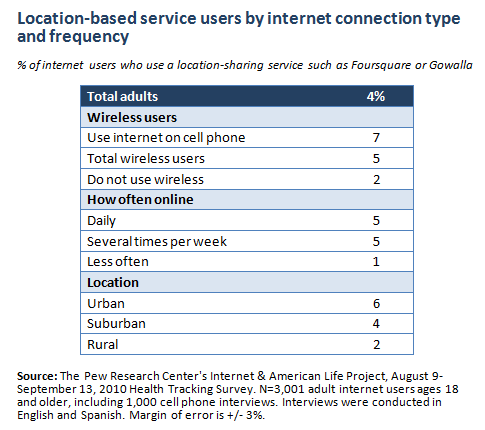 Though location-based services usually require an internet-connected mobile phone, 2% of non-wireless users (those who do not go online with either a cell phone or a wireless-enabled laptop) also say they have used such a service. This number may include cell phone users who use geosocial services such as Brightkite, which allows users to update their location by SMS. These non-wireless respondents may also include respondents who use location-reporting services such as Google Latitude or Dopplr, which can be used on a desktop computer. Respondents may also have signed up for the services to follow friends’ movements without updating their own location.

Additionally, the ability to report one’s location is a feature that has recently been added to many pre-existing sites such as Twitter and Facebook. It is possible that as the lines between different types of services become increasingly blurred, it is difficult for respondents to always pinpoint exactly what sort of software they are using—especially on their mobile devices. Our recent report on the rise of apps culture, for instance, found that 11% of cell phone owners are not sure whether their phone is even equipped with apps.

Location-based services are similar in some respects to status updating services such as Twitter, in which users communicate by short messages sent online or by text. Status updating services have grown in popularity over the past few years, from 6% of online adults saying they had used such a service in August 2008 to 24% in September 2010. 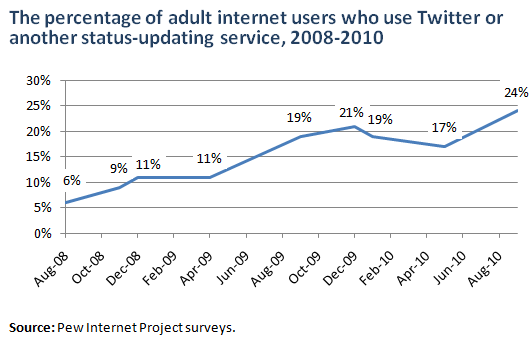 Internet users who use social networking sites such as Facebook or MySpace and those who use status-update services such as Twitter also have relatively high levels of location-based service usage: 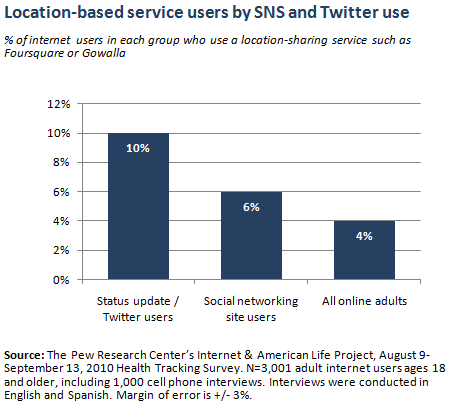