Key Lehman Schlozman — Kay Lehman Schlozman serves as J.Joseph Moakley Endowed Professor of Political Science at Boston College in Chestnut Hill, Massachusetts. She received a B.A. from Wellesley College and an M.A. and Ph.D. from the University of Chicago. She is co-author of Injury to Insult: Unemployment, Class and Political Response (with Sidney Verba), Organized Interests and American Democracy (with John T. Tierney), Voice and Equality: Civic Voluntarism in American Politics (with Sidney Verba and Henry E. Brady) which won the Philip E. Converse Prize, and, most recently, The Private Roots of Public Action: Gender, Equality, and Political Participation (with Nancy Burns and Sidney Verba), which was co-winner of the American Political Science Association’s Schuck Prize. She has also written numerous articles in professional journals and is editor of Elections in America and co-editor of The Future of Political Science: 100 Perspectives.

Among her professional activities, she has served as Secretary of the American Political Science Association and as chair of the APSA’s organized section on Elections, Public Opinion and Voting Behavior. She is the winner of the APSA’s 2004 Rowman and Littlefield Award for Innovative Teaching in Political Science and the 2006 Frank J. Goodnow Distinguished Service Award. She is a fellow of the American Academy of Arts and Sciences.

Sidney Verba — Professor Verba is The Carl H. Pforzheimer University Professor Emeritus and Research Professor of Government as Harvard University, where he taught for thirty-five years. At Harvard, he was also chair of the Department of Government, Associate Dean of the Faculty for Undergraduate Education, and Associate Provost, among several other senior administrative posts. In addition, he served as the chair of the Board of Directors of the Harvard University Press and has been the author of University-wide reports on many complex subjects. Professor Verba received his B.A from Harvard and his PhD from Princeton. He has taught at Princeton, Stanford, the University of Chicago, before joining the Harvard faculty.

One of the nation’s most renowned political scientists, Professor Verba is an award-winning author of over twenty books and numerous articles on American and comparative government. Much of his writing is on the role of citizen engagement and activism in a democracy, with an emphasis on issues of equality in American political, social, and economic life. He has been President of the American Political Science Association, and won the Association’s Kammerer Award for the best book on American politics and its Woodrow Wilson award for the best book in political science.

He is a member of the National Academy of Sciences (where he has chaired the Social and Political Science Section and currently chairs the Committee on Human Rights), the American Philosophical Society, and the American Academy of Arts and Sciences. Among his awards are the James Madison Prize of the American Political Science Association, the Association’s highest award, given every three years for a career contribution to political science, the Skytte Award from Upsalla University in Sweden, the major international award for significant contributions to political science world wide, the Dinerstein Prize from the World Association of Public Opinion Research for contributions to the methodology and study of public opinion, and the Warren Miller Prize for contributions to the study of elections and public opinion.

Professor Verba served as Director of the Harvard University Library for 24 years. As Director of the University Library, Professor Verba assumed a leadership position in a range of library initiatives both nationally and here at Harvard. He was a founding member of the Commission on Preservation and Access and served on the Board of its parent organization, the Council on Library and Information Resources. He has been a member of the Higher Education Advisory Committee of OCLC and has served on the Visiting Committee to the Stanford University Library. He testified before Congress on behalf of the library and humanities communities in support of the National Endowment for the Humanities, in particular its Brittle Books Program.

Henry Brady — is Class of 1941 Monroe Deutsch Professor of Political Science and Public Policy at the University of California, Berkeley and Dean of the Goldman School of Public Policy.  He received his PhD in Economics and Political Science from MIT in 1980.  He has written on electoral politics and political participation, social welfare policy, political polling, and statistical methodology, he has worked for the federal Office of Management and Budget and other organizations in Washington, D.C. He is president-elect of the American Political Science Association, past president of the Political Methodology Society of the American Political Science Association, and director of the University of California’s Survey Research Center from 1998 to 2009.

He is coauthor of Letting the People Decide: Dynamics of a Canadian Election (1992) which won the Harold Innis Award for the best book in the social sciences published in English in Canada, Voice and Equality: Civic Voluntarism in American Politics (1995) which won the Philip Converse Award for a book making a lasting contribution to public opinion research, Expensive Children in Poor Families: The Intersection of Childhood Disability and Welfare (2000), and Counting All the Votes:  The Performance of Voting Technology in the United States (2001).  He is co-editor of Rethinking Social Inquiry (2004) which won the Sartori Award for best book on qualitative methods, Capturing Campaign Effects (2006), and the Handbook of Political Methodology (2008).

This report is based on the findings of a daily tracking survey on Americans’ use of the Internet. The results in this report are based on data from telephone interviews conducted by Princeton Survey Research Associates International between August 12 to August 31, 2008, among a sample of 2,251 adults, 18 and older.  For results based on the total sample, one can say with 95% confidence that the error attributable to sampling and other random effects is plus or minus 2.4 percentage points.  For results based Internet users (n=1,655), the margin of sampling error is plus or minus 2.8 percentage points.  In addition to sampling error, question wording and practical difficulties in conducting telephone surveys may introduce some error or bias into the findings of opinion polls.

Non-response in telephone interviews produces some known biases in survey-derived estimates because participation tends to vary for different subgroups of the population, and these subgroups are likely to vary also on questions of substantive interest. In order to compensate for these known biases, the sample data are weighted in analysis. The demographic weighting parameters are derived from a special analysis of the most recently available Census Bureau’s March 2007 Annual Social and Economic Supplement. This analysis produces population parameters for the demographic characteristics of adults age 18 or older, living in continental US households. These parameters are then compared with the sample characteristics to construct sample weights. The weights are derived using an iterative technique that simultaneously balances the distribution of all weighting parameters. 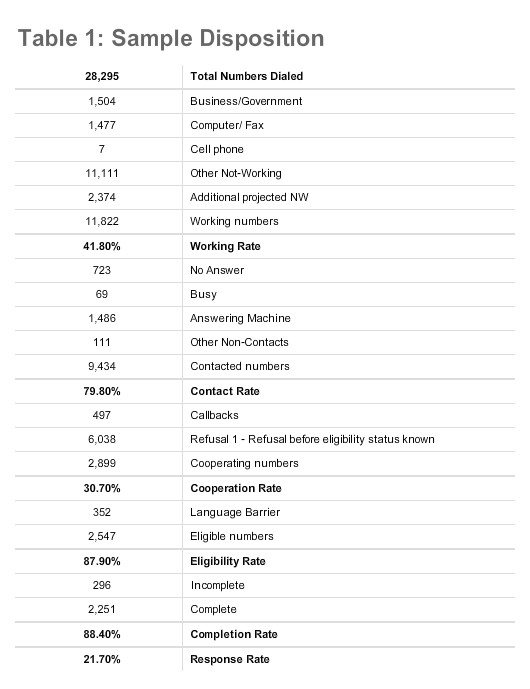 PSRAI calculates a response rate as the product of three individual rates:  the contact rate, the cooperation rate, and the completion rate.  Of the residential numbers in the sample, 80 percent were contacted by an interviewer and 31 percent agreed to participate in the survey.  Eighty-eight percent were found eligible for the interview.  Furthermore, 88 percent of eligible respondents completed the interview.  Therefore, the final response rate is 22 percent.