Thus far we have discussed online political activities for which there is a clear offline counterpart—for example, emailing a government official vs. sending a letter, or donating money online vs. doing so offline. A key finding of this analysis is that the ability to take action online is not necessarily bringing into political activity the kinds of people who do not usually take part. Indeed, to the extent that those with low levels of income or education are less likely to be online in the first place, such differences may even be exacerbated in the internet era.

However, the development of new forms of communication on the internet—like blogs and social networking sites—potentially expands the opportunities for civic engagement.  These rapidly developing modes of internet-based expression and communication are very much a work in progress.  At this point, we are in a position to pose questions, but not to draw definitive conclusions, about two significant matters.  First, in contrast to the activities we have discussed so far, might these new forms of interaction engage new kinds of people, thus offering an avenue for civic involvement to the historically inactive?  Second, will these new forms of communication, which often involve large numbers of people on the internet, have the effect of mobilizing people to undertake the kinds of activities, whether offline or on, that have the intent or effect of influencing government action — either directly by affecting the making or implementation of public policy or indirectly by influencing the selection of people who make those policies?  That is, will activities like writing about political issues on a blog or signing up as a friend of a candidate—like old-fashioned political discussions at dinner or at work—lead to political participation?

These forms of online political engagement are, quite simply, the domain of the young.

What is most unambiguous is that posting material about political or social issues on the Web and using social networking sites politically are forms of online engagement that are dominated by the young—especially the youngest adults.  Recall that, when it comes to the online political activities discussed earlier, within the population as a whole, the youngest adults (those 18 to 24) are less likely than other age groups to take part in online political activities and more likely to do so than those aged 65 and over.  This pattern is largely a function of the extraordinarily high rates of internet use by young adults—90% of whom go online. When we look just at internet users, 18-to-24 year olds are actually the least likely of all age groups to take part in such online political acts as emailing a public official or making an online political donation.

In contrast, civic involvement on social network sites and blogs exhibits a much different pattern. Whether we are looking at the population as a whole or only at those who are online, these modes of online civic engagement decline steadily with age—with the youngest adults much more likely than their elders either to make political use of social networking sites or to post material about political or social issues. Among internet users, just 18% of 18-to-24 year olds engage in two or more acts of political participation online based on the activities identified in the previous chapter, but fully 33% make political use of social networking sites, and 34% post political material on the Web. 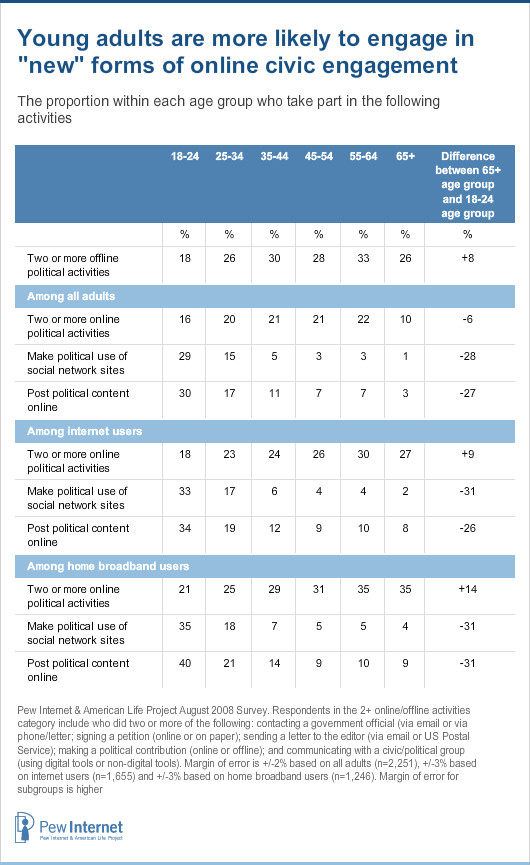 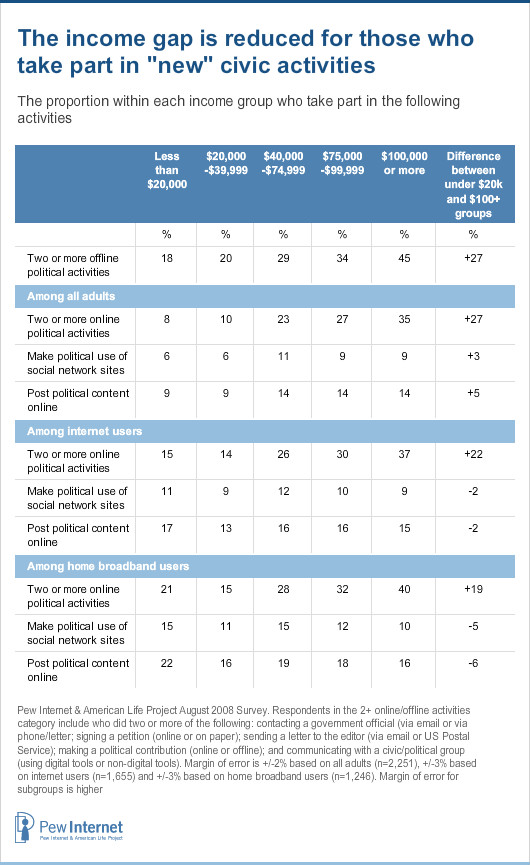 These forms of civic engagement are not simply drawing a more diverse mix of participants in terms of income—they are also more balanced in terms of education as well. The difference between college graduates and those with no college experience is 28 percentage points for both of the online and offline scales of political activity we discussed earlier. By contrast, the difference between these groups when it comes to engaging politically on social networking sites or posting political material is just 7 percentage points. 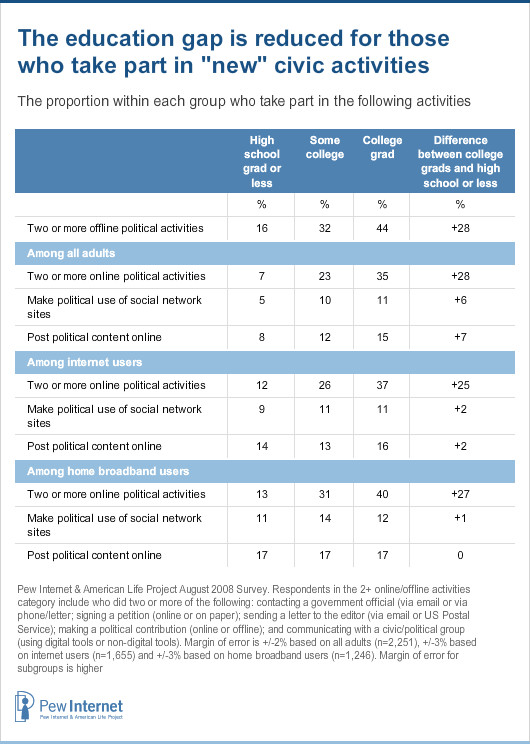 However, we must be cautious before concluding that these rapidly evolving, internet-based forms of political engagement will disrupt the long-standing association between education or income and various forms of political involvement. Assessing the strength of the relationship between socio-economic status and either political involvement on social networking sites or posting material about political or social issues on the Web is complicated by the fact that these forms of engagement are the province of the youngest citizens—for whom measuring socio-economic status (SES) is problematic. Because many of them are still in school or are just setting out in the work force, the 18-to-24 year olds who constitute such a disproportionate share of those who engage in these forms of internet use have not yet come to rest in terms of level of income or education and are, in fact, the least affluent and least well-educated group in the survey. Thirty-four percent are in the lowest income category, and 62% have not graduated from high school.  The analogous figures for their immediate elders, those who are 25 to 34, are markedly different: 16% and 36% respectively. And, unlike the elderly, who also have relatively low levels of income and education, and the youngest adults are likely to see improvements in their educational attainment and income in the near future.

Unfortunately the relatively small number of 18-24 year olds in our survey prevents us from conducting a detailed analysis of this subgroup. However, we can gain some insight into the relationship among age, socio-economic status and these forms of internet-based engagement by isolating those under the age of 30 and comparing different subgroups within this cohort.

Considering those under thirty, we see familiar patterns for the association between online political activity and both education and income. Furthermore, when it comes to political engagement on social networking sites or posting political content online, similar patterns emerge for income but not for education. What is most striking, however, is the strong relationship between being a student and these measures of online political engagement. Among those under thirty, students are much more likely than those who are not in school both to make political use of a social networking site and to post political material online. Thirty-nine percent of the students, but only 16% of the non-students, make political use of social networking sites. The analogous figures for posting political information online are 39% and 15% respectively. 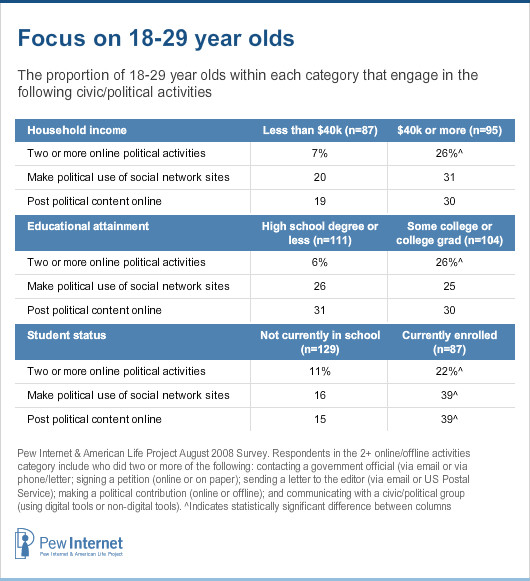 Hence, we must watch carefully to see whether these new modes of online political engagement will act as a trip wire interrupting the usual patterns of stratification of political involvement by income and education. We will have to see whether the fascinating patterns that have emerged in this survey—one that was conducted during a particular and in many ways atypical presidential campaign—will recur though time.  What is more, we will have to see whether the internet continues to evolve politically, offering still more possibilities for political engagement and participation.

Will the students who have embraced the political possibilities of the internet so much more fully than their elders continue to act as early political adopters or will they be locked into their youthful technological experiences only to be trumped by a succeeding generation in the vanguard of the political uses of the Web? Furthermore, will these forms of internet-based political engagement which entail opportunities for political expression and communication among large numbers of dispersed people foster the forms of political participation that involve attempts to influence political outcomes?

Next: Methodology and Acknowledgements
← Prev Page
Page1Page2Page3You are reading page4Page5
Next Page →

The Internet and Civic Engagement The Current State of Civic Engagement in America The Demographics of Online and Offline Political Participation
Will Political Engagement on Blogs and Social Networking Sites Change Everything?
IntroductionThese forms of online political engagement are, quite simply, the domain of the young.
Methodology and Acknowledgements