Traditional offline political participation has long been the domain of certain groups: in particular, those with high levels of income and education. As opportunities for political activity have expanded with the internet, we wished to know whether these possibilities for online political engagement have potential to change that pattern. Does the internet bring in new kinds of activists by making it easier to take part politically, or does online engagement simply mirror the stratification seen in traditional offline civic activities?

To explore this question, we constructed separate scales measuring political participation on and off the internet, each containing five political activities that can be conducted either online or offline. These measures were:

In addition to analyzing overall involvement along these two dimensions, we also considered the activities individually.  In conducting this analysis, we sought to address the following questions:

Online political activities are marked by the same high levels of stratification by income and education as their offline counterparts.

Nearly all traditional forms of civic activity are stratified by socio-economic status. That is, as income and educational levels increase, so do community involvement, political activism, and other types of civic engagement. This stratification holds not only for offline political acts but also for political participation online. One in five (18%) of those in the lowest income category (who earn less than $20,000 per year) take part in two or more offline activities, compared to 45% of those earning $100,000 or more per year, a difference of 27 percentage points.  For online acts the difference between these two income groups is identical: 8% of those in the lowest income category as opposed to 35% for those in the highest income group. 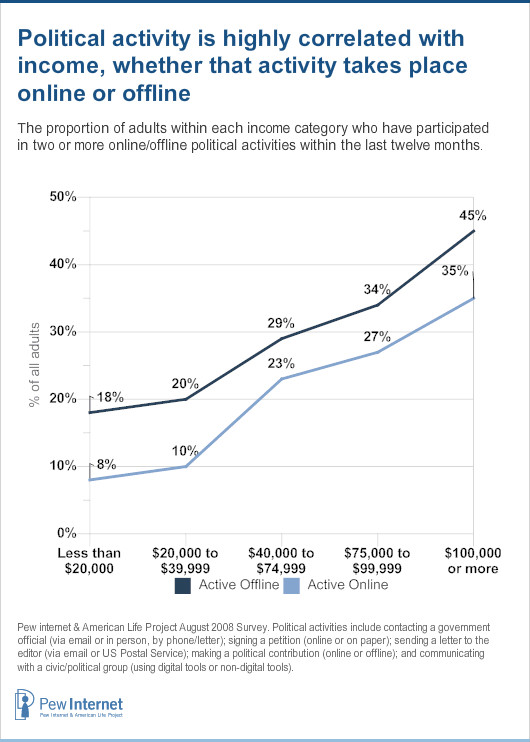 To be sure, access to the internet is part of the story. Those with higher levels of income are much more likely than those at lower levels of income both to use the internet and to have high-speed internet access at home. Moving from the lowest income category to the highest, internet usage rates rise from roughly 50% to more than 90%, and home broadband adoption rises from roughly one in three to nearly nine in ten.  Thus, at least one factor responsible for lower levels of online political activity among those at the lower end of the income spectrum is lack of internet access. 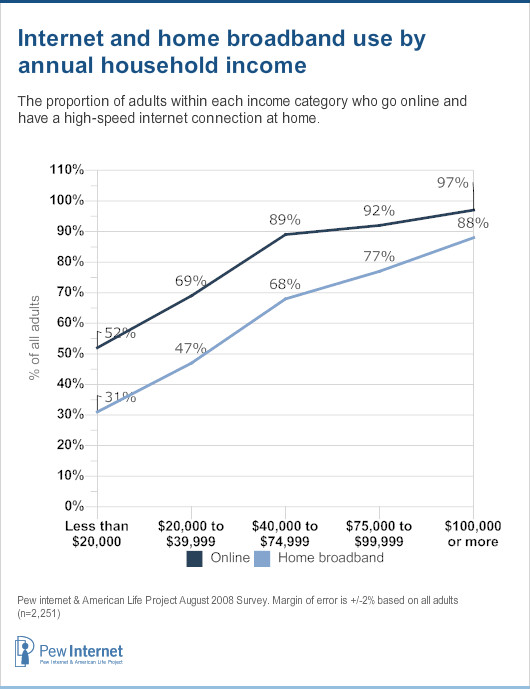 Lack of internet access is a partial, but not a full, explanation for the lesser levels of online political activity among those with low levels of income.  When we consider three groups—all adults, internet users, and those have a home broadband connection—separately, we find that for all groups there is a strong relationship between online internet political activity and income. 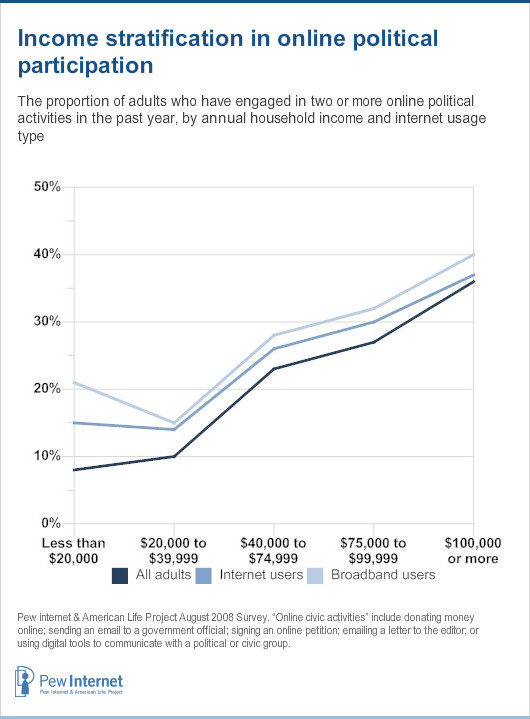 A similar pattern holds for education as well. Those with higher levels of education (some college experience or a college degree) are much more likely to take part politically than are those with a high school diploma or less — regardless of whether that political activity occurs online or offline. Even among who use the internet, college experience is strongly associated with participation in online political activities. 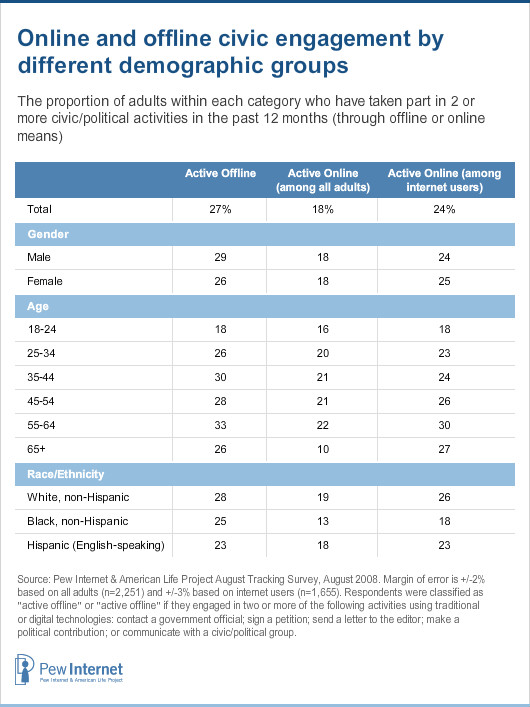 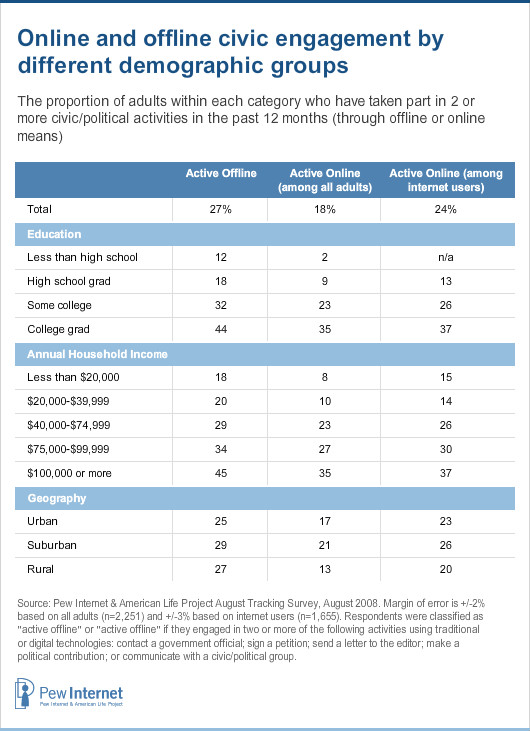 Compared to income and education, the relationship between age and these political activities is somewhat more complex. For offline political participation, young adults (those ages 18-24) are the group that is least likely to take part.  In contrast, when it comes to online political activity, for the population as a whole, the participatory deficit of young adults is less pronounced, and it is seniors who are the least active group.  This relationship, however, is largely a function of very high rates of internet use among young adults. When we consider just the internet users within each age cohort, young adults are again the least likely group to engage in political acts online, and the relatively small group of internet users who are 65 and over are quite active.  In other words, the underrepresentation of the young with respect to political participation over the internet is related to their greater likelihood to be internet users and not necessarily to any innate propensity to use the internet politically once online. 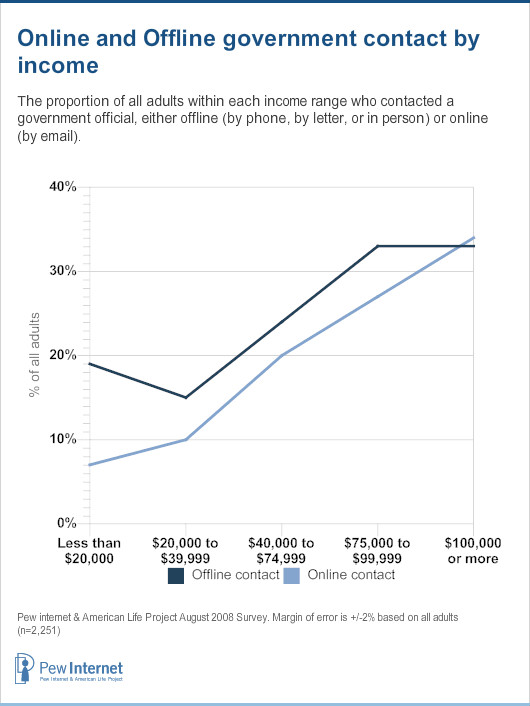 As with the broader measure of online political participation discussed earlier, low rates of internet access among lower-income Americans tell part, but only part, of the story. Even when we focus on those respondents who go online or have a high-speed connection at home, those at the high end of the income scale are still much more likely than those at the bottom to contact a government official via email. 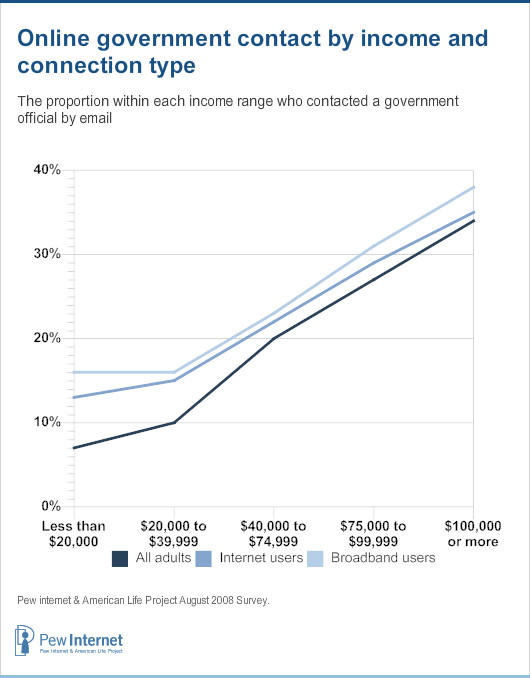 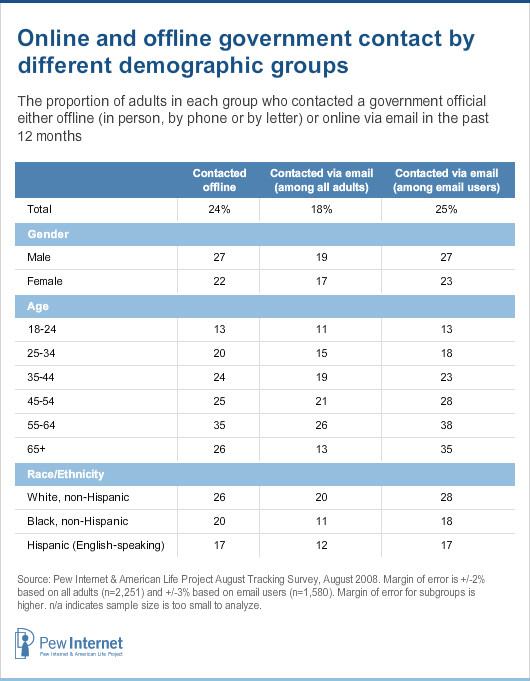 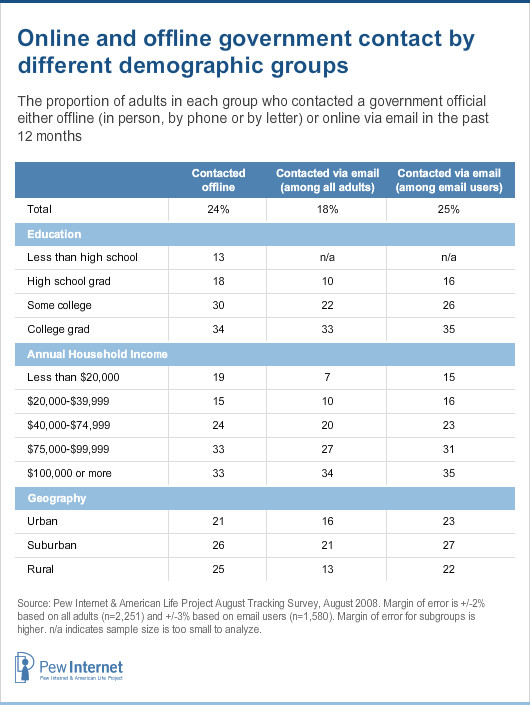 The second individual activity that drew our interest is donating money to a political candidate, party or other political organization. Because it offers the potential to bring new voices into the political system, we were particularly interested in investigating the making small donations online.

As with the other activities we have examined, the likelihood of making political contributions rises steadily with income. Just 9% of those with incomes under $20,000 per year made one or more political contributions in 2008, compared to more than one-third (36%) of those with incomes over $100,000—a difference of 27 percentage points. As might be expected, this difference shrinks as the amount donated decreases. For donations under $100, the difference between the lowest and highest income groups is 11 percentage points.  For donations of less than $50 the difference between these two groups is substantially smaller: 5% of those in the lowest income group, compared to 8% of those in the highest, made a small donation of $50 or less.

Interestingly, these differences do not exhibit a great deal of variation for online versus offline donations.  The difference between the lowest and highest income categories with respect to making small contributions of no more than $50 is nearly identical for online versus offline donations—2% versus 3%. In other words, the ability to make small donations online does not in and of itself appear to be drawing large numbers of low-income small contributors into the political system. However, it is important to reiterate that this survey was conducted in August, prior to Barack Obama’s autumn online fundraising push, and should be interpreted accordingly. 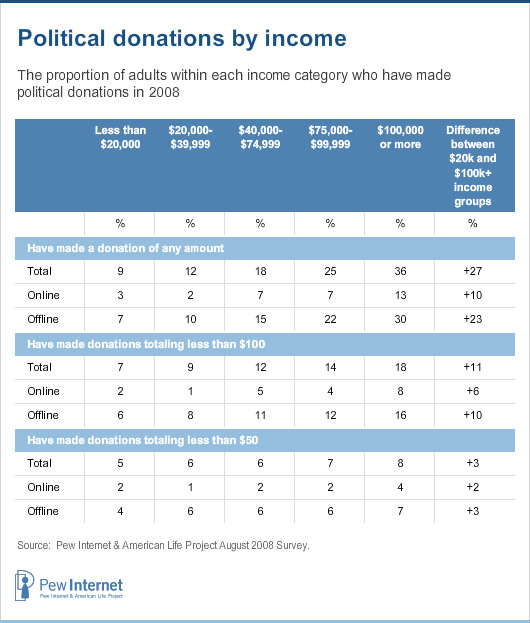 Next: Will Political Engagement on Blogs and Social Networking Sites Change Everything?
← Prev Page
Page1Page2You are reading page3Page4Page5
Next Page →

The Internet and Civic Engagement The Current State of Civic Engagement in America
The Demographics of Online and Offline Political Participation
IntroductionOnline political activities are marked by the same high levels of stratification by income and education as their offline counterparts.
Will Political Engagement on Blogs and Social Networking Sites Change Everything? Methodology and Acknowledgements