52% of internet users look online for information about exercise or fitness.

American adults have stepped up their searches for exercise and fitness tips over the last six years. Among internet users, the percentage of those seeking fitness information has jumped from 36% in the year 2002 to 52% now – one of the biggest growths since 2002 out of all health searches. 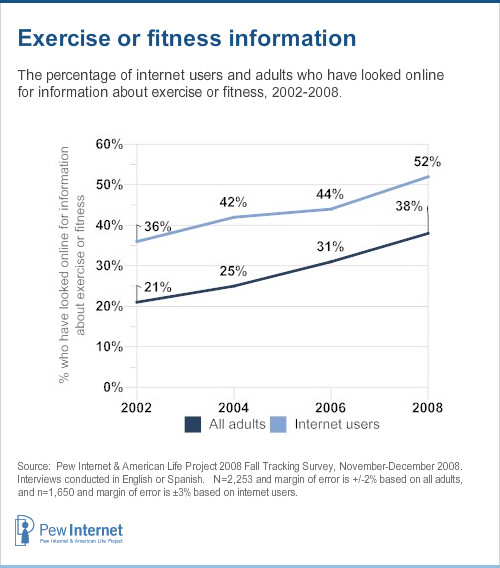 Younger and more educated internet users are significantly more likely than their counterparts to have looked online for fitness information.

African American internet users, internet users with a college degree, and internet users ages 30-49 lead all other groups in their pursuit of online fitness tips, each registering at least a 20-point increase between 2002 and 2008. In particular, 30-49 year old internet users gained ground on 18-29 year olds, compared with whom they were significantly less likely to look up fitness information in 2002. 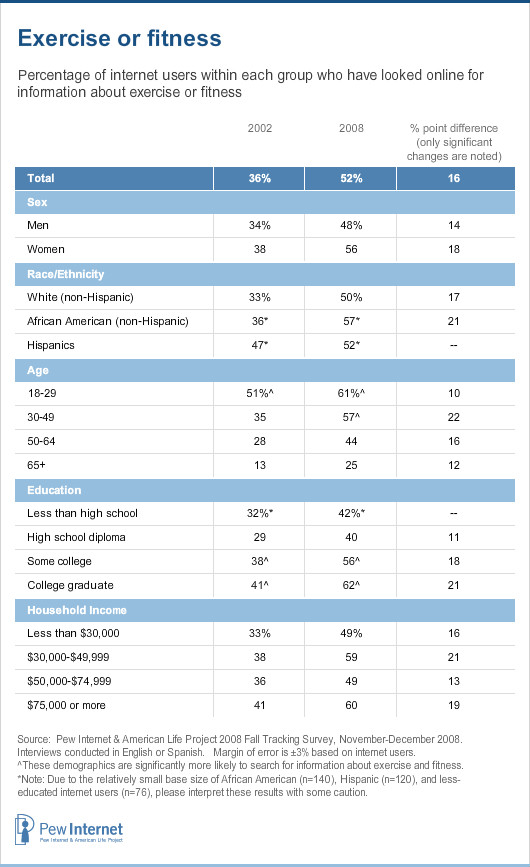 Next: Doctors or other health professionals
← Prev Page
Page1Page2Page3Page4Page5Page6Page7Page8You are reading page9Page10
Next Page →

The Social Life of Health Information A Shifting Landscape Social Media and Health The Social Life of Health Information The Impact of Online Health Resources Trends to Watch Specific disease or medical problem Certain medical treatment or procedure
Exercise or fitness
52% of internet users look online for information about exercise or fitness.Demographics
Doctors or other health professionals Prescription or over-the-counter drugs Hospitals or other medical facilities Health insurance Alternative treatments or medicines Weight loss or weight control Depression, anxiety, stress or mental health issues Other health issue not listed in the survey Experimental treatments or medicines How to stay healthy on a trip overseas About the Sponsors, Methodology