One in four online teens make friends on social networks.

Teens told us in their own words about how they use social network sites to make friends and communicate with people. For some teens it is how they make new friends “I like it. I just like networking, that’s about it,” said one late high school-aged boy. “…my school is pretty big, so if I didn’t know a person I can meet them through MySpace and just see them at school then. That’s how I make friends, I guess.” Another high school boy echoed his sentiments: “When you look at their profile you get to see who they are and see if they might like the same things you like. You might like how they look or something like that.”  And for some teens, high school-aged boys in particular, it is a way to meet and approach potential romantic partners. One high school boy said, “Yes, like if you’re just on there and you’re looking through and you see a good-looking girl on there and she wants to be my friend and you accept!”

For some teens, making friends on social networks is less about finding common ground, and more about avoiding giving offense. One middle school-aged girl told us “My friends will have friends that I don’t know. You look at them…Then you feel bad because they’re like, ‘Oh, well, I just saw you in this play, be my friend.’ And then you’re like, ‘Okay.’ All right, you know, why not.”  Another middle school girl elaborated, “I mean, I’m not really making new friends, I’m just not hurting peoples’ feelings. If I know that they’re friends with someone else that I don’t feel like they’re [going to] come and attack me, and so it’s safe.”

16% of teens are connected to “friends” on social networking sites who they have not met in person.

Some un-met online friends are connected through other friends…

To look at the data another way, 70% of social networking teens with un-met “friends” say some of these people have a connection to their offline friends – people like a chemistry partner’s older sister, or the cousin of a good friend. It also could be that these friends have simply been “friended” by another friend of the social network user, and are in fact, true strangers with no offline connection. There are not statistically significant differences between age groups and girls and boys with these kinds of online friends.

…Others have friends in their social networks that neither they nor their friends have ever met.

A small subset of teens with unmet friends in their social network say that some of these friends have no connection to their online or offline friends. This group represents just 9% of online teens and a bit more than half (53%) of teens with un-met friends. However, the practice of “friending” celebrities, musicians and political candidates in order to be affiliated with them in some way is a popular practice on social networks, and we do not know how many of these profiles account for links to unmet and unknown online “friends.”

“i have a myspace and a xanga. most of the people i meet online are friends of friends of mine so i know they’re really who they say they are and stuff. i think its really good. i got to know one of my present best friends thanks to myspace.”

“I know when I get a friend request, if I don’t know the person I won’t automatically deny them, I’ll go to their page and see who’s in their top eight and see if I know any of their friends… They’re not like strangers if your good friend knows them, like they are to you, but it’s not like they’re dangerous.”

In our first study of teen internet usage in 2000, we reported that 57% of parents were worried that strangers would contact their children online. At that time, close to 60% of teens had received an instant message or email from a stranger and 50% of teens who were using online communication tools said they had exchanged emails or instant messages with someone they had never met in person.

In our current study, online girls (39%) and older teens ages 15-17 (41%) were more likely than boys or younger teens to have been contacted online by a stranger. Older girls were the most likely to report some kind of stranger contact, with half (51%) saying that they had been contacted online by someone unknown to them. Only 30% of older boys report similar stranger contact.

However, as in the offline world, stranger contact can take many forms. An unsolicited spam email message, instant message or comment from a stranger might be cause for alarm and distress or it may simply get deleted or ignored by the teen. And some strangers who contact teens may, in fact, turn out to be like-minded peers in search of friends. 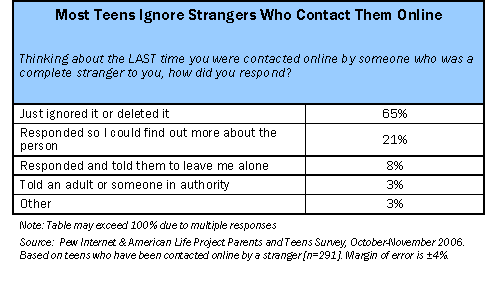 Most teens ignore or delete stranger contact and are not bothered by it.

Out of all the teens contacted online by strangers, the vast majority of them responded to the most recent occurrence by ignoring or deleting the contact. Nearly two-thirds (65%) of teens who had been contacted by a stranger ignored or deleted the contact. Another 21% of contacted teens responded to the stranger so that they could find out more about the person. Older teens, and particularly older teen boys, were more likely to respond to the stranger contact with requests for more information to assess the level of threat posed by the communication.

“It gets weird.  I think two weeks ago I got a request.  And one of my friends hit approve.  And the person, this guy started sending me weird comments…
And he’s sending me these comments like oh, you’re so hot, where do you live? I want to meet you.
That gets a little weird.”

Another 8% of teens who were contacted by people unknown to them responded to the most recent contact by responding and telling the author to leave them alone. Just 3% of teens told an adult or someone in authority and another 3% took some other kind of action, including blocking the person from contacting them, or asking the individual to identify themselves with their real name.

While profile-owning and social network-using teens are more likely to have been contacted online by strangers, their behavior in response to the stranger contact is not significantly different from online teens who do not have a profile and who do not use social networks.

“yeah ive had instant messages from random people i didnt know. i was really uncomfortable but usually its a friends friend. and if its not i bs everything about myself or i just ignore them or block them all together.”

7% of online teens say they have been scared or uncomfortable after being contacted by a stranger online.

“My brother got into an online relationship with
a [older] girl.  He told her where he lived and she
moved to [town] the next week.  She would
show up at our house.  She followed me around.
‘Where is your brother?’”

Teens feel that they are more accessible to strangers when they are online.

“My cousin met this guy.  He seemed nice.  He said he was 16 and went to a military academy.  He gave my cousin his cell phone number.  I think he did that so he could get hers.  She called him.  He really was 16.  When she called him he got all her information.  He got her phone number and kept on calling her.”

Teens appear to be acting on the awareness that they are more accessible to outside contact when they are online. For the most part, the warnings and concern coming from parents and educators are not falling on deaf ears. While a first name and a photo are standard features of most teenagers’ online profiles, they rarely post personal information such as their full name, home phone number or cell phone number to a public profile. Other research echoes these findings; a recent content analysis study of 1,475 randomly selected MySpace profiles by Criminal Justice professors at Florida Atlantic University and the University of Wisconsin found that a large segment of teens restricted access to their profiles, and of those with public profiles, a small minority included personal information such as a full name or cell phone number.10

Older boys consider themselves to be more accessible and are more likely to make new friends through social networking sites.

While older girls are, in many ways, the power users of social networking sites and have been the primary focus of safety concerns, older boys are the ones who are most likely to use the sites to make new friends. Fully 60% of older boys who use social networking sites say they use them to make new friends, compared with just 46% of older girls, and roughly the same segment of younger boys (44%) and younger girls (48%).

Older boys are also more likely to say it would be “pretty easy” to find out who they are from the information posted to their profile; 36% of older boys with profiles report this, compared with 23% of older girls and smaller segments of younger boys (18%) and younger girls (11%).

Teens who use social networking sites to meet new friends are more accessible to strangers, but are no more likely to have experienced stranger contact that made them scared or uncomfortable.

In general, looking at both boys and girls, teens who say they use social networking sites to make new friends are more likely than the average profile-owning teen to have a publicly viewable profile. These “friending” teens who are deliberately trying to meet new people are also more likely to post photos of themselves, as well as links to their blog on their profile. More of these “friending” teens have unmet friends in their network when compared with the average profile-owning teen, and they are more likely to have been contacted by a stranger online. However, they are no more likely to have experienced a contact that made them scared or uncomfortable.

This suggests several possible implications that might be explored in future research. First, since boys are more likely to use the sites for friending, and are much more likely to have unmet friends in their network, a special analysis of teen girls who actively make new friends on the networks would help to explain the extent to which girls’ negative experiences with stranger contact may or may not be related to networking activity on the sites. Second, those who have had a negative experience with stranger contact online may be more wary of using social networking sites to make friends, and may now make more conservative choices about the information they disclose online as a result of their experiences. As a result, they may have eschewed social networking sites altogether, or simply made the choice to restrict access to their profile. This sample was too small to yield reliable answers to these questions, but future studies that focus on those who have had negative experiences would shed additional light on the privacy choices teens make in different online contexts and in response to different experiences.