More than half of online teens use social networks. 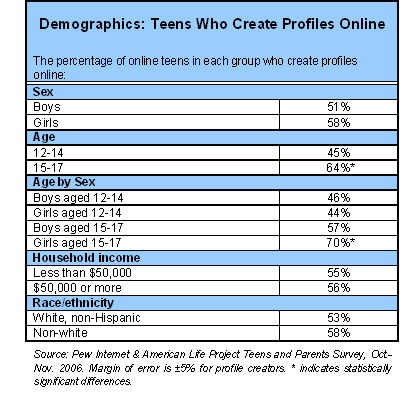 Online social networks are spaces on the internet where users can create a profile and connect that profile to others to create a personal network. Social network users post content to their profiles and use tools embedded with in the social networking websites to contact other users.

Age is a particularly important factor for understanding teen use of social networks. For 12 and 13 year olds, social network use is not as prevalent, with just two in five (41%) of teens those ages using the sites. Once teens approach or enter high school, their use jumps — 61% of teens 14-17 use online social networks.

MySpace dominates the social networking realm, with more than 85% of teens with online profiles saying that the profile they use or update the most resides on that site. Following on its heels is Facebook, with 7% of profile-owners updating their Facebook profile most regularly.  Another 1% have a profile on Xanga and others told us that they have a presence on sites like Yahoo, Piczo, Gaiaonline and Tagged.com, among others.%%FOOTNOTE%%

Parents usually know if their teen has a profile online.

Social networking websites offer a variety of ways for users to communicate with people both in and out of their personal social network. There are private messages that can be sent from user to user, but there are also more public means of communicating within the social networking space. A user can post messages to a friend’s page or wall, send a bulletin or group message to a user’s network, post comments to a friend’s blog, or give e-props, “pokes” or kudos by posting small icons to a friend’s page. An early high school-aged boy explained how it works in our focus group: “People send friend requests so you can approve or deny it and you can ask to be someone’s friend, so once you approve them you can post comments about them and receive comments from them, but if you’re not friends with someone they can still give you messages.” 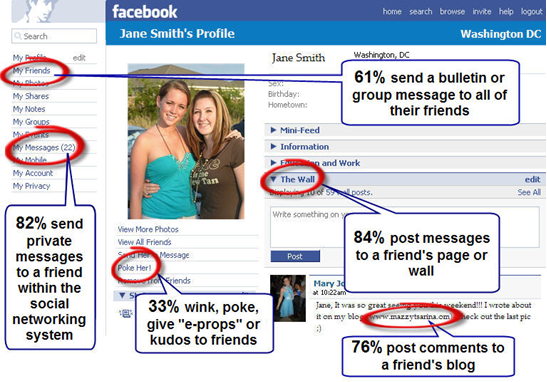 One of the major reasons why teens are such enthusiastic users of social network sites is that the sites give them opportunities to present themselves to a group of peers and then get feedback and affirmation via the content tools built into the online social networking system. Teens get to feel like they are a part of a group of like-minded friends, and can visualize their network of relationships, displaying their popularity for others. This sentiment was expressed repeatedly in our in-person focus groups as well as in online forums where teens discussed the appeal of social networking sites.

Here are some of the most illustrative comments:

“Part of what people like about it is when you go on and you do your profile and there’s this little box at the bottom that tells you if you have a new friend request or new comments and so you click on it and then you see what’s going on.” – Boy, Early High School

“If you wait more days then they accumulate more.”  – Boy, Early High School

“And you feel special when you have a picture comment.” – Girl, Middle School

“It’s a sense of attention.  For some people it’s like ‘well, people know I exist, I’m there, people acknowledge me,’ you know you feel like you’re a part of something.” – Boy, Early High School

“It’s like there’s a sense of like you can put your interests and stuff on there and people can be like ‘well, yes I like that too’ and stuff and you can start talking to someone and eventually it’s like you get friends from it.  Like you start meeting more people that have the same interests and you’re part of a group now.” – Boy, Early High School.

“It’s just sort of another way of communicating. There’s like [ways to] say ‘What’s going on?’ …and you can post funny things…and if you have friends who live in a different state or something and you don’t see them all the time, you can sort of use your MySpace as a way to keep in touch with them, or read what they’re doing.” – Girl, Middle School

“I go on MySpace. I have my own.  I do it to comment on people and look at other people’s MySpace.  You get to know their personality by their MySpace.  It says a lot about them just like how they decorate it and the pictures.” – Girl, Early High School

Next: Online Privacy: What Teens Share and Restrict in an Online Environment
← Prev Page
Page1Page2Page3You are reading page4Page5Page6Page7
Next Page →