Many teenagers avidly use social networking sites like MySpace and Facebook, and employ a variety of tools and techniques to manage their online identities.

Online social networks are spaces on the internet where users can create a profile and connect that profile to others to create a personal network. Social network users post content to their profiles and use tools embedded within social networking websites to contact other users. Young adults and teenagers are among the most avid users of such websites.

A new survey and a series of focus groups conducted by the Pew Internet & American Life Project examines how teens understand their privacy through several lenses: by looking at the choices that teens make to share or not to share information online, by examining what they share, by probing for the context in which they share it and by asking teens for their own assessment of their vulnerability. For many online teens, particularly those with profiles, privacy and disclosure choices are made as they create and maintain social networking profiles. Of course, material shared in a profile is just one of many places where information is shared online – but it provides a snapshot into the choices that teens make to share in a relatively public and persistent online environment. Further, we went on to examine the interactions teens have with people unknown to them on social networking sites, exploring the nature of new friendships created on the networks, as well as unwelcome, and some times uncomfortable or scary stranger contacts.

Most teenagers are taking steps to protect themselves online from the most obvious areas of risk. The new survey shows that many youth actively manage their personal information as they perform a balancing act between keeping some important pieces of information confined to their network of trusted friends and, at the same time, participating in a new, exciting process of creating content for their profiles and making new friends. Most teens believe some information seems acceptable – even desirable – to share, while other information needs to be protected.

Still, the survey also suggests that today’s teens face potential risks associated with online life. Some 32% of online teenagers (and 43% of social-networking teens) have been contacted online by complete strangers and 17% of online teens (31% of social networking teens) have “friends” on their social network profile who they have never personally met.

Here is a general statistical snapshot of how teens use social network sites and the way they handle their privacy on them:

Teens post a variety of things on their profiles, but a first name and photo are standard.

Fully 55% of online teens have profiles; here is a rundown of the kinds of information they post:

Boys and girls have different views and different behaviors when it comes to privacy.

Girls and boys differ in how they think about giving out personal information online. Online, girls are more likely than boys to say that they have posted photos both of themselves and of their friends onto their online profile. Boys are more likely to say they have posted the city or town where they live, their last name and their cell phone number when compared with girls.

In our focus groups, girls were, in general, more concerned than boys about the release of any information that can be linked to one’s physical location.

“I use a pseudonym, who is 24. Because I
regard myself as an intellectual, it’s easier
to be taken seriously if people don’t know
they’re talking to a 16 year old. You’d
be surprised what respect 8 years buys you.”

To teens, all personal information is not created equal. They say it is very important to understand the context of an information-sharing encounter.

One of the primary questions animating policy discussions about teens’ use of social network sites is framed this way: Are today’s teens less concerned about their privacy because the internet gives them so many opportunities to socialize and share information?

Our survey suggests that there are a wide range of views among teens about privacy and disclosure of personal information. Whether in an online or offline context, teenagers do not fall neatly into clear-cut groups when it comes to their willingness to disclose information or the ways they restrict access to the information that they do share. For most teens, decisions about privacy and disclosure depend on the nature of the encounter and their own personal circumstances. Teen decisions about whether to disclose or not involve questions like these: Do you live in a small town or big city? How did you create your network of online “friends?” How old are you? Are you male or female? Do your parents have lots of rules about internet use? Do your parents view your profile?  All these questions and more inform the decisions that teens make about how they present themselves online. Many, but not all, teens are aware of the risks of putting information online in a public and durable environment. Many, but certainly not all, teens make thoughtful choices about what to share in what context.

Teens who have online profiles are generally more likely to say it is okay to give out certain pieces of personal information in offline situations than they are to have that information actually posted to their profile. Teens with online profiles have a greater tendency to say it is fine to share where they go to school, their IM screen name, email address, last name and cell phone number with someone they met at a party, when compared with the percentage who actually post that information online. The only piece of information they are more likely to share online rather than in person with a new acquaintance is the city and state where they live.

Most teen profile creators suspect that a motivated person could eventually identify them. They also think strangers are more likely to contact teens online than offline.

One in three (32%) online teens have been contacted online by a stranger. Among those contacted by strangers, two-thirds (65%) said they ignored the contact or deleted it the last time it happened to them. Some 21% have followed up on the encounter by asking for more information from the person contacting them.

Parents are using technical and non-technical measures to protect their children online.

Parents generally think that the internet is a good thing for their children, but few give their children unfettered access at home. Most teens whose online behavior is monitored by their parents recognize that they are being observed.

“My parents limit my time on the Internet. I can
only spend about 1-2 hours of non-school work time
on it. They try checking up on me but I can get away
with a lot if I wanted. They make sure to tell me
never to meet people on it because people
pretend to be someone they are not.”

The internet is a more regulated piece of technology than the television or video game console. Parents are more likely to restrict the type of content their children view online, as well as the amount of time spent on the internet when compared with other media. 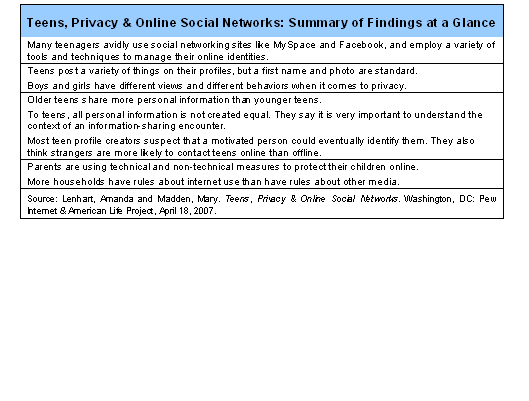