Blogging is bringing new voices to the online world.

A telephone survey of a nationally-representative sample of bloggers has found that blogging is inspiring a new group of writers and creators to share their voices with the world. Some 54% of bloggers say that they have never published their writing or media creations anywhere else; 44% say they have published elsewhere. While generally youthful, these writers otherwise represent a broad demographic spectrum of people who cite a variety of topics and motives for their blogging.

First, as part of our standard random-digit dial tracking surveys about internet use among a nationally-representative sample of American adults, we asked respondents if they maintain a blog. Then, we called back these self-identified bloggers between July 2005 and February 2006. Seventy-one percent of those called back completed this second telephone survey, which focused exclusively on blogging. The remaining 29% said they were no longer keeping a blog or were not willing to take another survey, and we eliminated them from the callback interviews. This strategy yielded a relatively small number of respondents (n=233) but allowed us to ask in-depth questions of a nationally-representative sample of bloggers. Numbers cited in this report are based on the callback survey unless specifically noted.

Our second strategy for preparing this report involved fielding additional random-digit surveys between November 2005 and April 2006 to capture an up-to-date estimate of the percentage of internet users who are currently blogging. These large-scale telephone surveys yielded a sample of 7,012 adults, which included 4,753 internet users, 8% of whom are bloggers.

While many well-publicized blogs focus on politics, the most popular topic among bloggers is their life and experiences.

The Pew Internet Project blogger survey finds that the American blogosphere is dominated by those who use their blogs as personal journals. Most bloggers do not think of what they do as journalism.

Most bloggers say they cover a lot of different topics, but when asked to choose one main topic, 37% of bloggers cite “my life and experiences” as a primary topic of their blog. Politics and government ran a very distant second with 11% of bloggers citing those issues of public life as the main subject of their blog.

Entertainment-related topics were the next most popular blog-type, with 7% of bloggers, followed by sports (6%), general news and current events (5%), business (5%), technology (4%), religion, spirituality or faith (2%),  a specific hobby or a health problem or illness (each comprising 1% of bloggers). Other topics mentioned include opinions, volunteering, education, photography, causes and passions, and organizations.

The blogging population is young, evenly split between women and men, and racially diverse.

Despite the public nature of creating a blog, most bloggers view it as a personal pursuit.

The main reasons for keeping a blog are creative expression and sharing personal experiences.

The majority of bloggers cite an interest in sharing stories and expressing creativity. Just half say they are trying to influence the way other people think. 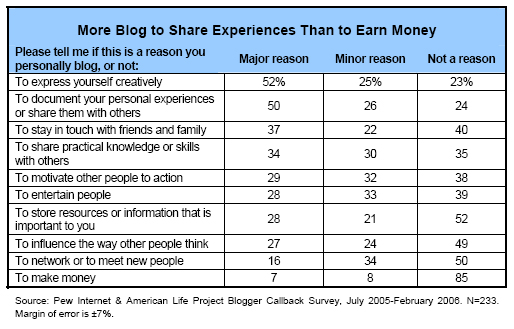 Only one-third of bloggers see blogging as a form of journalism. Yet many check facts and cite original sources.

Bloggers are avid consumers and creators of online content. They are also heavy users of the internet in general.

Fully 79% of bloggers have a broadband connection at home, compared with 62% of all internet users. This high-speed access translates into heavy media consumption and creation.1 For example:

Bloggers are major consumers of political news and about half prefer sources without a particular political viewpoint.

Bloggers often use blog features that enhance community and usability.

Community-focused blogging sites LiveJournal and MySpace top the list of blogging sites used in our sample, together garnering close to a quarter (22%) of all bloggers. Features such as comments, blogrolls, friends lists, and RSS feeds on these and other blogging sites facilitate a sense of community and offer readers additional ways to receive and interact with the blog’s content. 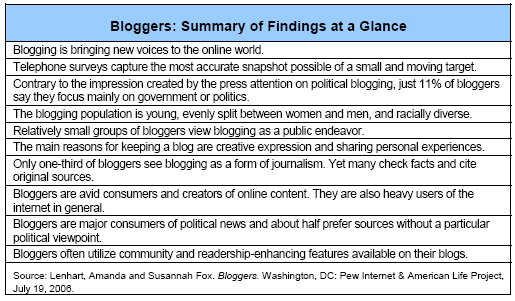