There are still notable differences by generation in online activities, but the dominance of the Millennial generation that we documented in our first “Generations” report in 2009 has slipped in many activities.

Milliennials, those ages 18-33, remain more likely to access the internet wirelessly with a laptop or mobile phone. In addition, they still clearly surpass their elders online when it comes to:

However, internet users in Gen X (those ages 34-45) and older cohorts are more likely than Millennials to engage in several online activities, including visiting government websites and getting financial information online.

Finally, the biggest online trend: While the youngest and oldest cohorts may differ, certain key internet activities are becoming more uniformly popular across all age groups. These include:

Even in areas that are still dominated by Millennials, older generations are making notable gains. Some of the areas that have seen the fastest rate of growth in recent years include older adults’ participation in communication and entertainment activities online, especially in using social network sites such as Facebook. Among the major trends in online activities:

Additionally, searching for health information, an activity that was once the primary domain of older adults, is now the third most popular online activity for all internet users 18 and older.

Few of the activities covered in this report have decreased in popularity for any age group, with the notable exception of blogging. Only half as many online teens work on their own blog as did in 2006, and Millennial generation adults ages 18-33 have also seen a modest decline—a development that may be related to the quickly-growing popularity of social network sites. At the same time, however, blogging’s popularity increased among most older generations, and as a result the rate of blogging for all online adults rose slightly overall from 11% in late 2008 to 14% in 2010. Yet while the act formally known as blogging seems to have peaked, internet users are doing blog-like things in other online spaces as they post updates about their lives, musings about the world, jokes, and links on social networking sites and micro-blogging sites such as Twitter.

This is the second report by the Pew Research Center’s Internet & American Life Project exploring how different generations use the internet.1 All the generation labels used in these reports, with the exceptions of “Younger Boomers” and “Older Boomers,” are the names conventionalized by William Strauss and Neil Howe in their book, Generations: The History of America’s Future, 1584 to 2069 (Perennial, 1992). The Pew Internet Project’s “Generations” reports make the distinction between Younger Boomers and Older Boomers because enough research has been done to suggest that the two decades of Baby Boomers are different enough to merit being divided into distinct generational groups. 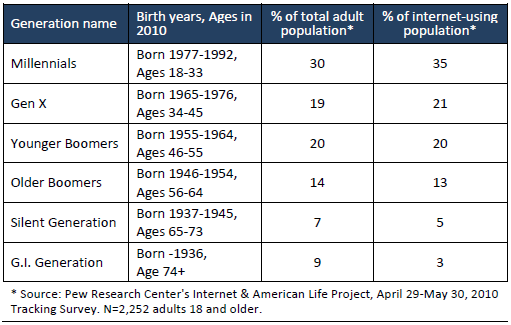 This year, the Pew Research Center published a series of reports that more closely examined the values, attitudes and experiences of the Millennial generation, which generally encompasses teens and Millennials. These reports are available in full at pewresearch.org/millennials. Many of these reports also compare this younger generation to older cohorts.

The primary adult data in this report come from a Pew Internet Project survey conducted from April 29 to May 30, 2010. The most current teen data in this study is from a separate Pew Internet survey of teens and their parents conducted from June 26 to September 24, 2009. For more information on these and other surveys cited in this report, including survey dates of all activities cited, please see the Methodology section at the end of this report.

Seventy-nine percent of all American adults go online, a number that has remained relatively steady since early 2006. While most generations have internet adoption rates of at least 70%, internet use drops off significantly for adults over age 65: only 58% of adults ages 65-73 (the Silent Generation) and 30% of adults age 74 and older (the G.I. Generation) go online. As a result, younger generations continue to be over-represented in the online population, with adults ages 45 and younger constituting about 56% of the online population, despite making up only 49% of the total adult population. The Millennial generation is particularly prominent online: though they make up 30% of the total adult population, they account for 35% of internet users. (Note: all data regarding generations within the context of the general U.S. population are from the May 2010 Pew Internet tracking survey of 2,252 adults 18 and older.) 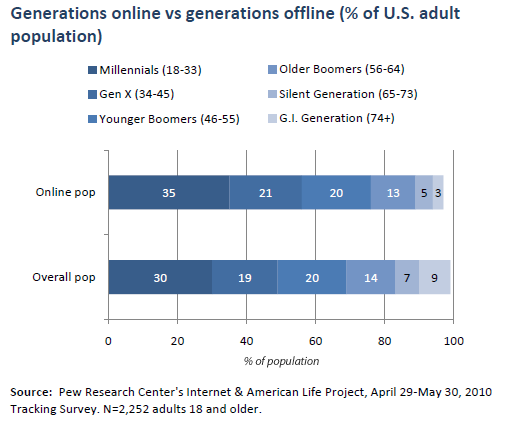 A plurality (31%) of non-internet users say that the main reason they do not go online is that they are simply not interested in doing so. Roughly one in nine (12%) cite not having a computer, and a similar proportion (10%) say that it would be too expensive. A full list of reasons is shown in the table below. 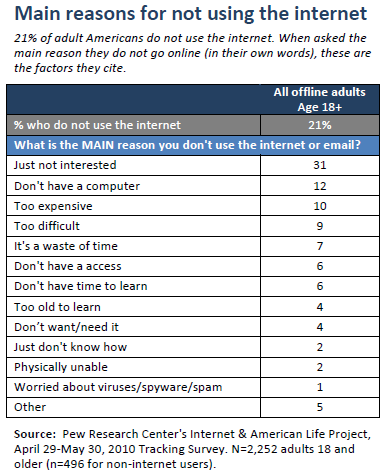 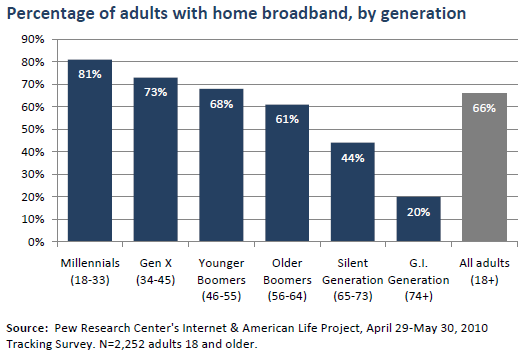 Roughly eight in ten (81%) of Millennials have broadband at home, as well as 73% of Gen X. The Silent Generation and the G.I. Generation are by far the least likely groups to have high-speed internet access, as only 44% of adults ages 65-73 and 20% of adults over the age of 74 have broadband at home. Of all the age groups, this cohort of adults over 65 are also the least likely to see the lack of home broadband as a major disadvantage, as detailed in our recent report, “Home Broadband 2010.”

About six in ten American adults (59%) go online wirelessly, either through their smartphones or through a wireless card in their laptop.3 Adults age 45 and younger are the most likely to connect to the internet with a laptop, cell phone, or other internet-connected mobile device, as 82% of Millennials and 71% of Gen X connect that way. Only 9% of the G.I. Generation go online wirelessly. 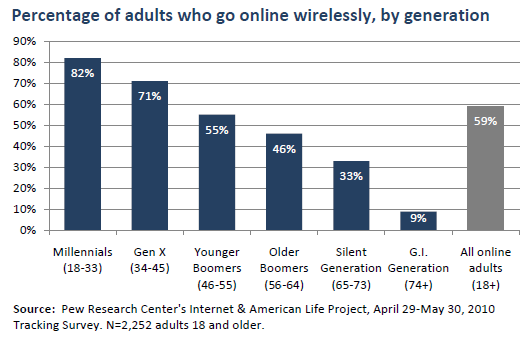 Next: Online Activities
← Prev Page
You are reading page1Page2Page3Page4Page5
Next Page →