The reality of a blogger’s publishing schedule is probably familiar to anyone who juggles a career, a personal life, and a favorite hobby: bloggers cram in their updates when and where they can, and when inspiration strikes.

The typical blogger spends about two hours per week on their blog.

On average, bloggers do not spend a great deal of time on their blogs. Six in ten bloggers (59%) report spending one to two hours a week on their blog, and another quarter spend 3 to 9 hours a week blogging.  One in ten (10%) spend ten or more hours a week tending their blog. Six percent did not answer the question or did not know how many hours they spent per week.  Younger bloggers, despite being more likely to keep a blog, generally spend fewer hours per week working on their blog.

A suite of user-friendly blogging tools became available in the summer of 1999, and the practice of blogging achieved high levels of media attention and public awareness during the 2004 presidential campaign. Thus, is it not entirely surprising that most bloggers have been blogging for three years or less.11

Most blog from home.

LiveJournal tops the list of blogging sites in this survey.

Some of the responses to this question illustrate the variety of definitions that people apply to blogging. Some respondents told us that they blogged on Facebook, which is generally not considered to be blog hosting software, but where links to blogs may be posted. Other respondents told us they blog at Slashdot, a large long-standing online community focused on technology issues that has been considered by some to be a massive multi-author blog. 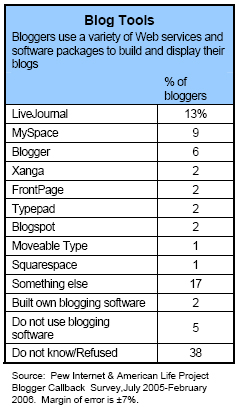 Among the various blogging software options, there are some demographic differences among their users. LiveJournal users are more likely to be female (22% of all female bloggers in our sample used LiveJournal compared with only 7% of the males) and young – nearly one in five of our 18-29 year old bloggers used LiveJournal.  Blogger had more than its share of college graduates with 13% of college-educated bloggers using Blogger and 12% using LiveJournal as compared with 4% of bloggers with college degrees who use MySpace and 2% who use Xanga.  MySpace has a larger share of bloggers who have not yet continued their education past high school.

Nearly half of all bloggers (49%) say they have posted images other than photos to their blog – items such as drawings, graphs or clip art.

“Vlog” – a shortened form of the word “videoblog,” which is a blog that features video clips

Blogging for pay is rare.

Even as a subset of bloggers gain prominence in the media and as traffic to blogs grows, blogging is not exactly the most lucrative of hobbies, let alone professions. Only 15% say earning money is a reason they blog and only 8% of bloggers report actual income. These bloggers are mostly older than age 50.

Selling items is the most popular way for this group of bloggers to raise money. About seven in ten bloggers who make money do so by selling things on their site. Bloggers can sell items branded with their own logo or sentiment through fulfillment sites such as CafePress.com or they can join something akin to the Amazon Associates program that allows individuals who recommend an item for sale on the Amazon site to receive a small payment every time someone uses the link the individual provides to purchase the recommended item.

Most expect to be blogging a year from now.

Blogging is bringing new voices to the online world
New data on blogs and blogging
The State of Blogging
Social Media and Young Adults
Quiz: Are you a Core Conservative? A Solid Liberal? Or somewhere in between?
How the Coronavirus Outbreak Has – and Hasn’t – Changed the Way Americans Work
Most Americans Are Critical of Government’s Handling of Situation at U.S.-Mexico Border
Key facts about Asian Americans, a diverse and growing population
Defining generations: Where Millennials end and Generation Z begins