The opportunities provided by large social networks are obvious. There are more people to socialize with and to provide social capital. There is the possibility for more diversity in larger networks, and that expands the kinds of experiences people share within a network and the kinds of resources they contribute.

Yet large networks can also be a burden. It takes time and energy to maintain a large network, especially when it comprises not a single solidary group but a fragmented group with many discrete clusters and relationships. More ties can also mean more requests for social capital. Increased opportunity for socializing may bring the burden of too-frequent conviviality.

How does people’s email use correlate with the size of their social networks? On the one hand, email allows for flexible interaction because it is asynchronous — messages sit there until they are read — and provides the user more control over the length of time invested in each interaction than either in-person or phone contact. But the accessibility of email may also be burdensome. People are more willing to contact each other by email than by knocking on doors or making telephone calls. It scarcely costs them any more time to send an email message to many people than to just one. Hence, email can support the growth of communication, especially as it adds on to — rather than replaces — in-person and even phone contact.

Email is resilient to the demands of larger social networks.

It is a different story for email: People contact the same percentage of core and significant ties at least once per week regardless of whether their networks are large, medium, or small. This means that a greater number of social ties are contacted by email in large networks. For example, two people contact 50% of their network ties, but Person A contacts only 5 people in his small network of 10 people whereas Person B contacts 15 people in her large network of 30 people.

People use email to contact about the same percentage of those in their social networks, regardless of whether they are small or large. 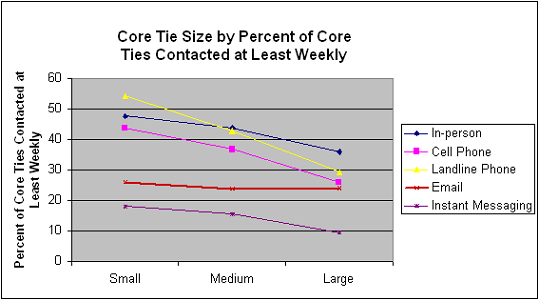 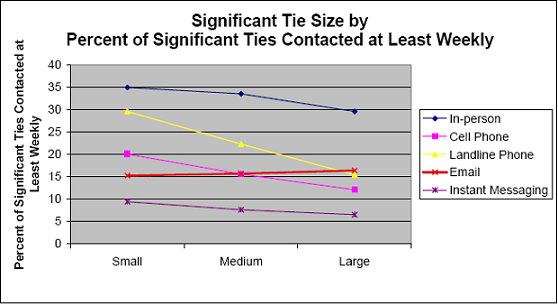 Email may be more resilient to the effects of network size because it allows for more flexible interaction.

Why is email more resilient to the effects of network size than other forms of contact? A number of characteristics set email apart.

Email is most important for those with large numbers of significant ties.

Email is the fourth most widespread means of contacting core ties weekly after landline phone (43%), in-person encounters (43%), and cell phones (36%). By contrast, 25% of core ties are contacted weekly by email and 15% by IM.

In general, email is more important for large numbers of significant ties than core ties. Core ties entail more of the rich and in-depth contact that tends to takes place in real time through in-person and phone contact. This means that even those with large core tie networks need to contact these ties in person or by telephone.

Email fills a communication void — not by substituting for more in-depth contact, but by augmenting otherwise rarer contact.

By contrast, significant ties may find email suitable for contact, even though it does not convey as much sensory information as in-person or phone contact. It is not that email takes the place of richer contact, but that it augments otherwise rarer contact. It fills a communication void. Moreover, email is efficient for juggling large numbers of significant ties because it can be sent and received at convenient times without worrying about the availability of the other party.

Email is used in particular to keep in contact with geographically distant ties, both core and significant.

From the beginning, there was excitement about the internet because people could use email to contact friends and relatives who do not live near each other. To obtain some information about this, the Social Ties survey asked people about the number of their ties that live more than one hour’s travel from them.

Yet, while email is especially useful for contacting distant friends and relatives, it is used extensively to contact those who live nearby — even neighbors. This is consistent with the intensive study of an exurban Toronto neighborhood done by Keith Hampton and Barry Wellman (2002), which showed that email is a convenient way to contact people near as well as far. 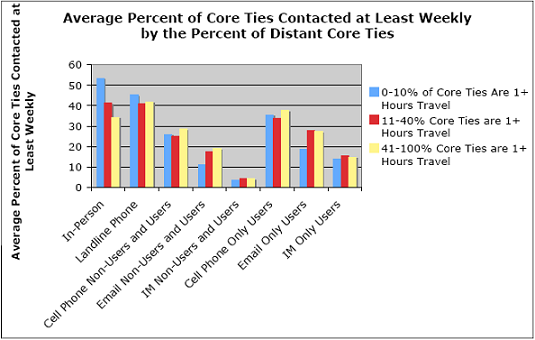 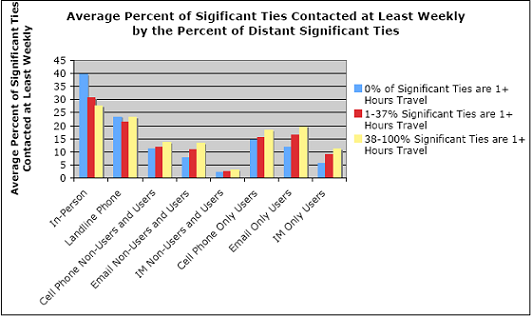 on the size of networks, while taking into account other factors such as education, age, and phone use, which might also have independent effects on the size of networks.17 The regressions show that the number of network members contacted weekly by email is associated with the number of significant ties in a network as well as the number of total ties (core + significant). The positive coefficient of email with the number of core ties also shows that the more people contacted weekly by email, the larger the social network. By contrast, the negative coefficients for the use of landline and cell phones show that phone use is related to smaller networks when other factors are taken into account. Surprisingly, there is a higher percentage of weekly in-person contact for larger numbers of significant ties, presumably because many are neighbors or workmates.

The regressions also support what the demographic analysis in the Methodology section describes: Being married, college-educated, employed and living in rural areas can affect the number of core and significant ties. Being married has the strongest impact, as marriage connects spouses to an additional set of kin. 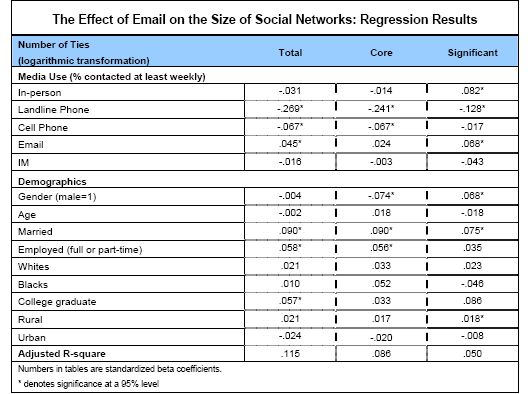 Next: Testing the Replacement Hypothesis
← Prev Page
Page1Page2Page3Page4Page5You are reading page6Page7Page8
Next Page →

The Strength of Internet Ties Acknowledgments What Is the Internet Doing to Relationships? Social Networks in America Keeping in Contact with Core and Significant Ties
Email and Network Size
Large social networks provide opportunities and burdens.Email is resilient to the demands of larger social networks.Email may be more resilient to the effects of network size because it allows for more flexible interaction.Email is most important for those with large numbers of significant ties.Email is used in particular to keep in contact with geographically distant ties, both core and significant.Email use and in-person contact are associated with larger social networks and phone use is associated with smaller social networks.
Testing the Replacement Hypothesis Information Is a Conduit to Help