Does email substitute for or augment in-person and phone contact?

Since the internet became popular, analysts have wondered about the relationship between email and other means of social contact. Some studies test the replacement hypothesis by examining whether the frequency of email messages sent or received corresponds to decreases (or even increases) in the frequency of in-person or telephone contact.16 Other studies test this hypothesis by measuring time spent online and time spent on other social activities.17 Results from both types of studies have been consistent: The internet does not reduce in-person or telephone contact, or any other form of social activity; it replaces only sleeping or TV watching.

This study examines this issue in a different way. Instead of looking for associations between the frequency or duration of email contact and in-person (or phone) contact, this study looks for associations between the percentages of social ties contacted through various media. If the replacement hypothesis holds true, we would expect that high percentages of social ties contacted by email would be associated with low percentages of social ties contacted through other communication media. This survey has the further advantage of being able to test the replacement hypothesis for core ties and significant ties. For example, Caroline Haythornthwaite and Barry Wellman (1998) found that core ties rely on multiple modes of contact, while significant ties rely on only one or two. By separating core ties from significant ties, we can take into account the strength of the tie when assessing the kinds of communication media used.

Email does not replace other forms of contact for core ties.

The replacement hypothesis also is not supported for in-person contact with core ties: People see about the same number of core ties regardless of whether they email a few or many core ties (Figure 8). The percent of weekly in-person contact does not decrease as the percent of weekly email contact increases. For example, the percentage of core ties seen in-person at least weekly is the same, 41%, for both those who do not use email and for those who email 80%-100% of their core ties at least weekly. These findings are consistent with a 2002 study by Anabel Quan-Haase and Barry Wellman that uses a larger, but less representative, sample.

There is “media multiplexity”: the more contact by one communication medium, the more by others.

It could be that one thing leads to another, so that email leads to in-person contact (“let’s get together”) or phone contact (“this is too complicated for email; phone me!”). Similarly, phone conversations can lead to more email (“I’ll send you that joke or web address as soon as I get online”) as can in-person encounters (“It was fun meeting you; let’s keep in touch by email.”). It could be that some social networks are more gregarious than others, so that there is a greater norm and practice of sociability. Or, it could be that some people are more gregariously active in maintaining their networks through frequent communication.

Whatever the cause, it is clear that email is adding on to other communication media. This means that the current generation of email users is communicating much more often than recent generations and possibly more often than any previous generation since people huddled in caves with only conversation to pass the nights away. Couple this high rate of communication with the sizable networks we have found, and we have suggestive evidence that while Americans may be bowling alone — as Robert Putnam warned — they are networking together. 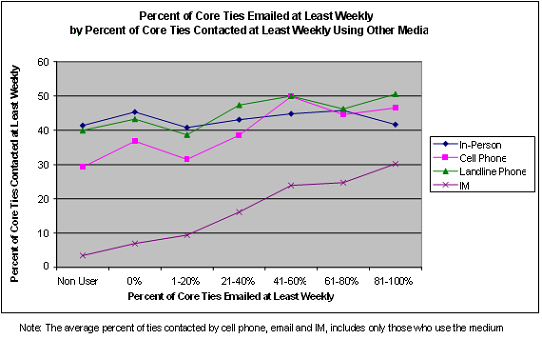 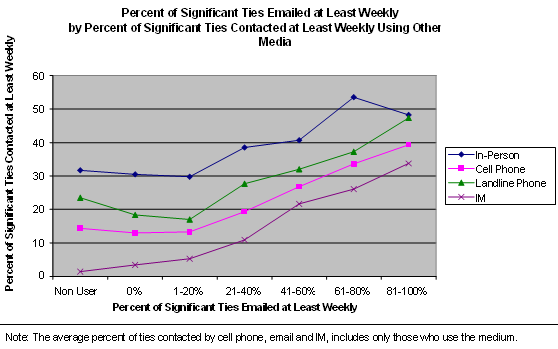 Next: Information Is a Conduit to Help
← Prev Page
Page1Page2Page3Page4Page5Page6You are reading page7Page8
Next Page →