There has been an explosion in the modes and reach of remote communication.

When Wellman conducted his early studies of social ties in 1968 and 1979,10 the results were relatively straightforward. Americans either telephoned (using traditional “landline” phones, of course)11 or saw each other in person — traveling by foot, car, mass transit, or airplane. Although the travel options have remained largely the same (except that airplane travel has become much cheaper and more routine), communication options have proliferated. Since the mid-1980s, cell phones have joined landline phones — so much so that some people no longer even have a landline telephone at home. During the 1990s, large proportions of the world’s population have joined the relatively small number of scholars and researchers who were the original internet users. The tools for electronic communication have expanded beyond the original email and Usenet messages to include instant messaging, group messaging on email lists, conversing in chat rooms, posting blogs, internet telephoning, and webcams.

Not only have the means of communication proliferated, but the reach of communication has increased. It is as cheap to email someone across the ocean as it is to email them across the street. With transoceanic visits still relatively expensive and rare, and with transoceanic phone calls entailing careful time-zone juggling, the asynchronous (store-and-retrieve) nature of email makes communication across time zones much more achievable. While phone calls remain largely between two persons (or at most, between two households on extension phones), email and IM make it easy for many people to communicate at once.

Despite the increased options, people still communicate largely by traditional means — in person and by landline phone lines.

The Social Ties survey sheds new light on the extent to which the new communication media aid in the maintenance of social ties among friends, relatives, workmates, and acquaintances. The survey shows that even with the flourishing of the internet, people still most commonly communicate with their social ties in traditional ways — in person and by landline phone. However, many also use email, cell phone, and IM for social communications.

People communicate weekly with a
greater percentage of their core ties than
their significant ties.

Cell phones and IM are used mostly
to communicate with core ties.

These are the percentages for all of the Americans surveyed. Yet, not all Americans have cell phones or internet access: only 74% of the people we surveyed are cell phone users, and even smaller percentages are email users (63%) and IM users (27%). However, even those who have cell phones and use the internet are more apt to contact core and significant ties in person or by landline phone than by cell phone, email, or IM.

It is clear that Americans use landline phones more than cell phones, and they are more likely to use cell phones for contacting core ties than for contacting significant ties. Cell phone use may play a greater role in connecting core ties because it is a personal communication medium that can be intrusive by ringing anywhere and anytime. People may not have the cell phone numbers of significant ties and, if they do, they may be more hesitant to call at potentially inopportune moments. Moreover, cell phones aid in the “on-the-fly” decision-making that often happens with close friends and family in daily life, such as deciding what groceries to buy or arranging to pick up a child from soccer practice. This may be a worldwide phenomenon, as heavy use of cell phones to contact core ties has also been found in Japan and Europe.13

Even for those with internet access, email is used less often than in-person encounters or telephoning for connecting with core ties. However, email is used equally as often as cell phones for connecting with significant ties. Although IM is rarely used by most adult Americans for contacting their core and significant ties, when it is used, it is used in particular to contact core ties.

By contrast, IM is used much less widely. As for phones, IM is more a medium for contacting core ties (14%) than significant ties (8%). Yet recent studies by the Pew Internet & American Life Project show that IM is widely used among teens.14 There is reason to wonder. Adult work life produces fragmented and focused demands that often can better be handled by email than IM. Further, there is a strong possibility that “texting,” exchanging messages by cell phone, will continue to grow and become as important as IM in America, just as it has in Europe and Asia.

What do these percentages mean? 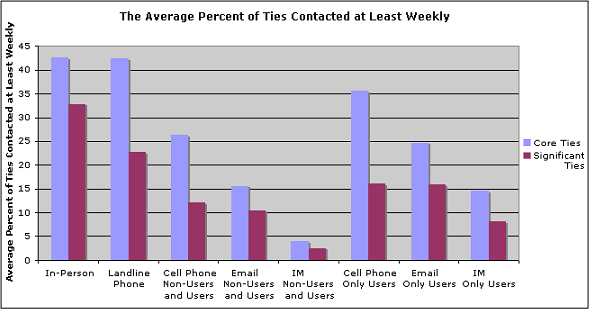 Next: Email and Network Size
← Prev Page
Page1Page2Page3Page4You are reading page5Page6Page7Page8
Next Page →

The Strength of Internet Ties Acknowledgments What Is the Internet Doing to Relationships? Social Networks in America
Keeping in Contact with Core and Significant Ties
There has been an explosion in the modes and reach of remote communication.Despite the increased options, people still communicate largely by traditional means — in person and by landline phone lines.What do these percentages mean?
Email and Network Size Testing the Replacement Hypothesis Information Is a Conduit to Help