Some evidence about relationships has been alarming.

Yet evidence from the Social Ties survey show that the situation is not so dire. For one thing, we did not ask about picnics; we asked directly about social relations. This leads to a focus on social networks, whomever they include and wherever they are located. For example, friends and relatives are now spatially dispersed rather than concentrated in neighborhoods. The difficulty of traveling to get together may explain why picnics have declined as a way for friends and relatives to meet. Yet other ways of interacting have flourished, on- and offline.

By probing these two types of relationships, the Social Ties survey provides novel information about the social networks of a sizable proportion of Americans. This information helps us develop a snapshot of what these networks look like.

Social networks are flourishing in America.

Despite concerns that Americans are living lonely and isolated lives, results from the Social Ties survey show that Americans maintain a sizable number of relationships with people who are more than just acquaintances. These relationships include both very close core ties and somewhat close significant ties.

There are important statistical considerations when examining these survey results.

The differences between the median and mean values indicate that a sizable number of Americans report having large networks. For statistical reasons, these “outliers” have a disproportionate influence on the analysis that follows. To deal with this issue, we divide core and significant ties into thirds: small, medium, and large.

The Pew Social Ties survey also shows much different numbers of core ties than the much smaller mean of 2.1 core ties found by McPherson, Smith-Lovin, and Brashears in the U.S. General Social Survey of 2004, which itself was a reduction from the 2.9 found by Marsden in the 1985 General Social Survey.8 The reason is that these other studies used only one criterion for identifying core ties: confidants with whom important matters are discussed.

Yet, there is more to being “very close” to a person than being a confidant discussing important matters. Having frequent intimate contact — whether in person or online — and providing help to each other clearly play roles. Hence, we used “people you are very close to” as the key question and prompted survey respondents to tell us about people very close to them, those with whom they are in frequent contact or from whom they get substantial help, as well as those with whom they discuss important matters. The discrepancy is also due to the fact that we asked only about close ties outside of the home, while the other surveys allowed people to include people inside the home, such as spouses.

The substantial numbers of core and significant ties show that most Americans are not isolated. But are these results accurate, given that they are estimates given during phone interviews? We are reassured that two earlier North American studies showed similar results — Claude Fischer’s study in northern California that took place in the late 1970s, and Wellman and Wortley’s research in southern Ontario that took place about a decade later. Moreover, similar numbers show up in three recent studies in France, Germany, and Iran.9

Survey respondents told us the number of their ties that are immediate family — parents, adult children, brothers and sisters, and the corresponding in-laws — as well as about other family members, workmates, neighbors, and friends. These numbers were then added together to give the total number core ties and significant ties for each respondent. 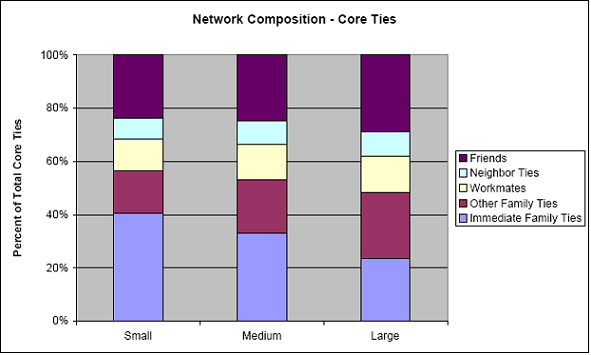 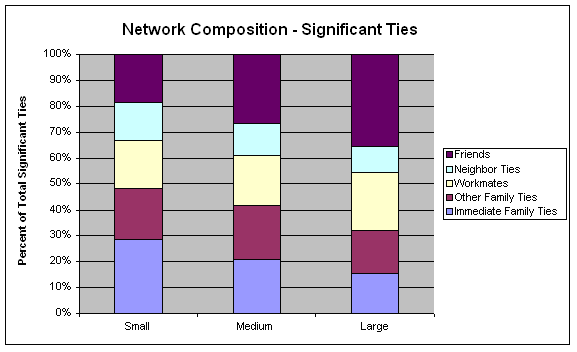 There are few significant demographic differences among those with different size networks.

Next: Keeping in Contact with Core and Significant Ties
← Prev Page
Page1Page2Page3You are reading page4Page5Page6Page7Page8
Next Page →

The Strength of Internet Ties Acknowledgments What Is the Internet Doing to Relationships?
Social Networks in America
Some evidence about relationships has been alarming.Social networks are flourishing in America.There are important statistical considerations when examining these survey results.Larger social networks include proportionally more friends than immediate family.Internet users have more significant ties than non-users.There are few significant demographic differences among those with different size networks.
Keeping in Contact with Core and Significant Ties Email and Network Size Testing the Replacement Hypothesis Information Is a Conduit to Help