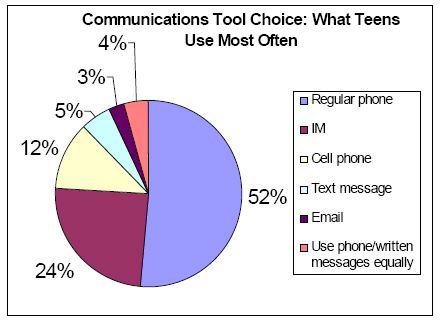 Asked in general how they most often communicate with their friends over voice or text, teens report that they use the phone. Close to two-thirds (63%) report calling friends on the phone to talk with them most often, while about one-third (32%) said they most often write messages to their friends. A very small percentage (4%) say they do both equally.

Even though statistics regarding teens overall use of email and IM have remained stable over the past four years, when asked what they choose to use most often, the telephone still trumps all forms of written communication. With in the written choices, instant messaging consistently beats email, as well as text messaging, as the method of choice for talking with friends.

About 45% of American teens have cell phones. Within this group, teens are slightly more likely to report spending more time talking with friends on landline phones than cell phones. More than half (53%) of cell-phone-owning teens say they spend more time on a landline, compared to 45% of the same group who say they mostly use a cell phone.

Even though the phone is used most often for a variety of conversations, there are some instances where a significant number of teens report that instant messaging, email, or face-to-face conversations would be their preferred mode of communication. 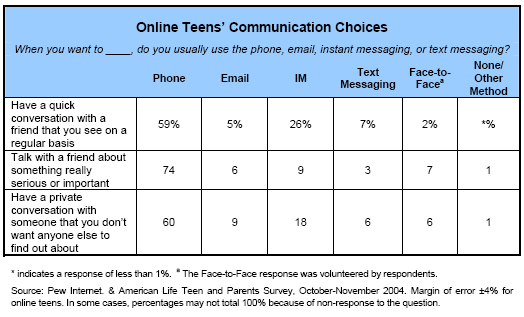 When conversing with friends through the written word, teens prefer instant messaging to almost any other mode of textual communication. Fully 46% of teens say they use IM most often when using written communications to talk to friends. Another third (33%) say they use email to send notes or letters to friends when sending written messages. Fifteen percent of teens say they most often text message (or SMS) with their friends. The remainder said they communicated by the written word some other way, or refused to answer the question.

The mode of communication that a teen chooses also varies according to the nature of the message. Online teens generally prefer the phone (landline or cell phone) to other communications choices, regardless of the type of conversation they are having. When talking about something really serious or important with a friend, almost three-quarters of online teens (74%) say that they typically use the phone. Just 9% say they usually choose instant messaging for discussing weighty matters. Another 6% will turn to email, and 3% rely on text messaging.

Online teens who want to have a private conversation with someone are more likely to turn to instant messaging on a regular basis (18%) than they are to email (9%) or text message (6%). Still, 60% usually use their landline phone or cell phone to engage in conversations they don’t want anyone else to know about.

While telephone conversations have the risk of being overheard, email and IM conversations can be easily saved and shared. As noted previously, 21% of online teens report that a private email, instant message or text message that they sent in confidence had been forwarded on to someone else.

Still, despite the general tendency to pick the phone for most conversations, teens did tell us that there were times when they preferred IM to a phone call. A male high school student in one of our focus groups explained that IM is better than the phone because it “allows you talk to more than one person at once, which can be useful in certain cases.”

Yet, instant messaging and text messaging aren’t simply used for conversations with other tech-savvy peers. Almost one in three (29%) teens report that they IM or text message with their parents.

When asked how they decided how to communicate with others, teens reported that a number of factors came into play. How quickly you need to talk to someone, how far away they were, and what kind of technology they had access to were all a part of the quick mental calculus. Said one teen:

“Well, obviously it’s based on how urgently you need to speak to the person. Like, if you’re asking your parents to extend your curfew, you’re not going to send them a letter. You’d probably prefer a phone call.”

Other teens discussed IMing a sister away at college rather than calling her and saving the long distance telephone charges. One teen discussed the limitations of IM as a communications choice:

“The problem with instant messaging is you have to be connected and into the network and so do they, as opposed to an email which you can send to them and they can pick it up at their own convenience and read it…. It also depends on how much information you’re transmitting, I guess. If you’re sending a lot of information, you’d almost use just regular mail or email, but you wouldn’t read a letter to someone over the phone.”

The acquisition of a cell phone appears to influence the communication choices of teens. In particular, cell phone users are much less likely to choose to use email than teens without cell phones. When asked which medium teens used to send written messages to friends most often, teens with cell phones were much more likely to select instant messaging and text messaging than email, while teens without mobile phones were more likely to choose email or instant messaging as their most favored textual method of communicating with friends.

As discussed previously, 45% of all teens have a cell phone, and 47% of teen internet users own one. Of teens with mobile phones, 51% said they most often conversed by text through instant messaging, 25% said they most often text messaged on their phones, and 22% picked email as their most frequent mode of written communication.

Teens with a web-enabled cell phone who report using it to go online (about 10% of teens online) are even more likely to report using text messaging most often for written communication. More than a third of these teens (36%) report using cell-phone-based texts, 45% select instant messaging and a mere 19% say that email is the way they most often write to friends.

For many teens, a driver’s license is a potent symbol of independence and mobility. More than a third (37%) of teens aged 15 and older have a driver’s license. But when it comes to technology use, the driver’s license does not have a particularly large impact. One place it does make a difference is in cell phone ownership. Of those aged 15-17, 75% of drivers have cellular phones, as compared to only 47% of non-drivers in that age group.