Beyond understanding the conditions of internet access inside the home, it is important to understand how the internet and other communication technologies fit into teens’ external environments and increasingly complex lives. For most teenagers, technology plays a crucial role in their everyday lives, and the internet is the backbone of their overall media milieu. For our investigation of teenagers, we wanted to discover the content and context of their technological surroundings and how it relates to their daily offline experience.

The vast majority of teenagers own some type of media device.

As part of our survey, we asked teens whether or not they had any of four types of devices that can be connected to the internet: desktop computers, laptop computers, cell phones, and personal digital devices such as Sidekicks or Blackberries. An overwhelming majority of all teenagers, 84%, report they had at least one of these four types of devices. Forty-four percent say they have two or more of these devices while 12% have three and 2% report having all four. Only 16% of all teens report that they do not have any of these devices at all. 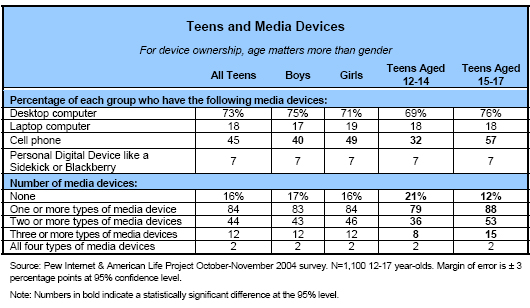 Close to half of all teens have a cell phone.

Cell phones are also a widely-used communication device for teenagers. Close to half of the teenagers we surveyed, 45%, say they have a cell phone. This percentage is less than the 68% of adults who have one,12 but it still represents a significant proportion of teens. Of the roughly 11 million teenagers with a cell phone, only 10% use it to connect to the internet.

For many teens with a cell phone, the use of that phone is a central method of communication in daily life. Forty-five percent of teens with cell phones say they spend more time talking with their friends on their cell phone than on a regular landline phone. Nevertheless, slightly more of these cell phone owning teens (53%) report using a landline phone more than their cell.

Cell phones also change the behaviors and expectations of family and friends. One member of a high school focus group described how her cell phone altered her interactions with her mother.

“… before I got the phone, it was kind of like, ‘I’m going to be here, for this length of time before I leave,’ and now I can go out because …I don’t have to say I’m leaving, I can go. If she’s not around, I can just go, and she’ll get home and see [that I’m not there] and just call. So it’s a lot easier.”

Other teens feel like the phone was given to them by parents to make them less independent and more in touch with their families. But as one female teen points out:

“When I’m out and my parents are trying to get a hold of me, they can call but that also doesn’t mean that I’m going to pick it up when it’s them…. I do! I swear I do. But if I didn’t want to then I wouldn’t have to.”

Teens say they are enveloped in a wired world.

This familiarity holds true across most cross-sections of teens. About the same number of girls and boys answer that most of the people they know use the internet while 86% of teenagers aged 15-17 and 80% of teenagers aged 12-14 also answer the same way. White teenagers are somewhat more likely to answer “most” people than African-Americans or Hispanics, although significant majorities of all races say that most people they know are on the internet. Eighty-seven percent of white teenagers, 70% of Hispanic teenagers, and 69% of African-American teenagers respond that way. Eighteen percent of African-American teenagers responded to the question by saying that very few or none of the people they knew were using the web compared to 10% of Hispanic teens and only 4% of white teens.

While the majority of teenagers answer that most of the people they know use the internet, there are differences in the numbers of teens who agree depending on their internet access or the access of their parents. For teens who go online themselves, 88% say most of the people they know go online compared to only 51% of teens who are not online themselves. For teenagers with parents who go online, 86% answer “most” compared to 69% of teens whose parents are not users of the internet.

Even though there is a discrepancy between teenagers’ perceptions of the people around them depending on their parent’s online status, almost seven in ten teens whose parents are not online still assert that most of the people they know are online (n=185). This suggests that their perception of how wired the world is around them may be influenced by other teens and adults outside of their own home.

Also as part of our survey, we wanted to find out about the types of offline recreational activities teenagers participated in to better understand the organization and complexity of teens’ daily lives. We asked all teens if they participate in any of four types of group activities. These activities included a school club like a drama or language club, a school sports program, an extracurricular activity like a band, or a club or sports program that is not affiliated with a school such as a church youth group, recreation league, or volunteer organization.

Of all teenagers, 83% say that they belong to at least one of these groups while only 17% claim that they are not involved in any of these activities. More girls (87%) participate in any one of these activities than boys (79%). Overall, 34% of teenagers say they are involved with a school club, 48% with a school sports program, 41% with an extracurricular activity, and 54% belong to a club or sports program not affiliated with their school.

Most teens say they maintain robust networks of friends.

Parents don’t see the internet as a boon to the quality of teens’ social lives.

Advances in technology and personal growth change teens’ internet use over time.

Many of our teenage focus group participants noted that the nature of their internet use has changed as they have become older and their interests have shifted. At the same time, the availability of new internet-enabled technologies and faster access speeds has altered the types of activities teens will carry out online:

“I definitely think it’s about both age and technology. Because I know when I first started, you know, using the internet seriously, it was all you could do was like, research and games because there wasn’t an instant messaging type of service set up.”
– High School Female

Similarly, many teens who participated in our focus groups have experienced the broadband difference firsthand. In their younger years, dial-up connections were more prevalent, and as they got older and their online activities became more complex, they came to rely on the ease of high-speed access. One respondent noted the following changes in her online habits:

“I know I rely a lot more on the internet for everyday stuff — looking up things that you know, I would have to call a couple of people to find out, or [having the ability to do] better research, or instant messaging. I know I rely on the internet a lot more as I’ve gotten older. All my college applications were online and that was so much better.”
– High School Female

Another focus group participant describes the changes in her internet use over time:

“I use it more on a daily basis than I did when I was younger. I would get online maybe in the evenings or something, if I had nothing else to do. But now, it’s kind of like you get home, sign-on, turn your music on.”
– High School Female