According to the latest Pew Internet & American Life Project telephone survey fielded in October and November 2004, 87% of American youth aged 12 to 17 go online.4 That represents roughly 21 million teens who use the internet in some aspect of their lives. The online teen population has increased by roughly 24% since we last asked this question in a survey in December 2000.5 On the flip side, 13% of American teenagers do not use the Internet. About half (47%) of teens who say they do not go online have been online before but have since dropped off. 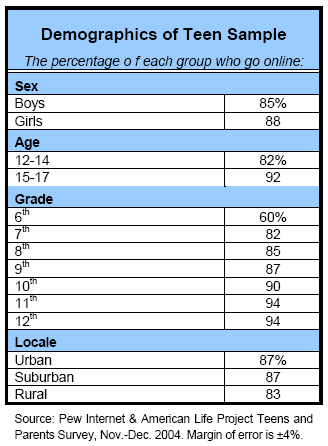 Parents of teens are also much more likely to go online than the average American adult. Some 80% of parents who have teenagers go online, compared to 66% of all American adults. Parents with teenagers who use the internet have even higher levels of connectivity, with 84% of them reporting internet use.

African-Americans are the least likely to be online. 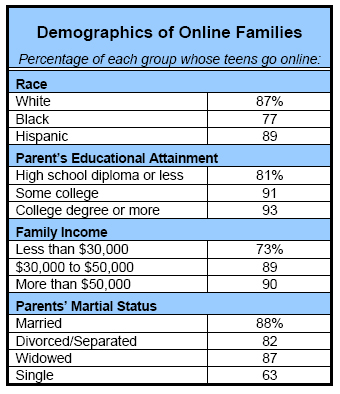 Most teens have logged on by the 7th grade.

Starting Junior High seems to be the moment when most teens who were not previously online get connected. About 60% of the 6th graders in our sample reported using the Internet. By 7th grade, this number jumps to 82% of teens who are online. From there, the percentage of internet users in the teen population for each grade climbs steadily before topping out at 94% for all 11th and 12th graders. Much of the lag among 6th graders appears to come from boys. Less than half (44%) of 6th grade boys report going online, compared to 79% of 6th grade girls. 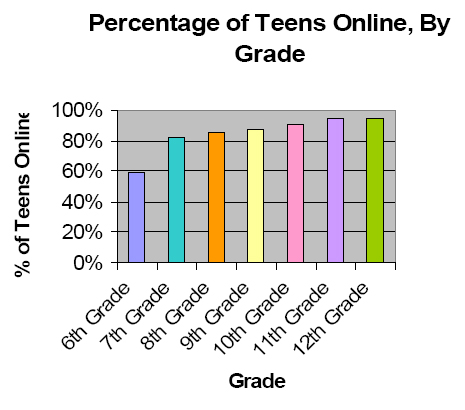 Older teens, aged 15-17, go online more frequently than younger teens. Some 59% of wired teens aged 15-17 go online once a day or more, while 43% of younger teens report going online that frequently. By comparison, 11% of 12- to 14-year-olds say they go online every few weeks, compared to just 6% of older teens.

Teens from the poorest families lag behind.

Next: Part 2: Conditions of Internet Use
← Prev Page
Page1Page2You are reading page3Page4Page5Page6Page7Page8Page9
Next Page →