In order to understand the nature of teens’ internet access, we asked: How often do they go online? Where do they usually go online? Do they access the internet from more than one place? What speed is their access? What does home access look like for today’s American teen? In the sections that follow, we lay out the context of teens’ internet access and use, to gain a better understanding of factors that may influence how a teen uses the internet and to more fully understand the online and offline behaviors of teens as a whole.

Half of teens use the internet every day.

More than half (51%) of those approximately 21 million teens who use the internet say they go online at least daily. Some 24% of online teens report going online several times a day, and 27% report going online once a day. This 51% reflects an increase from when we asked this question previously as a part of our December 2000 survey,11 when 42% of teens reported daily internet use.

About a third (35%) of online teen users say they go online weekly, with 21% reporting 3-5 days a week of internet use and 13% 1-2 days of internet use per week. These figures reflect a drop from our 2000 survey, when 45%, the largest percentage of online teens reported going online on a weekly basis.

Teens log on most often from home, but library use grows more than any other location.

More than half (54%) of all online teens say they have gone online from a library, up from a little more than a third of teens (36%) who reported utilizing library internet resources in 2000. Nine percent of teens say they access the internet from a community center, like a Boys’ or Girls’ club, or a religiously affiliated youth center. 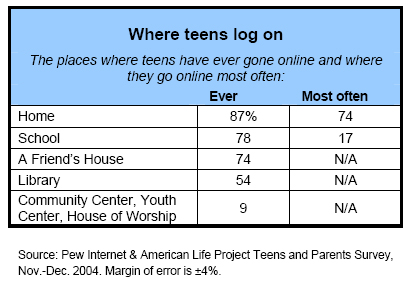 The home internet environment is dominated by the desktop.

Desktop computers are the front door to the online world for most teens. Seventy-three percent of all teenagers we surveyed report having a desktop computer — about the same percentage as adults (75%) who say they have a personal computer of any kind, including desktop or laptop, in their home.12 Three-quarters (75%) of online teens who go online from home have logged on from a desktop. However, teens are by no means tied exclusively to their desktops. Eighty-four percent of those with a desktop computer will also use an alternate device to go online.

Half of online teens have a broadband connection at home.

There is also a gap by race in the number of teens who go online and in the types of internet connections they are using from home. White teenagers are more likely to be online than African-American teenagers, and whites are online at about the same rate as English-speaking Hispanic teenagers. White teens are also more likely to have a high-speed connection from home. One-half of white teenagers who go online from home have a high-speed connection compared to 39% of African-American teenagers and 42% of Hispanic teenagers.

As discussed in other Pew Internet Project reports,14 broadband internet connectivity changes how individuals use the Internet, and teens are no exception. As a part of this research study, we conducted four focus groups with high school and middle schoolers, two at a university in a large city in the Midwest and two at a small college in a small town at the exurban edge of a large Southern city. When asked specifically about how broadband has impacted their online behavior, several teens noted that they download files more often and aren’t as “picky” about what they download. These teens have grown up in a world that is overflowing with information and entertainment, and they have come to expect that most content can be found online for free. One male participant told us: “You can download anything you want. [When buying a game offline] I’ll pay $50, but on here, I can get it for free.”

Three out of four teens go online from “public” areas in their home.

Project findings on computer location, sharing and online filters suggest that the majority of teens who use the internet at home have a relatively public and monitored level of access.15 While 67% of parents of online teens believe that the internet is a good thing for their child, there is also great concern among parents about the safety of the internet. For example, more than four out of five parents believe that most teens are not careful enough about the information they give out about themselves online, and many parents are using a variety of methods to protect their children from potential dangers including using filters and placing their computer in a public space.

In an attempt to address some of those concerns, many families have tried a variety of strategies. For instance, almost three-quarters of teenagers who go online from home do so from a computer that is located in an open family area such as a living room or den. Placing a computer in a public space in the home allows other family members to casually and easily observe each others’ internet use and better monitor or regulate the online habits of the household. About one-quarter say that the computer that connects them to the web is in a private area such as a bedroom. This proportion is practically identical to our December 2000 survey, which showed that 70% of online teenagers said their internet-connected computer was in an open family area compared to 27% who said their computer was in a private space. 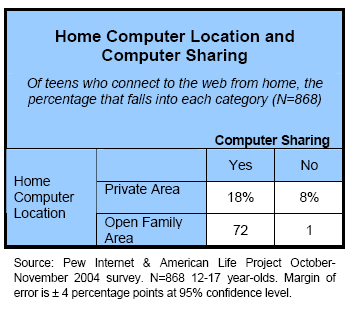 The percentages of online teenagers with an internet-connected computer in a public location within the house do not vary much by age or sex of the teen.

The percentage of online teenagers who report that other members of their family use the same internet-connected computer is relatively unchanged from when we asked an identical question in December 2000. In our current survey, 90% of teenagers who go online say that other family members also use the connected computer compared to only 10% who said they were the only person to use the computer.

More than half of parents with online teens use filters and most restrict use in some way.

Many parents use various methods of filtering and monitoring to keep an eye on their teens online.16 Fifty-four percent of parents use internet filters, up from 41% in December 2000. At the same time, 62% of parents of online teens report that they check up on their child’s web surfing habits and 64% say they set rules for their child’s time online. However, even with all of those monitoring methods, 65% of all parents and 64% of all teens say they think that teens do things online they would not want their parents to know about.