The number of Americans using the Internet to find out about government services has grown substantially since the Pew Internet Project first inquired about this in March 2000.  Then, 47% of Internet users had sought information from state, local, or federal government Web sites; that translated into about 40 million Americans.  By the summer of 2002, 62% of Internet users had done this.  With the growth in the Internet population during that time, this means 71 million Americans had gone online to find government information by mid-2002.  The breadth of things surfers seek at government Web sites is striking; people look for tourist information, they download government forms, they check to see what services are available, and they look for potential opportunities to do business with government or handle their transactions like applying for benefits or renewing car registrations.

Success is apparently breeding the high expectations among Americans about the Web as a source of government information.  About three quarters (71%) of Internet users say that they “always” or “most of the time” find what they are looking for when they go to a federal, state, or local Web site.  One in five (20%) say they always find what they need at government Web sites. 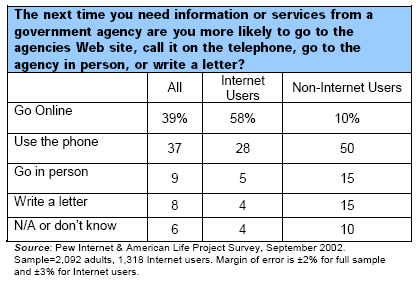 Next: Part 4: The Internet is the first choice for many health information seekers
← Prev Page
Page1Page2Page3Page4You are reading page5Page6Page7Page8Page9Page10
Next Page →