We have found that three variables are strongly associated with differences among those who use government agency Web sites: frequency of use, trust in government, and length of time online.

Some of our previous reports on other subjects have shown that those who frequently visit specific types of Web sites tend to rely on those sites more than occasional visitors do. Frequent visitors also have the greatest levels of satisfaction with the results that they find. We found the same associations among government Web site users: Those who visited government Web sites once a week or more often looked for more kinds of information than less frequent users and frequent users reported higher levels of satisfaction than those who were less frequent visitors. Many said they were interacting better with their governments because of the information they found on the Web. 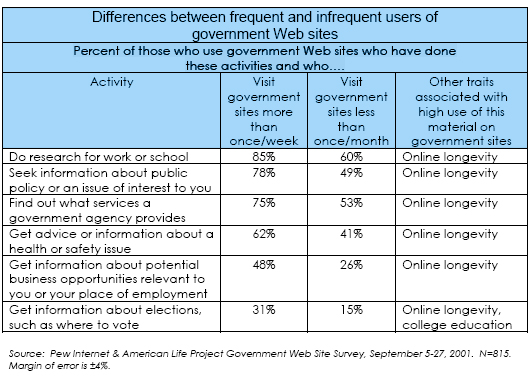 Work demands appear to be the main characteristic distinguishing frequent government site users from others.  There are more men in this group (56%) than women. And they are often veteran Internet users. Other than that, there are few differences that can be attributed to standard demographics.  Frequent users of government sites are no more likely than others to have a college education, or to belong to a specific racial or ethnic group.

Our previous studies have shown that online experience leads to better searching and better navigating of Web sites. In the case of government site users, the population is split roughly half and half between those who have four years or fewer of online experience, and those who have five years or more. We found that five-year Internet veterans visited more types of government Web sites, looked for more types of information, and engaged in more actual transactions while at the sites than non-veterans. 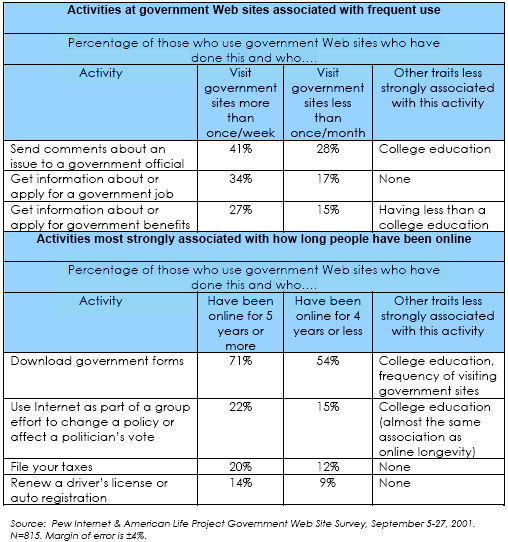 Next: Part 4: A case study of the last visit to government Web sites
← Prev Page
Page1Page2Page3You are reading page4Page5Page6
Next Page →