The rise of e-government has been one of the most striking developments on the Web. In just a few years, thousands of government agencies, legislators, and courts have established a Net presence. Today, all three branches of the federal government are online, and the portal FirstGov.gov claims to link to 47 million pages.6 In addition, all 50 states have government Web sites.  Local governments are catching up.  There are few places where any government official feels justified in not putting government information and services online. 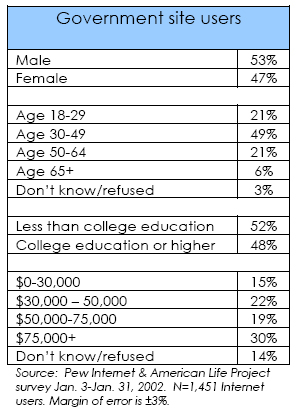 Where government site users go; how often they visit 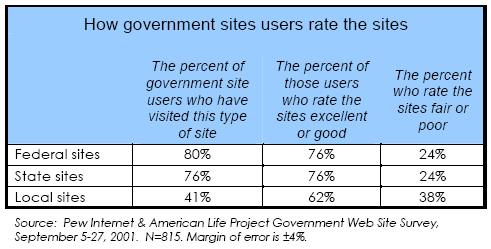 Men are more likely than women to say federal sites are the sites they frequent most often.  Federal Web sites are particularly popular among those who have at least some college education (over 80% compared to 69% of high school graduates).  In contrast, women are more likely than men to cite state and local sites as their favorite.  State government Web sites are equally popular among those with and without college educations.

The information they seek

The most popular activities at government Web sites relate to the search for information. Understandably, people flock to the Internet to track down material that might otherwise take hours to obtain by phone or through personal visits to government agency offices.

Internet users research a variety of items on government Web sites, including material about what agencies do, the facts that are contained in government databases and documents, information related to civic issues, and insights into the business climate or opportunities in various communities.

The top three types of information sought address recreation, work, and personal concerns. Tourism and recreation goals top the list, with 77% of government site users seeking it out.  This is perhaps due in part to the home page promotions that many states and localities employ. For instance, the Maine Web site allows visitors to reserve campsites online.8  Vacation planning is followed by doing research for work or school (70%) and searching or information about the services offered by particular agencies (63%). 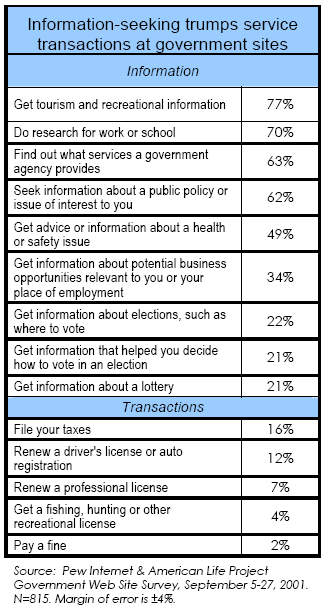 There are no strong demographic differences among those who use government sites for those top activities. Women are somewhat more likely than men to do work-related government surfing (73% to 66%). Those over the age of 65, surprisingly, are less likely than other age groups to use the Internet to learn about government benefits (34% compared to over 60% for all other age groups). But the most popular activities, on the whole, are equally popular among all groups.

Frequent surfers have the broadest experience of using information and features at government Web sites.  They have performed and average of seven of the tasks we asked about, compared to five or six for less frequent government site users.  Frequent surfing is also the strongest predictor of whether an individual has sought any of the given types of information.  Online longevity is also associated with each of these, though to a lesser extent.

There is concern among academics, activists, and even some elected officials that government Web sites might focus too much on providing services, and not enough on facilitating Americans’ civic involvement.  This service orientation, they argue, treats citizens as consumers rather than owners of government, and thus inhibits public engagement with the nation’s political life. 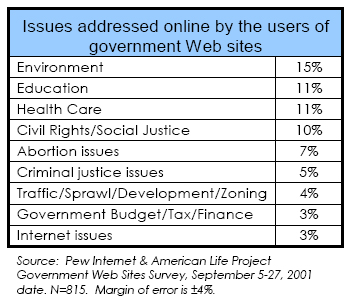 Our survey suggests that while government site users are certainly taking advantage of all the services and information made available on government sites, a portion are also very active in using the Internet to monitor public affairs.  Close to two-thirds of them (62%) have sought out information on public policy issues via government sites. About one in three (34%) has taken the extra step of contacting an official through a site and one in five (19%) has used the Internet as part of a concerted lobbying campaign. That activity translates into impressive numbers: It means 42 million Americans have used government Web sites to research public policy issues; 23 million Americans have used the Internet to send comments to public officials about policy choices; and 13 million have participated in online lobbying campaigns. Asked about the issues they had lobbied for, government site users cited environmental, educational, and health issues most often.  In addition, 21% of government site users have gathered information from such sites to help them decide how to vote in an election. That translates into more than 14 million people.

Are government Web site users more likely than other people to be politically engaged? We do not have enough data on the political activities of this group to draw direct comparisons with the rest of the population, but we can provide some perspective. According to the Pew Research Center for The People & The Press, 41% of American adults have ever contacted an elected official. Of course, anyone who has emailed an elected official is likely to have done so only in the past few years, and cannot be lumped together with people who may have written a letter 10 or 15 years ago. The same Pew Research Center survey found that 19% of adults have contacted an elected official within the past year. Looking at both numbers, it appears that government Web site users compare favorably with the general population for civic engagement.10

Some final observations about online activism: First, although it is often assumed that activism online is an activity for young Americans, our survey shows that those ages 18-29 are the least likely to have used the Internet in overtly political or activist ways. Second, there is no relationship between trust and using the Internet to research public issues or to contact officials. People who are wary of government are just as likely as those who trust it to use the Internet to try to influence the direction of policy or monitor issues.

The impact on citizen-government interactions

Internet veterans were more likely that those with less experience to express appreciation for the Internet’s role.  Assessment of the benefits of government sites was also affected by how frequently visitors used them, and how much trust they have in government.

How often they find what they want

Respondents say government agencies have a spotty record about making it easy to find the information the public wants. A majority of respondents believe that it is “fairly” or “very” easy to find information on federal sites (68%) or state sites (69%). However, only 46% say the same about local government.  As noted above, 80% of government visitors said they were able to accomplish what they wanted to at their last visit to a government Web site.  That is fairly similar to the record that other groups report about other kinds of online searches. For instance, it is close to the figure that is reported by those seeking health information and those seeking religious information online.

However, it also means that 20% of government site users were frustrated in their attempt to find information in their most recent searching episode. We do not know if those who were frustrated were simply faced with sites that lacked the content they needed11, or if they did not know how to navigate through the pages. If navigation was the main problem, we would expect that the most frequent surfers – those most familiar with government sites – would have higher success rates in finding what they want online. In fact, they are no more successful than less active surfers in this regard.

Education and trust in government were associated with successful searching.  College graduates said they found what they were looking for most of the time (63% v. 53% for non-college grads).

Next: Part 2: A closer look at some activities
← Prev Page
Page1You are reading page2Page3Page4Page5Page6
Next Page →