What they did and how they did it

In their most recent use of a government site, these Internet users were relatively likely to have begun their search at a major search engine or general site such as MSN or AOL (49%). About 29% started at a site they had used before; 9% started at a site they had heard about through a government publication; 7% began a site recommended by a friend or another source like a newspaper advertisement; and 3% went hunting through a portal that specializes in bringing together government material such as FirstGov.gov.

As home subscription services, the MSN and AOL homepages are starting points more for those starting from home (20%) than from work (8%).  Frequent government site users, not surprisingly, are more likely than the least active to start at a government site they have been to before (35%-22%).  Similarly, 41% of those who went online from work started with a specific government Web page they already knew, compared to 24% who went online from home.

Those who used general search queries when they began their hunt for government material tended to read the search list and pick the options that seemed to fit what they were trying to do or picked a site whose name they knew. Only 21% started with the first item on their search list and then checked other sites if that first hit didn’t work.

People visited government web sites for a variety of reasons.  The most commonly cited was simply “general research” (15%).  Some 8% were doing research for work, 7% were looking for jobs, and another 7% may have been planning vacations (as indicated by visits to tourism and parks information pages).  Some 6% sought information on Social Security or other government benefits. 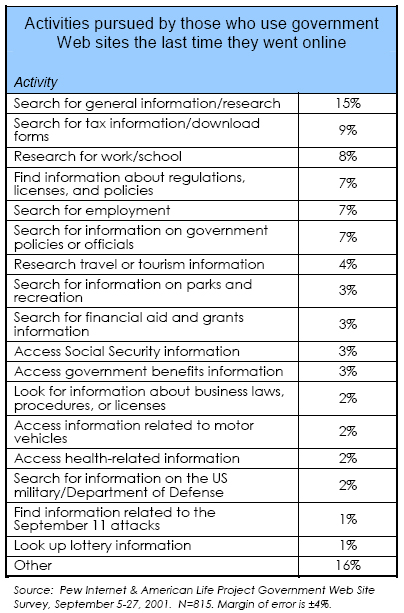 How easily they did it

The great majority of those who use government Web sites, about 80%, accomplished what they set out to do the last time they went online.  Neither the most frequent surfers nor the Internet veterans showed any advantages in this regard. Similarly, 80% of respondents were able to keep their searches of government sites limited to no more than three Web sites, regardless of whether they had logged on at home or work, or whether they were frequent or infrequent searchers.  Those who accessed from work may be just a little more efficient in their searches, being more able (32%) than those home surfers (21%) to keep their searches to 15 minutes or less.

How many sites they visited and how much time they spent

Many Internet users are just beginning to understand how much they can do on government Web sites – and many government agencies are regularly expanding the kinds of things that their constituents can do at the sites. Thus, it was not surprising to hear in this survey that a relatively large number of government site users (38%) were doing something new at a government site during their most recent visit to a government site. 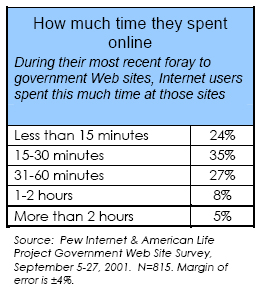 On September 11 and in the weeks after the terror attacks, Americans flocked to the Internet to reach loved ones and get news.  By all accounts, as they tried to make sense of what had happened, Americans supported the actions of their government.  Nonetheless, those looking for information about the crisis used the government Web space only modestly.

As with other browsing habits, people went to the Internet after the attacks to get information and to find out how to help.  Overwhelmingly, they sought information from well-established news sites.  About 7% of those who use government Web sites claim to visit government sites in response to the attacks, the U.S. military campaign against the Taliban, and the subsequent anthrax scares.11

There was not a great surge of citizen contact via the Internet with public officials. About 4% of Internet users contacted an elected official via email in response to the attacks. Similarly, 4% have used the Internet to get information about how to get involved politically.12