The rise of the e-citizen

Web presence is not optional for governments in the United States. Citizens are online and learning to demand answers at Internet speed.  Government budget-writers require that the cost-savings potential of the Internet be mastered.  At the same time, laws and executive orders mandate the provision of at least some services online.

And Americans are stepping up to use them.  Fully 68 million American adults have used government agency Web sites – a sharp increase from the 40 million who had used government sites in March 2000 when we first polled on the subject.  They exploit their new access to government in wide-ranging ways, finding information to further their civic, professional, and personal lives. Some also use government Web sites to apply for benefits, engage public officials, and complete transactions such as filing taxes.

While many government site users focus on their personal needs in dealing with government agencies, there is abundant evidence that a new “e-citizenship” is taking hold: 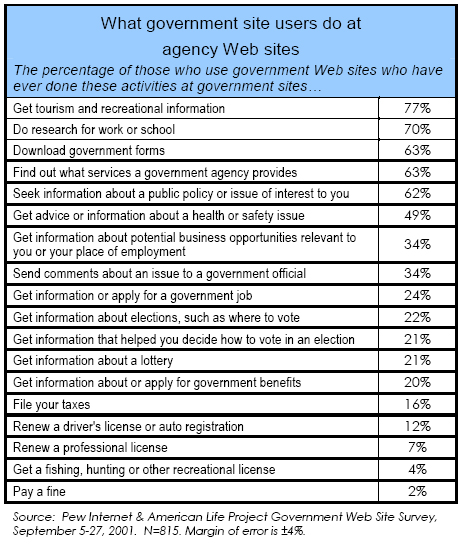 Next: Part 1: Who visits government Web sites and what they do
← Prev Page
You are reading page1Page2Page3Page4Page5Page6
Next Page →

The Rise of the E-Citizen
How Americans Get in Touch With Government
One year later: September 11 and the Internet
Use of E-Government Increases 50% as 97 Million Americans Use the Web and Email to Interact with Government Agencies
Search Engines