The Internet and what’s going on around town

Few people use the Internet to email public officials, with only 13% of Internet users saying they “often” or “sometimes” send an email to a public official in their community or state.  The low incidence of this kind of emailing may be due to ignorance of what is available on the Web about local government or some communities’ unwillingness to go online.  About half of all (52%) of all Internet users say that their town or local government has a Web site, and 3 out of 8 (37%) say they do not know whether their town has a Web site.  Just 12% say they are sure their town does not have a Web site. 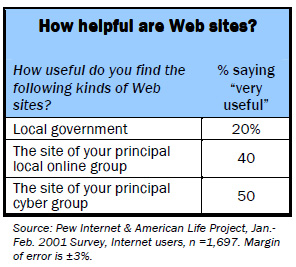 The Internet and public deliberation

A final element in considering the Internet’s role in local communities is public access.  Some see public Internet access as a way to allow those without a computer at home or work to enjoy the fruits of email and the Web.  Others see public Internet access as a way to encourage community chatter, as people hang out at an Internet café or public library to check their email.  When all Americans – Internet and non-Internet users alike – were asked if they knew of a place in their community where the Internet was publicly available, 51% said yes, 32% said no, and 17% said they did not know.  Internet users were much more likely to be aware of a public access site, with 63% saying their neighborhood had a public Internet access site compared with 38% of non-Internet users.  When asked to classify the type of place where the Internet was publicly available, 42% of all Americans said it was the public library, 2% said a school, 1% an Internet café, and 1% said a copy or computer store.

Smaller differences are evident on public access for rural, urban, and suburban users.  Among Internet users, 65% of rural residents say they know of a place in their community where the Internet is publicly available compared with 64% of suburban residents and 59% of urban dwellers.  This relatively uniform finding is somewhat surprising because one might expect rural users, because of greater distance between enclaves of population, would either not know of publicly available Internet sites or simply not have them.  All of this is in the context of higher Internet penetration rates in urban and suburban areas, with 57% of suburban residents and 55% of urban residents having Internet access compared with 44% of rural residents.

In summary, the Internet plays a fairly prominent role at the local level as an information utility and a comparatively small role in organizing public debate.  However, for a subset of Internet users—the most wired and those who are most involved in using the Internet to be part of an online community—use of the Internet helps in community participation.  A significant number of these users can think of a situation in which the Internet helped shape public participation.  As for public access, the Internet does not have the standing of the pay phone when it comes to a publicly available communications tool.  About half of all Americans can say that they know of a public Internet site in their neighborhood, with white Americans (Internet users especially) having greater awareness of these sites than blacks and, to a lesser extent, Hispanics.

The Internet and Daily Life
The Ever-Shifting Internet Population: A new look at Internet access and the digital divide
Teenage Life Online
Older Adults and Social Media
Online Dating & Relationships
Defining generations: Where Millennials end and Generation Z begins
Growing Share of Americans Say They Plan To Get a COVID-19 Vaccine – or Already Have
Quiz: Are you a Core Conservative? A Solid Liberal? Or somewhere in between?
Most Americans Support Tough Stance Toward China on Human Rights, Economic Issues
In their own words: What Americans think about China