Social scientists cite any number of indicators to illustrate that Americans’ level of civic engagement is on the decline.  Membership in organizations whose health may be seen as an indicator of strong community involvement—such as the Parent-Teachers Association (PTA)—has declined steadily over the past several decades.3  The share of Americans voting in presidential elections has fallen since the 1960s, with voting rates in some local elections no higher than 10%.4  There has been some evidence of growth in certain kinds of organization called “tertiary associations,” but that has not been encouraging to those who worry about the decline of community in America. Tertiary organizations have members spread throughout the country, rarely have local chapters, and usually ask members only for a membership check in exchange for an occasional newsletter.  These organizations expect little of their members besides their financial contributions.

While concurring that community involvement is on the wane, many activists believe that the Internet might be able to reverse the trend.  Since the early days of the Web, activists have argued that “community networks” could bind increasingly fragmented communities together and provide a voice for segments of society that have been traditionally ignored.  Such electronic communities can lower the barriers to democratic participation. Advocates hope lower barriers, coupled with deliberate activities that bring all segments of a town or city into the planning process for building community networks, can help revive the community spirit in America.5  These advocates do not argue that it is inevitable that the Internet will create community involvement, but rather that the Internet presents an opportunity to build community at a time when the need is great.6

Though often focused on the opportunities the Internet presents for a renaissance of local places, technology activists also recognize that virtual communities (i.e., online groups that connect people with common interests without any concern about distance) can play an important role in users’ lives.7  One of the earliest proponents of virtual communities, Howard Rheingold, argues that “people anywhere … inevitably build virtual communities” as “informal public spaces disappear from our real lives.”8 Rheingold holds out hope that virtual communities can revive democratic participation, in part by increasing the diversity of sources of information and by sparking public debate that is not mediated by large corporations or special interests.

The hopes for the Internet and community are tempered by the acknowledgement that it is a technology that has the potential to undermine community.  As author Andrew Shapiro points out, the Internet’s potential to give people more control also allows them to restrict the flow of information they receive.  By giving people a choice to block out information that somehow does not “fit” with a community’s beliefs or norms, the Internet could exacerbate existing trends toward community fragmentation.9  Nothing about this is inevitable, but Shapiro notes that the evidence on online communities suggests that some degree of face-to-face interaction is necessary for an online community to be sustainable.10  As Katie Hafner points out in her new account of the pioneering online community “The Well,” this cyber group really gained vitality once members, most of whom lived in the San Francisco Bay Area, had met face-to-face.11

The findings of the Pew Internet & American Life Project survey indicate that something positive is afoot with respect to the Internet and community life in the United States.  People’s use of the Internet to participate in organizations is not necessarily evidence of a revival of civic engagement, but it has clearly stimulated new associational activity.  And, because they have been both physical and virtual, these group interactions are richer than those found in “tertiary associations.”  This type of activity might be likened to what sociologist Ray Oldenburg calls the “third place”—the corner bar, café, or bookstore where people hang out to talk about things that are going on in their lives and neighborhood.12

Although Oldenburg very clearly has physical interaction in mind in talking about third places, the Internet has spurred in cyberspace the types of conversations that Oldenburg describes in third places.  Our survey suggests that significant numbers of Cyber Groupies are enjoying new relationships because of their use of the Internet. One-quarter (27%) of Cyber Groupies say the Net has helped them connect with people of different economic and ethnic backgrounds and 37% say it has helped them connect with people of different generations.  Whether through cyber groups or online groups grounded in local communities, the Internet’s “virtual third places” appear to be building bridges among their participants.

If online communities are to have “third place” characteristics, chatter and connection have to be part of what is occurring when people access these groups. Our survey findings suggest that online communities, far from having passive members who lurk on email lists, are environments where a healthy number of members email others and interact on a frequent basis.  This is especially true for non-local cyber communities, where a quarter of members routinely email other members. 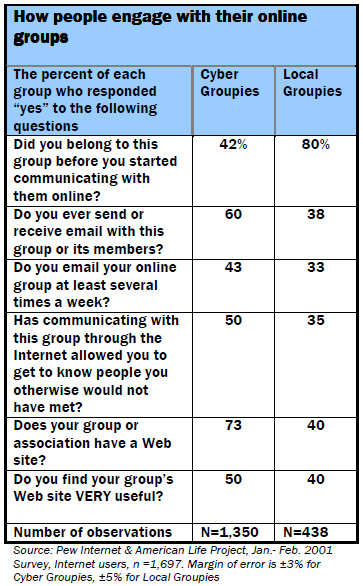 Approximately 23 million Internet users engage in email exchanges with other online group members several times a week.  This is about one-quarter of Cyber Groupies. While much of this emailing (76%) is simply seeking out membership news and group information, a lot of it (68%) involves discussing issues with other group members.  And fully half (49%) of those who email an online group say that one of their main reasons to do so is to create or maintain personal relationships with members.

For Local Groupies—the 68% of Internet users who belong to a group with some connection to the community where they live—there are lower levels of online chatter, perhaps because physical proximity enables face-to-face communication.  Three out of eight (38%) Local Groupies use email to communicate with others in the group. This is conspicuously less than the 60% who email non-local cyber groups.  Of these local emailers, however, one-third (33%) send messages to other group members at least several times a week.  This means that one in eight (13%) of members of online groups that are close to home routinely exchange e-communications with group members. That comes to 10 million Americans.

It is not surprising that Local Groupies report lower levels of engagement with their online groups than Cyber Groupies. Local groups can rely on physical proximity for interaction and members may be accustomed to face-to-face or telephone contact. Most Local Groupies belonged to their principal local organization before they started using the Internet to deal with the group, while most Cyber Groupies did not belong to their main group before they started communicating with it online. Still, one-third (35%) of Local Groupies who go to their group’s Web site or email the group say that participation online with a favorite local group has enabled them to meet new people. This is not as striking as the 50% of Cyber Groupies who report they have gotten to know someone new through their online group, but it illustrates that even in local areas many people use the Internet to make new contacts.

The behavior of people on listservs of their online groups is another indication that chatter is a popular activity in online communities.  For people who go to their online groups’ Web sites, about two-thirds (64%) report that the group has a listserv. Among Internet users whose main online group has a listserv, 60% read and post messages to it.  Roughly a third (33%) of those active on listservs (i.e., those who have ever posted messages) write messages at least several times a week.  This emailing and listserv activity is reflected in how connected people feel to other group members.  Half (50%) of online group members say that participation with group through the Internet has enabled them to meet new people, and nearly half (47%) say the group has made them feel connected to other group members.  About one in five (22%) say that they have arranged to meet in person someone in the group that they first met online.

About half of those who use the Internet to connect to local groups (49%) say these groups have listservs. Overall, about one-third (35%) of people who email a local online group have met someone new in their community with the help of the Internet, and 38% of these emailers say communicating with the local group through the Internet has increased their involvement in their local community. 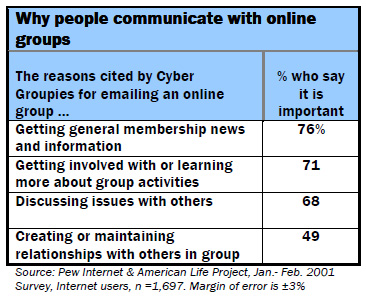 The demographic profiles for Local Groupies and Cyber Groupies are quite similar.  However, some demographic differences emerge when looking at Local and Cyber Groupies who are active participants in online groups, as measured by those who email their groups or go to their Web sites. Perhaps the strongest differences come in Internet experience, where Internet novices are substantially under-represented in the Local Groupie population relative to the overall Internet population, and under-represented relative in the Cyber Groupie population as well. 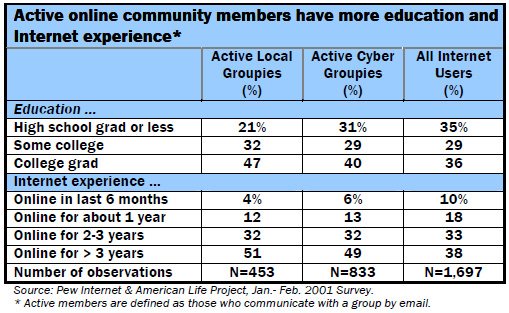