When ARPANET, the Internet’s precursor, came online in 1969, it did not have a foundational moment like the telephone’s, where Alexander Graham Bell’s ordered his associate Thomas Watson: “Mr. Watson, come here, I want you.” That sentence signaled an era of person-to-person communication over distance. In contrast, ARPANET connected a community.  In its earliest days, it was a community of computer researchers at major U.S. universities working on similar problems.2  Since then, the Internet’s capability of allowing many-to-many communications has fostered communities of various sizes and sorts.

In this report, we assess the scope of online communities in the United States and the impact they are having on people’s lives.  We examine two kinds of communities—those that are primarily cyber-based with no inherently geographic aspect (i.e., online communities) and those in which people use the Internet to connect with groups based in the community in which they live (i.e., communities online).  We call members of the former group “Cyber Groupies.” We define people who belong to any group having to do with their community as “Local Groupies” and analyze how they use the Internet to stay in touch with local affairs.

Our survey suggests that going online to connect with a group is a central part of Americans’ Internet experience.  More people have used the Internet to contact an online group than have done extremely popular activities, such as getting news online, health information, or financial information. More people participate in online groups than have bought things online. Fully 84% of all Internet users have contacted an online group at one time or another. We call them Cyber Groupies and there are about 90 million of them. Some 79% of Cyber Groupies identify a particular group with which they remain in contact. Additionally, Cyber Groupies often surf to more than one online group; the average Cyber Groupie has gone to about four different online groups at one time or another.  Finally, a quarter of Internet users (26%) say they have used email and the Web to contact or get information about groups and organizations in their communities. These Local Groupies number more than 28 million.

The demographics of the Cyber Groupie population are fairly close to the overall Internet population.  Where differences do emerge, the pattern suggests that early adopters of the Internet are more likely to have contacted online groups.  This means that Cyber Groupies are more likely to be men and to have college educations or better. Cyber Groupies also tend to be younger than non-groupies. This no doubt is linked to the fact that online groups play a minor role in the lives of people over the age of 55. 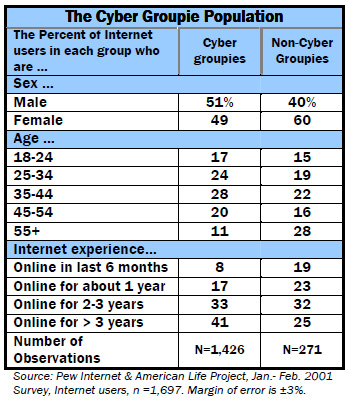 The broad appeal of online groups and the youthful tilt of the Cyber Groupie population—especially among those active in online groups and those who have recently joined them—suggests that the Internet is providing an important place for associational activity for some of the most enthusiastic online Americans.  This is occurring in the context of widespread worry that Americans are less and less willing to get involved in community affairs and group activities.  It is too soon to say that use of the Internet is reversing that trend.  But the findings from this survey indicate that group activity is flourishing online and it is a place that attracts Internet users to new group activity.

Next: Part 2: The Internet, Communities, and the Virtual “Third Place”
← Prev Page
Page1You are reading page2Page3Page4Page5Page6Page7
Next Page →