Different types of online groups attract different types of Internet users and elicit different kinds of participation from members.  People involved in medical support groups are different from people in hobbyist online communities.  Those drawn to groups involved with civic engagement are different from those who belong to professional and trade groups.  And the amount of emailing in the different kinds of groups varies.  This section examines different aggregations of online groups, looking at who joins them and the different levels of chatter and connection among participants.  There is considerable overlap among categories, since the average Cyber Groupie has, at one time or another contacted about four different kinds of Internet groups. The section analyzes Internet users who have ever gone to a certain type of online group. An Internet user who has gone to a belief group and a lifestyle group is counted in both groups in the discussion below.

The Getting Ahead group: 51% of Internet users

People in the Getting Ahead category are those who belong to an online group related to their work, such as Internet groups involving trade and professional associations or labor unions.  Only 6% of Internet users belong to an online group relating to a labor union, thus most of the Getting Aheads are professionals.  And they are primarily males (57%), well educated (45% have college degrees or more compared to 36% of all Internet users), and well off economically (27% have household incomes in excess of $75,000 compared to 21% of all Internet users.  Finally, this group has a lot of Internet experience; 48% have been online for three years or more compared with 38% of the overall Internet population.

The Getting By group: 43% of Internet users

Online groups give people the opportunity to use the Internet to manage their day-to-day responsibilities that do not relate to their career, such as medical conditions or parenting.  In other words, they belong to online communities that can help people get by on a daily basis.13  Groups that help in these areas are support groups that might involve a medical or personal condition or, on the neighborhood level, local youth groups such as the YMCA or scouts.  Combining those two types of groups yields the Getting By category.  The Getting By cohort has more women than men and is skewed towards the 35-44 age bracket.  Fully a third of the Getting By group (34%) are in that age bracket compared to 27% of all Internet users.

Online groups regarding people’s religious or spiritual beliefs are popular among Internet users.  We combined three types of Internet users into a cohort we call the Belief group: people who have used the Net to contact a religious group, people who have reached out to others who share their beliefs, and Internet users who belong to a church or synagogue.  This group looks very much like the Internet population overall, although a bit more likely to be female and well educated; 53% are women (versus 49% overall for Cyber Groupies) and 40% of the Belief Group has a college education or more compared to 36% of the Internet population.

In terms of online chatter, people in the Belief Group tend to value personal connections a bit more than the average member of an online community.  Two-thirds (67%) have emailed an online group, with 46% doing so several times a week or more.  Fully 53% of those in Belief Groups say that creating or maintaining personal relationships with other groups members is an important reason they email group members; this contrasts with 49% of all online community members.  And 74% say that they email the group to get involved with and learn more about group activities, compared with 71% of all online community members.

The distinctiveness of this group carries over to their pattern of chatter in online groups.  Fully 72% email their principal online group (compared with 60% of all online community members) and 51% do so several times a week or every day (against the 43% average).  And 58% email the group to create or establish relationships with other group members, higher than the 49% average for all online community members.  The active emailing extends to messages to online groups involving matters close to home; 53% of ethnic groupies have email local online groups compared to the 38% average.  It is not surprising that, on balance, members of ethnic and racial groups say the Internet has helped them become more involved with the groups to which they already belong.  Nearly 3 in 5, or 57%, say the Internet has increased their involvement in groups.

About one in five (22%) of Internet users have used the Internet to contact a political group or organization, and this subset of Internet users is a predominantly male, educated, veteran group of surfers, with an urban bent.  Fully 60% are male, half (50%) have a college education, and more than half (54%) have been online for three years or more.  And 36% of users who have contacted a political group live in urban areas compared with 31% of all Internet users.  Racially, blacks are underrepresented in this group, as only 4% of those politically involved are black compared to 8% of the Internet population.

Perhaps as a consequence of their lengthy Internet experience, the politically involved engage in a lot of email chatter.  Three quarters (75%) have emailed an online group (45% several times a week or more) and 80% have emailed the group to find out about general group news compared with 76% for all online community members.  For those who have contacted a political group using the Internet, even online politics seems to be local; 55% of this group has emailed a local online group of some sort, compared with 38% of all online community members.  Political Groupies overall seem to approve the Internet’s impact on their involvement with groups to which they already belong; 53% say the Internet has helped improve contacts with groups, 17 points above the Internet average.

People who flock to online entertainment groups look very much like the rest of the Internet population, although they are a bit younger, more urban, and more experienced on the Internet than average.  This group is defined as the 31% of Internet users who have contacted the fan site of a TV show or entertainer or the 50% of users who have contacted an online group having to do with a hobby.  Some 52% of Entertainment Groupies are men and 34% live in urban areas (compared with 31% of all Internet users).  Twenty-one percent are between the ages of 18 and 24, compared with 17% of all Internet users.  Entertainment Groupies also have high levels of Internet experience, with 44% falling into the most veteran category of Internet surfers (three or more years online) compared to the 38% average.

Sports Junkies are the Internet users who have contacted an online group about their favorite sports team, a sports team in a league in which they participate, or they belong to a local sports league.  Sports Junkies tend to be suburban men between the ages of 35 and 44 who have a slightly more Internet experience than the average Internet user.  Fully 59% of these are men and 54% live in suburban areas. Close to one-third (31%) are between age 35 and 44.  Sports Junkies have been online a bit longer than the average Internet user (42% have been online for three years or more), but they have roughly the same educational levels as average online users.

The patterns of online chatter for Sports Junkies follow that of Entertainment Groupies very closely.  Sixty-three percent of Sports Junkies email their online group and 46% do so several times a week or more.  Fully 72% email their group to discuss issues with other group members and 51% do so to establish or create relationships with other group members. And 74% email the group to learn more about group activities or to become more involved with the group.

Looking across these classifications of online community members, the groups that are most actively engaged, as measured by the amount of emailing by members, are Political Groupies, Lifestylers, members of ethnic and racial groups, and Civic Engagers.  In each group, 70% or more email other group members, well above the 60% average.  Online experience seems most strongly associated with engagement in online groups, with the groups with the most frequent emailing having a large share of the Internet’s most experienced users. 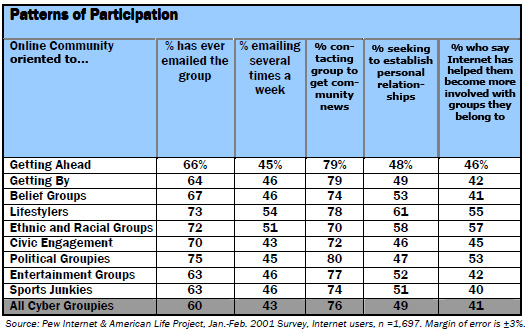 There is also a correspondence between online experience and emailing local groups.  For Political Groupies, Lifestylers, Civic Engagers, and members of ethnic and racial groups, the rate of local online group emailing is well above the average, and these groups contain the most experienced Internet users relative to the others.  Internet users in these categories are also more likely than average to say the Internet has helped them become more involved with groups that they already belong to, with that finding being strongest for ethnic and racial groups, Lifestylers, and Political Groupies.

In looking at these active categories of online groups, two divisions stand out.  First, the high levels of chatter among Civic Engagers and Political Groupies signals good news to those who hope that the Internet may contribute to a revival of American civic life.  A substantial number of Internet users have contacted such groups using the Internet (29% have contacted a local community association and 22% have contacted a political group) and these users have a tendency toward establishing serious connections to online groups.  Second, groups that have fairly direct ties to people’s lifestyle or race/ethnicity also draw members willing to engage in online chatter and connection.

Although Belief Groups are not listed as highly engaged groups (because “only” 67% of members send emails), even that category’s users report a relatively high incidence of emailing others to establish personal connections with other members.  In some respects, the categories that have active emailers are inherently more interactive than the others.  If you are interested in finding others who share your beliefs or lifestyle, you probably want to chat with them.  If you are a fan of a TV show or a sports star, you may be more interested in getting information from a Web site about Tiger Woods or Jennifer Anniston than talking with other fans.

Next: Part 5: The Internet and the Local Scene
← Prev Page
Page1Page2Page3Page4You are reading page5Page6Page7
Next Page →

The Internet and Daily Life
The Ever-Shifting Internet Population: A new look at Internet access and the digital divide
Teenage Life Online
Online Dating & Relationships
Older Adults and Social Media
Quiz: Are you a Core Conservative? A Solid Liberal? Or somewhere in between?
More Americans now say academic concerns should be a top factor in deciding to reopen K-12 schools
Defining generations: Where Millennials end and Generation Z begins
How the Coronavirus Outbreak Has – and Hasn’t – Changed the Way Americans Work
Views on Race in America