Net Joiners: The people who find groups on the Internet, then become members

In addition to fostering chatter, the Net is drawing people to groups they had not previously encountered. In part of our survey we asked respondents about the online group they most frequently contacted via the Internet. We enquired whether they belonged to this group before they started using the Internet. More than half of Cyber Groupies (56%) joined the group after having begun communicating with it over the Internet. For Local Groupies, 20% joined the group after they begun communicating with it on the Internet. We call the people who have joined a group after being in contact via the Internet “Net Joiners.” The people who already belong to a group and who then begin to use the Internet to stay in touch with group activities are “Long-timers.” 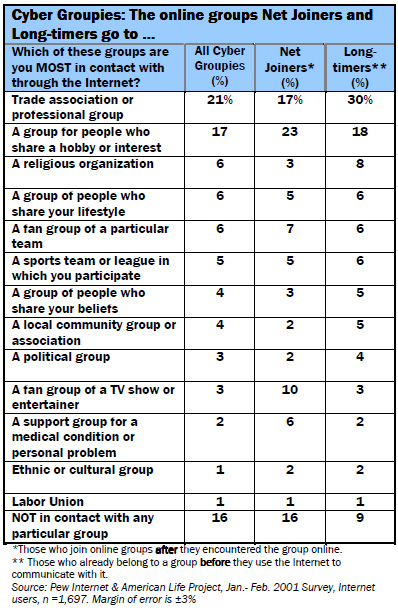 Net Joiners generally have less Internet experience than Long-timers. Net Joiners are also more demographically diverse than Long-time group members. Notably, the joiners as a group are younger than the overall Internet population. Although Net Joiners tend to report lower levels of frequent participation in online groups than Long-timers do, there does not appear to be pervasive lurking among either Net Joiners or Long-timers.  Many people, when thinking about the group with which they are most involved, report they are active participants in online discussions.

Joiners of online groups, whether they are cyber groups or local groups, have different membership patterns.  Net Joiners are drawn principally to hobbyist groups, whereas Long-timers are most involved with trade or professional associations.  For Local Groupies, the differences are more striking.  While most Long-time members of local groups are most engaged with religious groups, Net Joiners are evenly split among religious groups and local youth groups. Moreover, they are interested in charitable groups, neighborhood associations, and local sports leagues.

On average, Cyber Groupies are most likely to say that a trade or professional group is the online group with which they most closely stay in touch (21% say this), followed closely by hobby groups (17%).  In contrast, Net Joiners of online groups are most involved with a group having to do with a hobby.

Net Joiners are less involved with their online group than Long-time members, if involvement is measured by email traffic with the group, new acquaintances made, and perceptions about overall engagement with the group.  About half of all Net Joiners (49%) say they use email to communicate with an online group, well below the three-quarters (78%) of Long-timers who use the Internet to keep in touch with it.  However, when measured by frequency of email contact, Net Joiners are about as likely as the Long-time members to send or receive an email from the group at least several times a week (41% for Net Joiners to 45% for Long-timers).

Those who join online groups seem a bit more interested in using the Internet to monitor group news than their more veteran counterparts.  Fully 79% of Net Joiners use the Internet to get general membership information and news about the group compared with 74% of Long-timers. Although about the same share of Net Joiners and veteran members use email to discuss issues with group members (67% of Net Joiners and 70% of veteran members), pre-Internet members are more likely to use email to create or maintain personal relationships with group members than Net Joiners (by a 53% to 44% margin).

Demographically, Net Joiners of cyber groups are more likely than Long-timers to be female, young, non-white, come from households with modest incomes, and relatively new to the Internet. Net Joiners are far less likely to have a college education than Long-timers and twice as likely to be in a household making less than $30,000 per year.  Net Joiners are also about twice as likely as Long-Timers to be Hispanic or African-American. Another notable difference comes in Internet experience.  These figures suggest that not only are cyber groups a magnet for Internet users, they are especially attractive to novice Internet users.

Those who take their communities online

Internet users who have joined a local group after encountering it online are most likely to be involved with a religious group (a local church, synagogue, or mosque) or a local youth group.  About 1 in 7 (15%) Net Joiners keep most in touch with a local religious group and 14% are most engaged with a local youth group.  Eleven percent of Net Joiners are most involved with a local social club or charitable organization, 10% with a sports league, and 10% with a neighborhood group or community organization.

The story is somewhat different for people who already belonged to a local group at the time they started communicating with it through the Internet.  By far, the local church, synagogue, temple, or mosque is the type of group with which these users say they are most involved.  Fully one-third (34%) says a religious organization is the main local group they communicate with over the Internet, far ahead of the 10% that report a community group or neighborhood association as their main contact group.  Local sports leagues and local charitable or social clubs come in next.

No matter when they joined local groups – before using the Internet or after they got connected to the Net – there is no significant difference in the online behavior of those who use the Internet to interact with local groups. Their use of email with such groups and the frequency of their emailing are virtually the same whether they are Net Joiners of local groups or Long-timers with those groups. 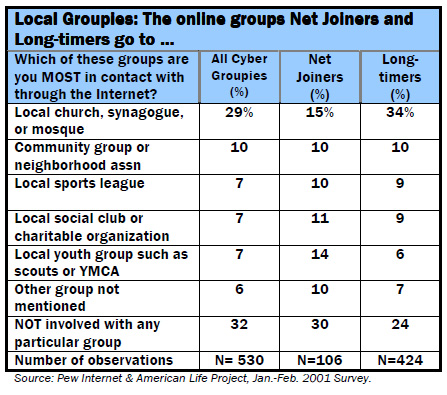 Those who join local groups often report that their initial contact blossoms into new contacts and friendships. We asked Net Joiners if communicating with their group through the Internet has led them to meeting new people in their community and 57% said it had. About 30% of Long-timers said “yes” to this.  This difference is not too surprising, since people who were members of the group prior to using the Internet to communicate with it already had ties to other group members.

For millions, use of the Internet cuts two ways in their social lives: It helps them find others who share their passions or lifestyles or professional interests. It also helps them feel more connected to groups or people they already know.

The table below summarizes Internet users’ perspectives on how the Internet allows them to connect to different groups or people.  The Internet’s strongest bridges are relatively short ones. Online Americans most often say that the Internet has helped them connect to groups with which they are already involved or people or groups with common interests.  Still, between one-quarter and one-third of Cyber Groupies say that the Net has helped them connect with people of different ages, ethnic backgrounds, or economic backgrounds.  One bridge that the Internet does not build, at least to a large extent, is to local community groups.  Of the 26% of Cyber Groupies who said it has helped connect them to nearby groups, only 6% says it has helped them “a lot” in getting them in touch with locally-based groups.

Cyber Groupies who are active in their online group are more likely to use the Net to connect with new people or groups.  These users—defined as those who are members of a local and cyber group and who exchange emails with the group—are substantially more likely than other Internet users to report that the Internet has deepened their ties to groups to which they already belong or to local community groups. They enjoy a kind of “participatory premium.”

The effect is also significant when survey respondents are asked how effective the Internet is in helping them find people who share their interests or beliefs. Those active in online communities are more likely than other Internet users to say their online activities help them connect with people of different backgrounds. Given that the pool of active online community members is among the Internet elite (the technology’s early adopters who tend to be white, wealthy, and educated) this last finding is understandable.  These users are accustomed to talking to those people and groups with whom they have conversed since they came to the Internet. On average, these people are not too different from each other. 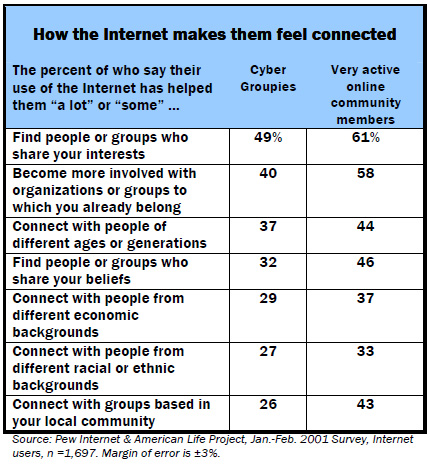 In sum, online communities are enabling Internet users to build bridges to other groups and people, while at the same time deepening ties to groups and ideas with which people are already involved.  As the Internet draws people to online groups, it is notable that these people (i.e., Net Joiners among Local Groupies) are ethnically more diverse than other Internet users.  As the Internet disseminates more broadly throughout the population, there are signs that online groups may facilitate new connections across ethnic, economic, and generational categories.  It is also worth underscoring that young people seem especially interested in taking advantage of the Internet’s bridge building potential in online groups.  As noted at the outset, there is pervasive worry that young people shy away from group activity and civic engagement.  With the online groups drawing young people into groups involved with their local community, this survey suggests that the Internet may develop into an important new avenue for civic engagement among young people.

Next: Part 4: The Differences Among Online Group Members
← Prev Page
Page1Page2Page3You are reading page4Page5Page6Page7
Next Page →

The Internet and Daily Life
The Ever-Shifting Internet Population: A new look at Internet access and the digital divide
Teenage Life Online
Online Dating & Relationships
Older Adults and Social Media
Quiz: Are you a Core Conservative? A Solid Liberal? Or somewhere in between?
More Americans now say academic concerns should be a top factor in deciding to reopen K-12 schools
Defining generations: Where Millennials end and Generation Z begins
How the Coronavirus Outbreak Has – and Hasn’t – Changed the Way Americans Work
Views on Race in America