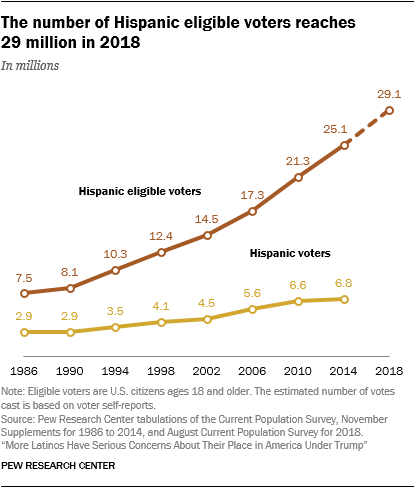 During the 2018 midterm election season, Hispanic registered voters show signs of being more engaged than in past midterms. According to the new survey, more Hispanic voters today say they have given “quite a lot” of thought to the coming election than they did in 2014 and 2010, and a majority of these voters say they are more enthusiastic about voting in this election than they typically are in midterm elections. At the same time, the number of U.S. Hispanics eligible to vote (U.S. citizens ages 18 years and older) has reached a record 29.1 million, up by 4 million since 2014 alone.

This enthusiasm stands in contrast to trends in Hispanic voting in recent midterms. In 2014, Hispanics cast a record 6.8 million ballots out of 25 million eligible voters, for a voter turnout rate of 27%. But that was far below the turnout rate among blacks (41%) and whites (46%) that year. It was also down from 2010, when 31% of Hispanic eligible voters turned out to vote.

Latinos more engaged in 2018 midterms than prior ones 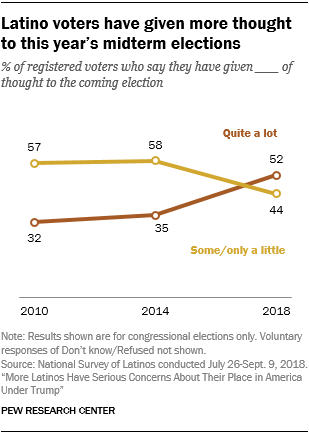 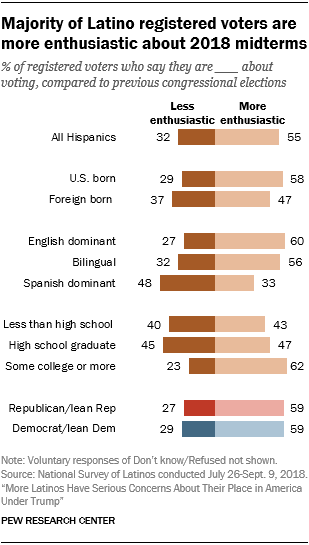 Interest in the midterms varies greatly among subgroups of Hispanic registered voters. About six-in-ten (63%) Hispanic voters with some college education or more have given a lot of thought to the coming midterm elections, compared with 39% of those with a high school diploma and 37% of those with less than a high school education.

In addition, Hispanics ages 30 and older are more engaged than their younger peers, as 56% have given the elections a lot of thought, compared with 40% of those 29 or younger.

Another result from the survey – responses to a question about enthusiasm – shows the increased engagement of the Latino electorate this year compared with previous midterm elections. A majority (55%) of Latino registered voters say they are more enthusiastic about voting this year than in previous congressional elections, while 32% say they are less enthusiastic and 11% volunteer that they are as enthusiastic as usual.

Latinos and their views of the political parties 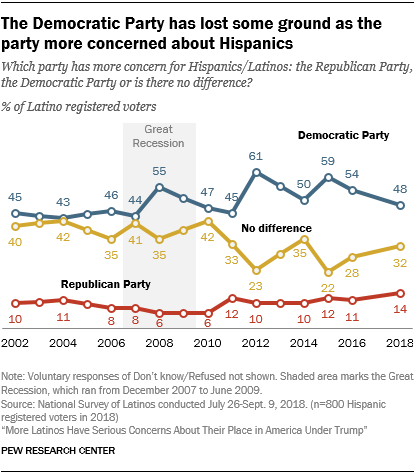 The Democratic Party has lost ground since 2016 among Latino registered voters. 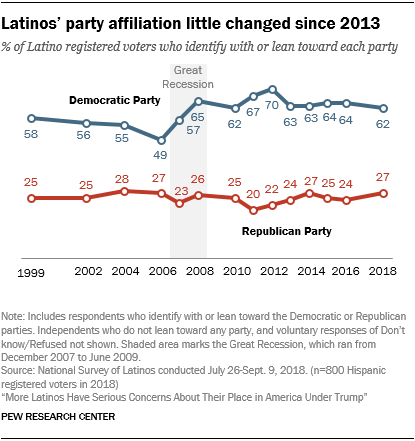 Party affiliation among Latino registered voters has changed since 2012, when there was a spike for Democrats. In 2018, 62% of Latino voters identify with or lean toward the Democratic Party.

Meanwhile, the share of Latino registered voters who identify with or lean toward the Republican Party has rebounded from a low of 20% in 2011 to 27% today.

Among Latino registered voters, those who primarily speak English are more likely to align themselves with the Republican Party (33%) than those who are Spanish dominant (15%). 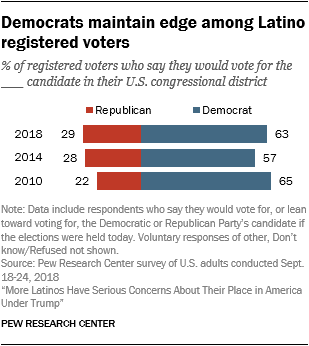 According to a survey of U.S. adults conducted in September 2018 by Pew Research Center, if the election for Congress were held today, 63% of Latino registered voters say they would support the Democratic congressional candidate in their district, while 29% say they would support the Republican candidate. Among all Latino registered voters, Democrats hold a two-to-one margin over Republicans this year.

The share of Latino registered voters who say they would vote for the Democratic candidate is up from 2014; support for the Republican candidate remains unchanged.

Next: Acknowledgments
← Prev Page
Page1Page2Page3Page4Page5Page6You are reading page7Page8Page9Page10Page11
Next Page →

More Latinos Have Serious Concerns About Their Place in America Under Trump 1. Latinos have become more pessimistic about their place in America 2. Latinos and discrimination 3. Hispanics have become more dissatisfied with direction of U.S. 4. Views of immigration policy 5. Views of President Donald Trump
6. Hispanic voters and the 2018 midterm elections
Latinos more engaged in 2018 midterms than prior onesLatinos and their views of the political partiesHispanics voter preferences for the coming midterm elections
Acknowledgments Methodology Appendix A: References Appendix B: Additional table