With less than 50 days until the 2018 congressional elections, Democrats hold a 10-percentage-point advantage over Republicans on the generic ballot among all registered voters.

Today, 52% of registered voters say they support or lean toward the Democratic candidate for Congress in their district, while 42% say they prefer the Republican candidate.

The share of voters who say they support or lean toward the Democratic candidate is slightly higher than it was in June (48% then, 52% today), while the share who back GOP candidates is little changed (43% then, 42% now).

Today, as in earlier surveys, there are wide differences in voting preferences by gender, race, education and age.

While those ages 50 and older are split in their choice of candidate, Democrats have a significant edge among younger voters.

Voters express record high levels of enthusiasm for a midterm 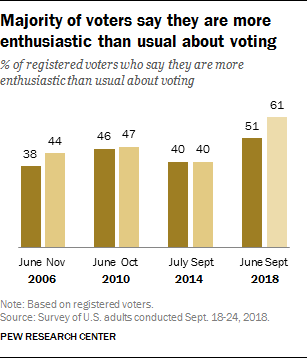 As the election approaches, a growing share of voters say they are “more enthusiastic than usual about voting” – and the share expressing this is now substantially higher than in any midterm election since the question was first asked two decades ago.

In June, 51% of registered voters said they were more enthusiastic than usual. Three months later, 61% say this, which is 14 points higher than the prior high for this measure (47% in October 2010).

Today, only 22% of voters say they are less enthusiastic about voting than usual – no fewer than three-in-ten said this in prior midterms – while 14% volunteer that they feel about as enthused as in previous congressional elections. 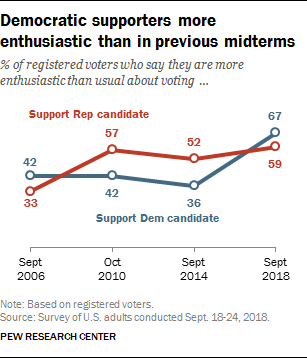 Among those who support Democratic candidates, reported levels of enthusiasm are much higher than in past midterm years: Two-thirds (67%) say they are more enthusiastic than usual; by contrast, fewer than half said this in midterms dating back to 2006. Among GOP voters, 59% say they are more enthusiastic than usual about voting – on par with the share saying this in October 2010 and modestly higher than in 2014. 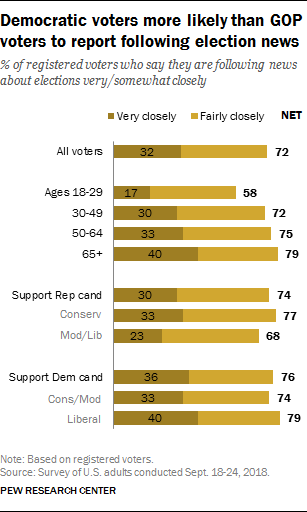 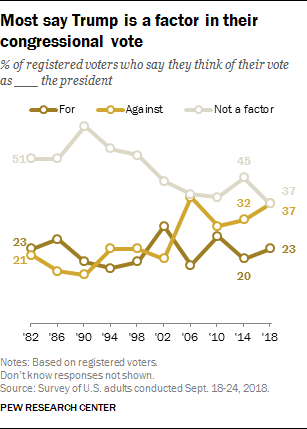 For most voters, Trump looms large in their congressional vote

Overall, six-in-ten voters (60%) say that Trump will factor into their vote for Congress this fall. This is larger than the share of voters who said Barack Obama would factor into their 2014 congressional vote choice, but similar to the percentage who named Obama in 2010 or George W. Bush in 2006 at similar points in those election years.

About two-thirds (66%) of Democratic and Democratic-leaning voters say they think of their vote for Congress as a vote against Trump, while about half (48%) of Republican and Republican-leaning voters say they think of their vote as a vote for Trump. The share of Republicans and Republican leaners who say their congressional vote is for Trump is higher than the share saying this about Bush in October 2006 but roughly on par with the share of Democrats who considered their 2010 congressional vote as a vote in support of Obama. 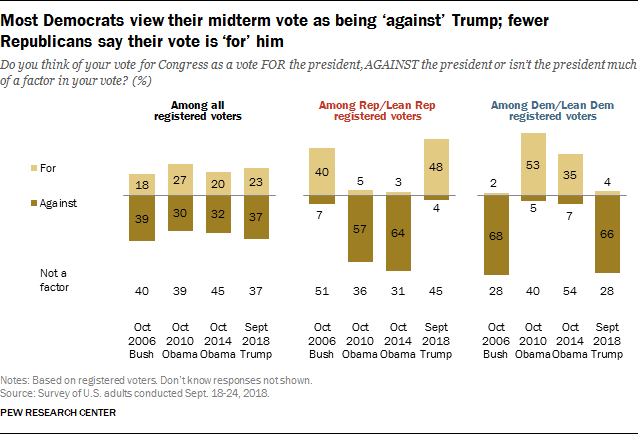 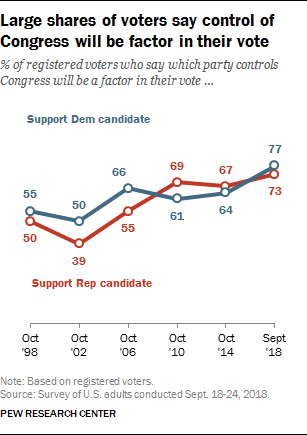 About seven-in-ten voters (72%) say that which party will be in control of Congress is a factor in their vote in November, the highest share saying this in any election over the past two decades. While the share of Republican supporters who say this is only modestly higher than the share saying this in 2010 and 2014, among Democratic supporters, the share who say party control is a factor in their vote is substantially higher than in any prior midterm election dating back two decades.

Next: 3. Wide partisan differences on importance of many issues
← Prev Page
Page1You are reading page2Page3Page4Page5
Next Page →

Voter Enthusiasm at Record High in Nationalized Midterm Environment
2. Democrats have edge in 2018 midterm voting preferences
Voters express record high levels of enthusiasm for a midtermFor most voters, Trump looms large in their congressional vote
3. Wide partisan differences on importance of many issues 4. Public now divided over which party could better handle the economy Methodology