Voters who plan to support Republican or Democratic candidates this November differ over the importance of many issues to their 2018 votes, but one issue that ranks high across the political spectrum is Supreme Court appointments: 81% of Democratic voters and 72% of GOP voters consider this to be very important to their vote this year. 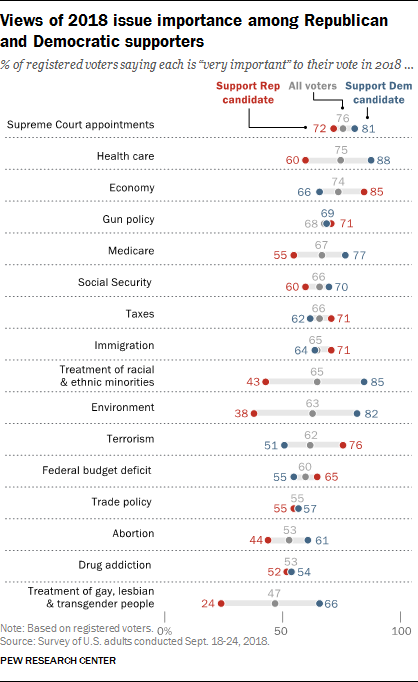 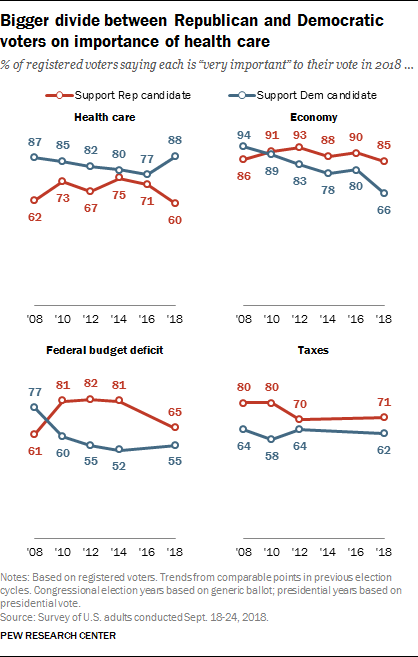 Health care is a more important issue to Democratic voters this year than in 2016 or 2014, while its importance has fallen among voters supporting Republicans. Before the 2014 midterm elections, there was a 5-percentage-point gap between Republican and Democratic voters; this fall the gap is 28 points.

The federal budget deficit has been more important to Republicans than to Democrats since 2010, but the share of Republicans saying this is down by double digits (65% say this today, down from 81% in 2014 and 82% in 2012). Among voters in both parties, the importance of taxes is little changed from 2012.

Over much of the last decade, Republican voters have been more likely than Democratic voters to say immigration is a very important issue in their vote. But the gap is narrower than in the past. Today, the gap between Republicans and Democrats is just seven points (71% to 64%). 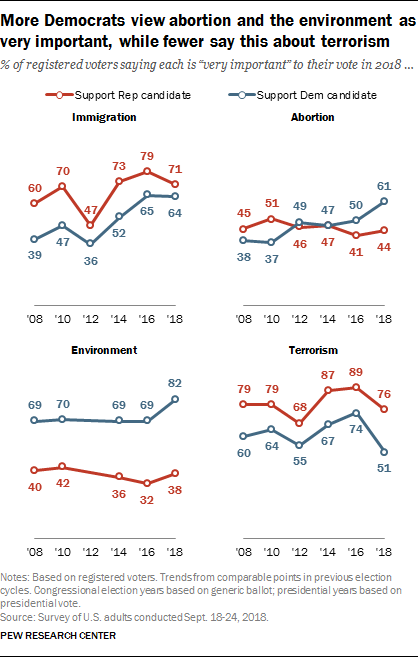 Supporters of Democratic candidates have consistently been more likely than GOP backers to consider the environment to be very important to their vote choice, but the share of Democratic voters saying this has increased from past years. About eight-in-ten (82%) now say this is very important, up from 69% in both the 2016 and 2014 elections. There is little change in the importance of this issue among Republican supporters. 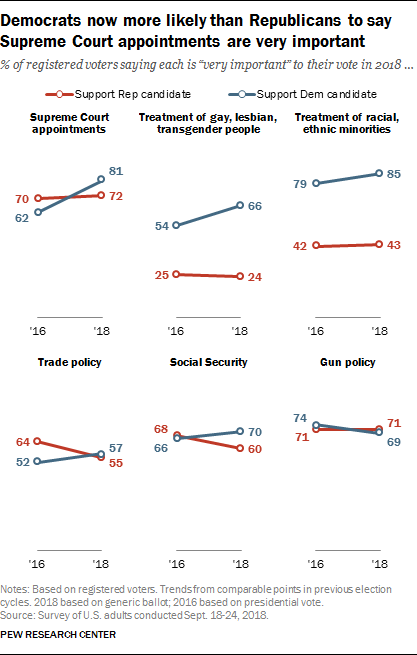 While several issues have become more important priorities for Democratic voters, terrorism has fallen sharply in importance. About half of Democratic voters say terrorism will be very important, down 23 percentage points from 2016. The partisan gap over the importance of terrorism, which has been evident for a decade, now stands at 25 points (76% of Republicans, 51% of Democrats).

As Congress considers Brett Kavanaugh’s nomination to the Supreme Court, appointments to the high court rank among the top issues for both Democratic and Republican voters this year. But, in contrast to 2016, Democratic voters are now more likely than Republican voters to say this is very important to their vote. The share saying this among Republican voters is largely unchanged from 2016 (about seven-in-ten both years), but the share of Democrats saying the court is very important for their vote is 19 points higher than it was in 2016 (81% now, 62% then).

The share of voters saying the treatment of gay, lesbian and transgender people is very important is up this fall among Democratic supporters (66% now from 54% in 2016) but little changed among Republican backers (24% now; 25% in 2016).

The pattern since 2016 is similar for the importance of the treatment of racial and ethnic minorities. Currently, about twice as many Democrats (85%) as Republicans (43%) rate this issue as very important.

Next: 4. Public now divided over which party could better handle the economy
← Prev Page
Page1Page2You are reading page3Page4Page5
Next Page →

Voter Enthusiasm at Record High in Nationalized Midterm Environment 2. Democrats have edge in 2018 midterm voting preferences
3. Wide partisan differences on importance of many issues
4. Public now divided over which party could better handle the economy Methodology