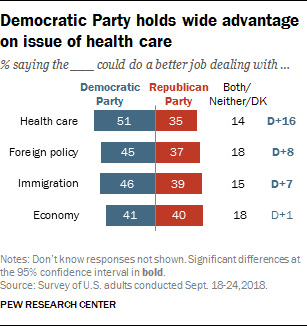 As the midterms approach, the two parties run about even on the issue of the economy, while the Democratic Party holds a wide advantage on health care and modest leads on foreign policy and immigration.

The Democratic Party holds a narrow 7-point edge over the Republican Party as the party seen as better able to handle the issue of immigration (46%-39%) and a similar 8-point advantage (45%-37%) on which party could better handle foreign policy.

Public views on which party could better handle foreign policy and health care are little changed over the last year. 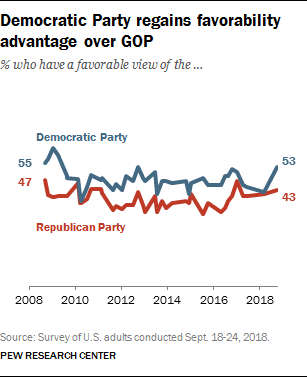 The public now holds a more favorable view of the Democratic than Republican Party – marking a shift from earlier this year when the two parties were rated about the same.

Overall, 53% have a favorable view of the Democratic Party compared with 42% who have an unfavorable view. Favorable ratings are up 11 points from 42% in March.

By contrast, more hold an unfavorable (52%) than favorable (43%) view of the Republican Party. GOP ratings are about the same as they were in the spring. Over the past 10 years, the Democratic Party has often held a favorability advantage over the GOP, with last spring being one of several exceptions.

Among independents who lean Democratic, ratings of the Democratic Party have rebounded from recent years. In March, just 53% of Democratic leaners said they had a favorable view of the party, 81% now say this. Ratings among Democrats have seen a more modest movement in the positive direction (82% favorable in March; 92% favorable today).

Voter Enthusiasm at Record High in Nationalized Midterm Environment 2. Democrats have edge in 2018 midterm voting preferences 3. Wide partisan differences on importance of many issues
4. Public now divided over which party could better handle the economy
Democratic Party favorability rises ahead of midterms
Methodology