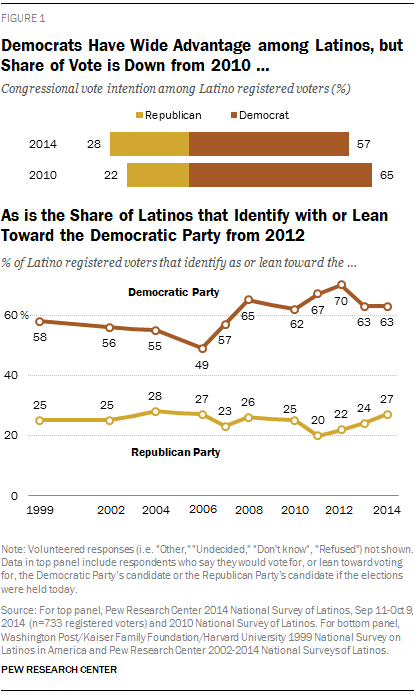 After more than a year of inaction by Congress and President Obama on immigration reform, Democrats maintain a wide, but diminished, advantage among Hispanic registered voters, according to a new nationwide survey of 1,520 Hispanic adults, including 733 registered voters, by the Pew Research Center.

The survey also finds that for about half of Hispanic registered voters (54%), a candidate’s position on immigration is not a deal-breaker in determining their vote if that candidate shares their views on most other issues. 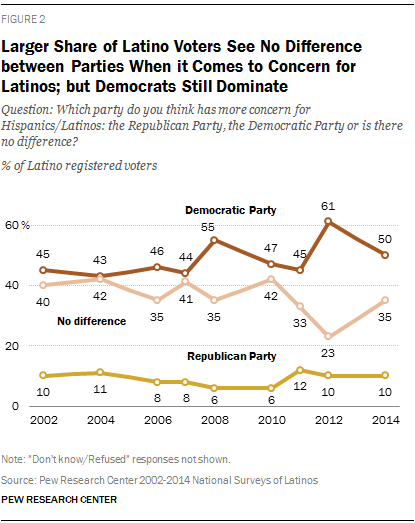 Meanwhile, Republicans have made some progress among Hispanic voters. About one-quarter (27%) today say they identify with or lean toward the Republican Party. In 2012, 22% said the same.

But Republican Party gains among Hispanic registered voters in terms of party identification do not extend to Hispanic voters’ views of the party. Just 10% say the Republican Party has more concern than the Democratic Party for the Hispanic community, unchanged since 2012. Instead, the share of Hispanic registered voters who say there is no difference between the two parties is up, to 35% today from 23% in 2012.

The Latino vote has grown in importance in recent years and has played important roles in both of President Obama’s victories. In 2008, Obama won 67% of the Latino vote (Lopez, 2008). That share rose to 71% in 2012 (Lopez and Taylor, 2012). This year, a record 25.2 million Latinos are eligible to vote, though most live in states or congressional districts that do not have close races (Lopez, Krogstad, Patten and Gonzalez-Barrera, 2014).

Hispanics and the Immigration Issue 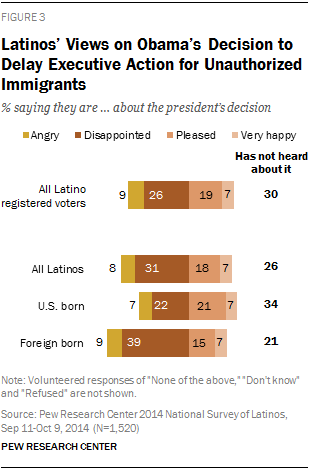 The past year has been characterized by inaction on immigration reform at the federal level. The U.S. House of Representatives did not take up a bi-partisan U.S. Senate immigration reform bill passed during the summer of 2013. And President Barack Obama’s summertime promise to use his executive powers to extend deportation relief to some of the nation’s 11.3 million unauthorized immigrants has been put on hold until after the November elections.1

Among those who have heard about the president’s decision, the survey shows that about a third (35%) of Latino voters are either disappointed (26%) or angry (9%) about the delay. But about a quarter (26%) say they are pleased (19%) or very happy (7%) about it.

The survey also shows that immigration reform is a priority for Hispanics. Two-thirds (66%) of Hispanic registered voters say it is extremely important (30%) or very important (36%) that the president and Congress pass significant new immigration legislation soon. Among all Hispanics, three-quarters (74%) say the same.2

When asked who is responsible for the lack of immigration reform this year, Latino registered voters place more blame on Republicans in Congress (45%) than congressional Democrats (14%) or President Obama (20%). By contrast, among all Latinos, just as many blame Republicans (40%) as blame either congressional Democrats (15%) or President Obama (24%).

Overall, the issue of immigration does not rate as high as some other issues among Hispanic voters. Instead, when asked about five issues that might be discussed in this year’s congressional campaign, more say education (92%), jobs and the economy (91%) and health care (86%) are extremely important or very important to them. By comparison, 73% say the same about immigration. Following immigration, 66% of Hispanics voters say the issue of conflicts in the Middle East is extremely or very important to them.

Latino Voter Motivation in 2014 Unchanged from 2010 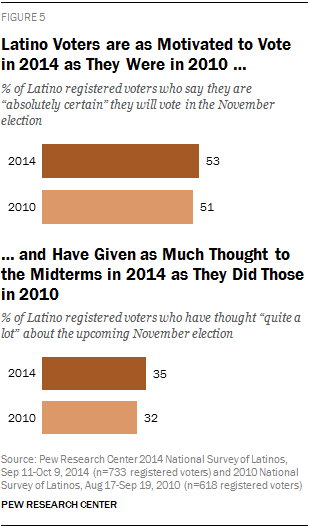 Hispanic registered voters are just as motivated to vote and are paying as close attention to this year’s midterm elections as they were in 2010, according to the survey. About half (53%) of Hispanic registered voters say they are absolutely certain they will vote this year, unchanged from the 51% who said the same in 2010. And today 35% say they have given this year’s election “quite a lot” of thought compared with 32% who said the same in 2010.

Despite record turnout among Latinos in recent elections, Latino voter turnout rates have been below those of other groups. In 2010, a record 6.6 million Latinos voted. But that represented just 31.2% of Latino eligible voters, a share that lagged behind blacks (44%) and whites (48.6%) (Lopez, Krogstad, Patten and Gonzalez-Barrera, 2014).3

This report is based on a nationally representative bilingual telephone survey of 1,520 Hispanic adults, including 733 registered voters, conducted from Sept. 11 through Oct. 9, 2014, by the Pew Research Center. The survey was fielded after President Obama’s decision to delay any executive action extending deportation relief to more of the country’s unauthorized immigrants. The margin of sampling error for the full sample is plus or minus 3.2 percentage points at the 95% confidence level; for registered voters, the margin of sampling error is plus or minus 4.8 percentage points.

The Nation’s Direction, President Obama and the Situation of Latinos

The Political Parties and Issues

Interviews were conducted for the Pew Research Center’s Hispanic Trends Project by SSRS.

The terms “Latino” and “Hispanic” are used interchangeably in this report.
References to other races and ethnicities are to the non-Hispanic components of those populations. “Asian” does not include Pacific Islanders.
“Native born” refers to persons who are U.S. citizens at birth, including those born in the United States, Puerto Rico or other U.S. territories and those born abroad to parents at least one of whom was a U.S. citizen.

Next: Chapter 1: Latino Voter Interest, Engagement and the Congressional Vote
← Prev Page
You are reading page1Page2Page3Page4Page5Page6Page7Page8Page9
Next Page →

Latino Support for Democrats Falls, but Democratic Advantage Remains
Hispanics and the Immigration IssueLatino Voter Motivation in 2014 Unchanged from 2010
Chapter 1: Latino Voter Interest, Engagement and the Congressional Vote Chapter 2: The Nation's Direction, President Obama and the Situations of Latinos Today Chapter 3: Latinos and the Political Parties Chapter 4: Top Issues in this Year's Election for Hispanic Voters Chapter 5: Hispanics and their Views of Immigration Reform References Appendix A: Additional Table Appendix B: National Survey of Latinos Methodology