The Republican Party holds a clear advantage in voter engagement in this fall’s midterm elections, according to a new national survey by the Pew Research Center. Yet GOP voters are not as enthused and engaged as they were at this point in the midterm campaign four years ago, prior to the Republican Party winning control of the House of Representatives, or as Democratic voters were in 2006, before Democrats gained control of Congress.

The latest survey by the Pew Research Center, conducted July 8-14 among 1,805 adults, including 1,420 registered voters, finds neither party has an advantage in voter preferences. Currently, 45% say if the election were held today they would support the Republican in their district or lean toward the Republican, while 47% favor the Democrat or lean Democratic.

The two parties also ran even on the so-called “generic ballot” throughout much of the 2010 campaign. The GOP’s victory in the national popular vote in 2010 – and their gain of 63 seats in the House – was ultimately fueled by a sharp rise in turnout by the Republican base, particularly among conservatives and older voters.

Today, the Republicans lead on a number of key engagement indicators, though in some cases by smaller margins than four years ago. Currently, 45% of registered voters who plan to support the Republican in their district say they are more enthusiastic about voting than in prior congressional elections; that compares with 37% of those who plan to vote for the Democratic candidate. The GOP had a 13-point enthusiasm advantage at this point in the midterm campaign four years ago (55% to 42%) and the Democrats held a 17-point advantage eight years ago (47% to 30%).

Barack Obama is as powerful a motivating factor for Republican voters as he was in 2010: about half (51%) of those who say they will vote Republican this fall consider their vote as a vote “against” Obama, little changed from June 2010 (52%). And Obama has become a less positive factor for Democrats – 36% of those who plan to vote for the Democrat in their district view their vote as being “for” Obama, down from 44% four years ago. (For more on Obama’s job ratings.) 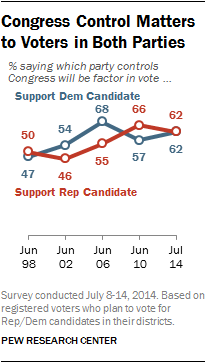 Anti-incumbent sentiment also remains widespread: Only about half of all registered voters (48%) want to see their own representative reelected and just half as many (24%) would like to see most members of Congress reelected. These also are close to two-decade lows in Pew Research Center surveys.

Yet unlike in the previous two midterms, anti-incumbent sentiment is shared fairly equally among both Democratic and Republican voters. Today, 38% of those who support the GOP candidate in their district say their own representative does not deserve reelection; nearly as many Democrats (34%) share that view. In 2010, when Democrats still controlled Congress, twice as many GOP voters as Democratic voters wanted to see their own representative defeated (44% vs. 22%); in 2006, when the GOP controlled Congress, anti-incumbent sentiment was far more widespread among Democrats (39%) than Republicans (22%). 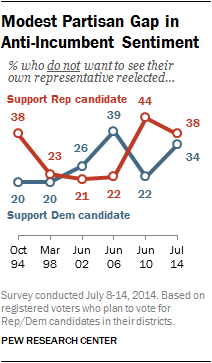 However, even in the pivotal midterms of 2010 and 2006 when anti-incumbent feeling was prevalent, most members of Congress were reelected. The 2010 midterm was a high turnover election: 54 incumbents, all of them Democrats, were defeated for reelection. That was the highest number in half a century, according to Vital Statistics on American Politics. Even so, 91% of all House members won reelection that year.

Next: Section 1: The 2014 Midterm: Voter Preferences, Voter Engagement
← Prev Page
You are reading page1Page2Page3Page4
Next Page →