With four months to go before the 2014 midterm elections, the preferences of registered voters are about evenly divided: 47% say they plan to vote for the Democratic Party’s candidate in their district, while 45% say they plan to back the Republican Party’s candidate. There has been little change in voter preferences over the four previous Pew Research Center surveys measuring 2014 midterm voting intentions.

There are wide gender, educational and income differences in voter preferences. Republicans currently hold a 10-point lead among men (50% to 40%), while Democrats have a 12-point advantage among women (52% to 40%).

Middle-income voters – those with family incomes between $50,000 and $74,999 – favor the GOP candidate by a wide margin (57% to 33%). Democrats hold a 13-point advantage (52% to 39%) among voters with incomes of less than $30,000, while voters in other income categories are divided. (For a closer look at midterm vote preferences, see the detailed table that accompanies this report.) 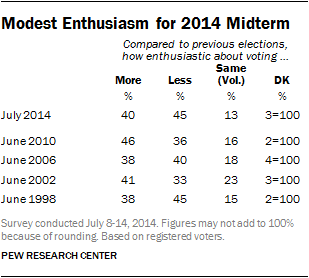 The percentage saying they are less enthusiastic about voting than usual is as high as it has been since 1998, in the midterm elections held in Bill Clinton’s second term, following the scandal surrounding his affair with Monica Lewinsky. 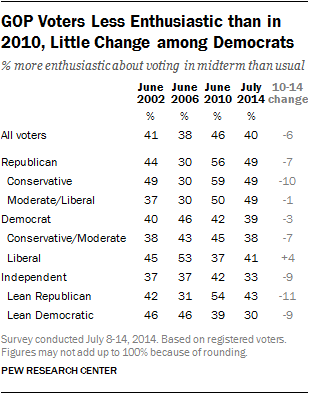 About half of Republican voters (49%) say they are more enthusiastic about voting this year than in the past, compared with 39% of Democrats. While Republicans maintain an enthusiasm gap over Democrats, the size of this advantage is more modest than in 2010.

Conservative Republicans are 10 points less likely to express greater midterm voting enthusiasm today than in 2010 (49% vs. 59%). By contrast, 41% of liberal Democrats say they are more enthusiastic than usual about voting in the 2014 midterms; in 2010, 37% said this.

Enthusiasm among independents is lower today than in 2010 (33% vs. 42%) and has ticked down among both Democratic-leaning and Republican-leaning independent voters.

Party Control of Congress a Factor in Midterm Vote 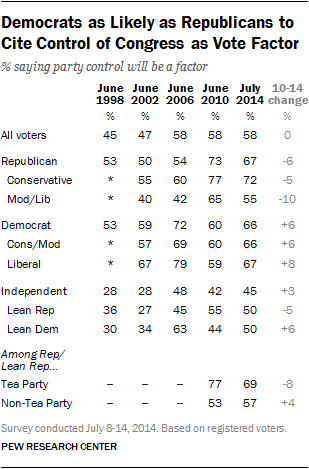 Independents are less likely than Republicans and Democrats to say they will consider party control of Congress in their vote: 45% say this will matter to them, while 52% say it won’t.

More Say Vote Is Against – than For – Obama 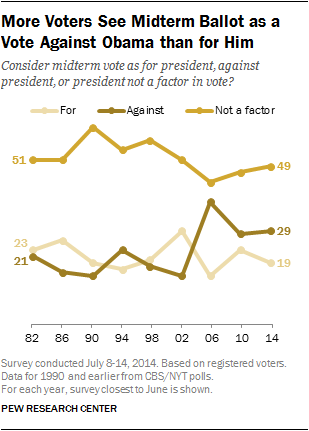 About half of voters say Obama will be a factor in their vote this fall, with somewhat more saying they consider their ballot a vote against Obama (29%) than for him (19%); 49% say the president won’t be much of a factor in their decision. Opinion is little changed from April of this year.

In June 2010, opinion was similarly distributed: 28% considered their vote as a vote against Obama, 23% a vote for him and 47% said he wasn’t much of a factor.

While more say they will cast their midterm ballot as a vote against, than for, the president, opinion is not as negative toward Obama as it was toward George W. Bush in 2006. 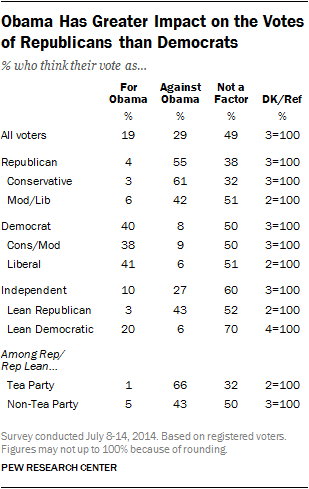 A 55%-majority of Republican voters say they think of their vote for Congress as a vote against Barack Obama, including 61% of conservative Republicans. A smaller percentage of Democrats say they consider their midterm vote as one for Obama: 40% say this, with little difference in the views of liberal Democrats and conservative and moderate Democrats.

In 2006, Democrats were even more likely to cite opposition to Bush as a factor in their vote than Republicans are to say this about Obama today. Eight years ago, 65% of Democratic voters considered their midterm ballot to be a vote against Bush, as did 39% of independent voters.

High Anti-Incumbent Sentiment – Among Both Parties

At this point in 2014, anti-incumbent sentiment is as high as it has ever been in midterm elections dating back to 1994. 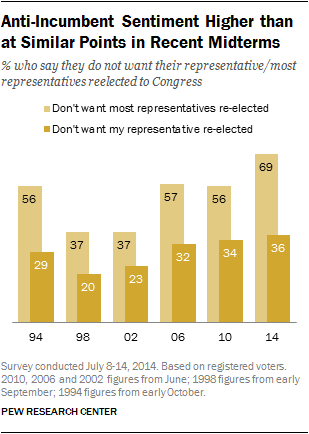 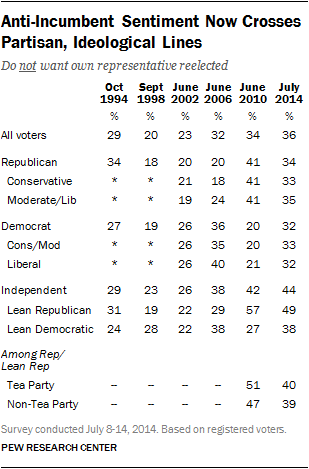 The current anti-incumbent sentiment is being driven by voters across partisan groups. About equal percentages of Republicans (34%) and Democrats (32%) say they do not want their own representative reelected to Congress. Independents (44%) are even more likely to take this view.

This stands in contrast to 2010, when Republicans were much more likely to express anti-incumbent views than Democrats, and 2006, when Democrats were more likely to want their representative to change. 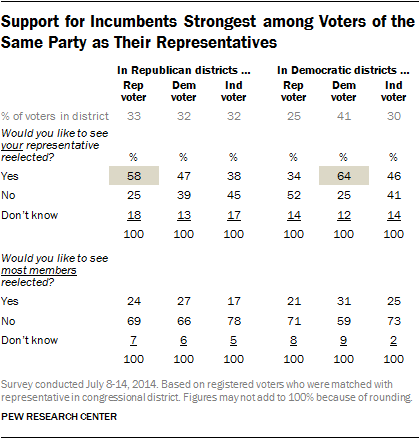 Voters view national issues as their top concern when it comes to factors influencing their midterm vote. 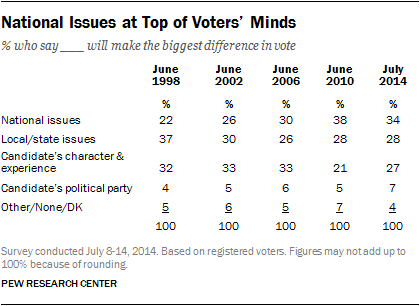 Overall, 34% say national issues will make the biggest difference in their vote for Congress, while slightly fewer name local and state issues (28%) or a candidate’s character and experience (27%). Very few say they will be voting primarily on a candidate’s political party (7%). 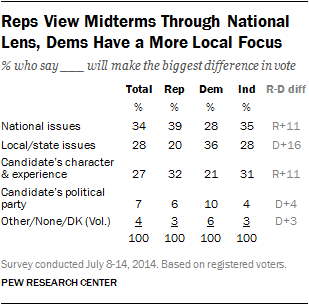 The factors influencing voters’ midterm choice in 2014 are similar to those registered in the summer of 2010, when voters also viewed the election through a national lens. In 2002 and 1998, there was relatively more emphasis on state and local issues and a candidate’s character and experience.

Nearly four-in-ten Republican voters (39%) say national issues will make the biggest difference in how they vote for congress this year, compared with fewer (28%) Democratic voters. Similarly, more Republicans (32%) than Democrats (21%) cite a candidate’s character and experience as the top factor informing their vote.

Democrats are more likely than Republicans to say their vote will be most influenced by state and local issues (36% vs. 20%).

At this stage of the 2014 election campaign, Republicans hold an all-important engagement edge over Democrats. Overall, 77% of Republican voters say they are “absolutely certain” to vote in the election this November, compared with somewhat fewer Democratic voters (70%) who say the same. Republicans also are 9 points more likely than Democrats to say they are following news about the midterm elections either very or fairly closely (56% vs. 47%). 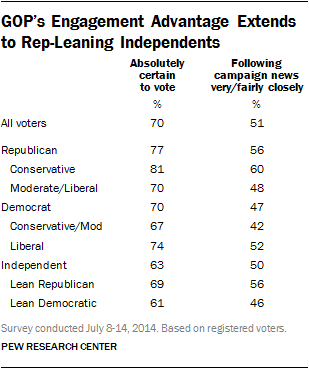 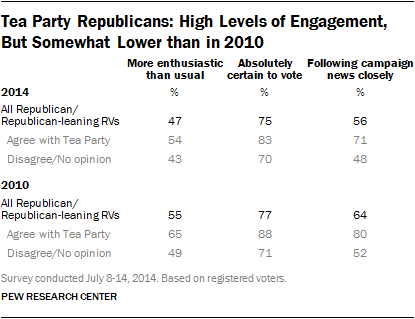 In fact, the enthusiasm of Republicans and Republican leaners who agree with the Tea Party – a group that had major impact on the 2010 elections – has dipped on some measures when compared with four years ago.

Tea Party Republicans remain highly engaged: 83% say they are certain to vote and 71% are following news about the midterms closely. Nonetheless, the percentage saying they are more enthusiastic about voting this year than in the past has declined 11 points (from 65% to 54%) and news interest is down 9 points from June of 2010 (71% today, 80% then).

Next: Section 2: Public Views of Congress; Voters’ Views of Their Own Representatives
← Prev Page
Page1You are reading page2Page3Page4
Next Page →

GOP Has Midterm Engagement Advantage
Section 1: The 2014 Midterm: Voter Preferences, Voter Engagement
More Enthusiastic than Usual about Midterm Vote?Party Control of Congress a Factor in Midterm VoteMore Say Vote Is Against – than For – ObamaHigh Anti-Incumbent Sentiment – Among Both PartiesFactors Driving 2014 Vote ChoiceEngagement Indicators Favor Republicans
Section 2: Public Views of Congress; Voters’ Views of Their Own Representatives About the Survey