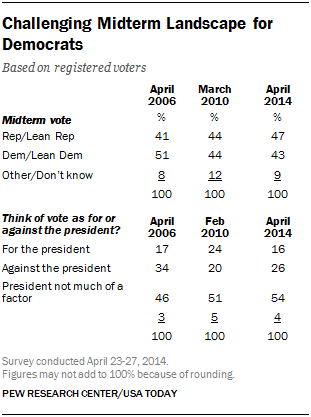 With the midterm elections six months away, Democrats are burdened by an uneven economic recovery and a stubbornly unpopular health care law. Perhaps equally important, Barack Obama’s political standing is in some respects weaker than it was at a comparable point in the 2010 campaign, which ended with the Republicans gaining a majority in the House.

A national survey by the Pew Research Center and USA TODAY, conducted April 23-27 among 1,501 adults (including 1,162 registered voters), finds that 47% of registered voters support the Republican candidate in their district or lean Republican, while 43% favor the Democratic candidate or lean Democratic. The trend over the past six months in the so-called generic ballot shows that Democrats have lost ground. In October, Democrats held a six-point lead (49% to 43%) in midterm voting preferences. 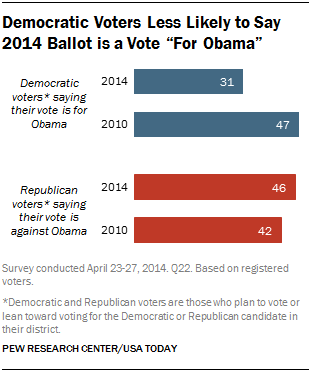 Republicans are no more likely to consider their vote as “against” the president than they were in early 2010 (46% today, 42% in February 2010). But Republicans typically vote at higher rates than Democrats in midterm elections. Democratic voters’ lack of enthusiasm for Obama may complicate Democrats’ turnout efforts.

The president’s overall job approval rating has shown virtually no change dating back to last December. Currently 44% of the public approve of the job he is doing as president while 50% disapprove

Obama’s current approval measure is much higher than George W. Bush’s at this point in the 2006 midterm, and Obama is less of a drag on his party’s midterm prospects than Bush was. In April 2006, Bush had a 35% job rating and twice as many voters considered their midterm vote as an expression of opposition to the president than as a signal of support (34% to 17%). 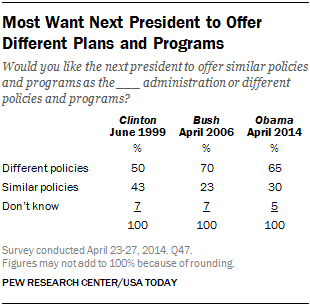 While Democrats face a number of possible disadvantages in the fall, their party’s congressional leaders continue to be viewed less negatively than GOP leaders. Just 23% of the public approves of the way Republican leaders in Congress are handling their jobs while nearly three times as many (68%) disapprove. Job ratings for Democratic leaders, while hardly robust, are not as bad: 32% approve of their job performance while 60% disapprove. 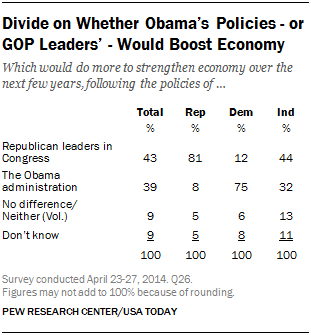 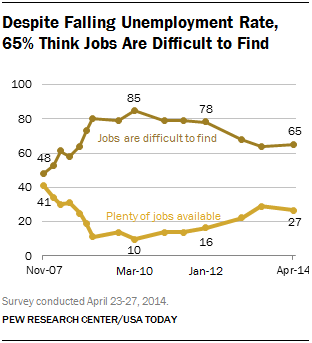 Economic Pessimism Persists. The survey was conducted before Friday’s jobs report, which showed that the unemployment rate had fallen to 6.3%, its lowest level since 2008, and that the economy had added 288,000 jobs. However, more than 800,000 people left the labor force. From the public’s point of view, jobs remain scarce: 65% say jobs in their community are difficult to find while 27% say there are plenty of jobs available. Since the recession, perceptions of the job market have become less negative as the unemployment rate has declined. However, there has been virtually no change in these views since last June (64% jobs hard to find), although the jobless rate has fallen by more than a percentage point (from 7.5% to 6.3%) since then.

Views of ACA Little Changed. As other recent national polls have shown, including the April health care tracking survey by the Kaiser Family Foundation, the recent surge in signups for the new health care exchanges has had little impact on public opinion about the Affordable Care Act. In fact, the share disapproving of the law (55%) is as high as it ever has been in the four-year history of the law. Just 41% approve of the 2010 health care law.

When asked about the health care law’s future, 49% of Americans say they think the law’s major provisions are probably “here to stay” while 43% say they probably will be eliminated. As expected, opinions about the law’s fate are linked to underlying views of the ACA. Still, about a quarter of the law’s supporters (27%) say its major provisions may be eliminated, while 67% say they are probably “here to stay.” Conversely, a third of ACA opponents (36%) say key aspects of the law will likely remain in place; 55% expect them to be eliminated.

Next: Chapter 1: The 2014 Midterm: Congressional Vote, Top Issues
← Prev Page
You are reading page1Page2Page3Page4
Next Page →

Midterm Election Indicators Daunting for Democrats
Chapter 1: The 2014 Midterm: Congressional Vote, Top Issues Chapter 2: Views of the Affordable Care Act and Its Future About the Survey