Public views of the 2010 health care law have changed little over the past several months. Currently, 55% disapprove of the Affordable Care Act and 41% approve. In September, before the launch of the online health care exchanges, 53% disapproved and 42% approved. 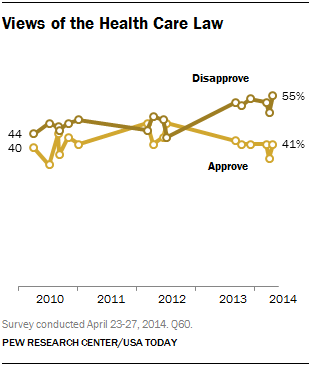 Republicans continue to be largely united in their opposition of the health care law — 88% disapprove and 10% approve of it. Among Democrats, about three-in-four (73%) approve, while roughly one-in-four (24%) disapprove of the law. Independents remain mostly opposed to the law, with 57% disapproving and about four-in-ten (39%) approving of it.

Are the Health Care Law’s Major Provisions Here to Stay? 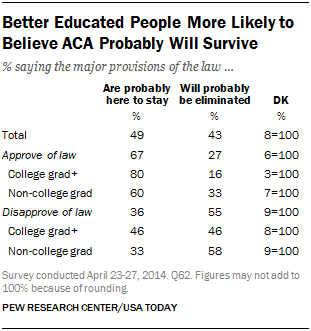 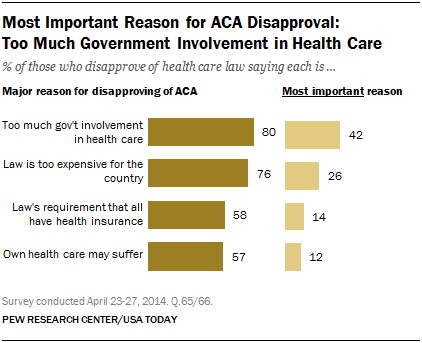 When asked about reasons why they disapprove of the law, large majorities of opponents cite too much government involvement in health care as a major reason (80%). Nearly as many (76%) cite their belief that the law is too expensive for the country.

Smaller majorities point to the individual requirement to get health insurance (58%) and the belief that their own health care may suffer (57%) as major reasons for opposing the law. 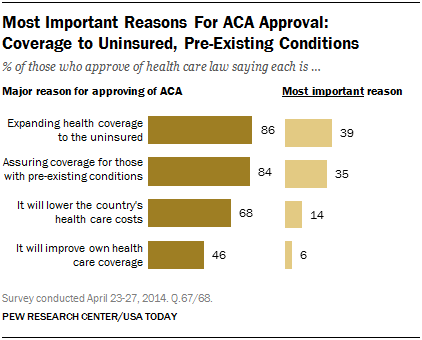 Among those who approve of the law, about equally large majorities say major reasons for their support are the expansion of health coverage to the uninsured (86%) and the guarantee of coverage for those with pre-existing conditions (84%). Other major reasons include the belief that the law will lower the country’s health care costs (68%) and that it will improve one’s own health care coverage (46%).

Most people who approve of the ACA cite either the expansion of coverage to the uninsured (39%) or the assurance of coverage for pre-existing conditions (35%) as the most important reason for their support. Fewer mention the lowering of the country’s health care costs (14%) or the improvement of one’s own health care coverage (6%) as the most important reason. 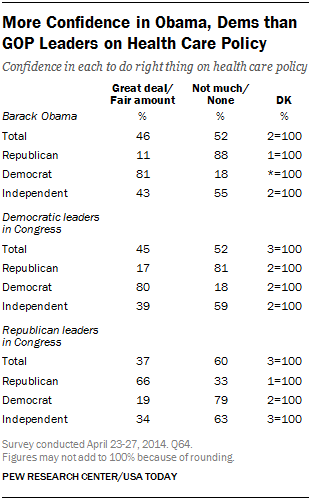 When it comes to health care policy, the public expresses more confidence in Obama and Democratic leaders than Republican leaders in Congress to do the right thing. However, the differences have narrowed slightly since late last year.