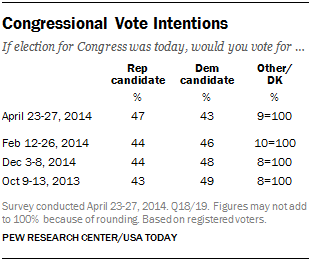 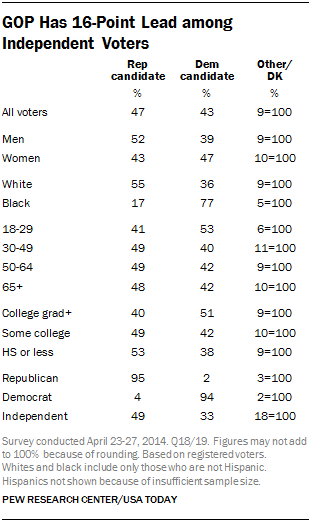 At this stage of the campaign, independent voters are 16 points more likely to say they plan to vote Republican (49%) than Democratic (33%) in the midterm.

Across education levels, those without a college degree favor GOP candidates on the generic ballot, while college graduates tilt Democratic. For more on 2014 voting preferences among demographic groups, see the detailed tables in the back of the report. 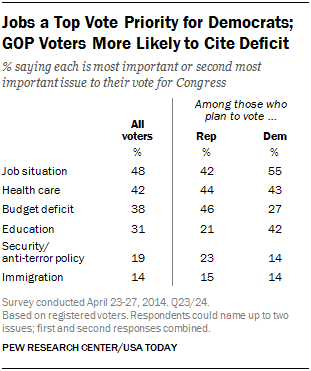 Amid a sluggish economic recovery, the job situation is the top midterm issue for voters, with health care and the budget deficit following closely behind.

Nearly half (48%) of voters say the job situation is the most important or second most important issue to their vote, 42% say health care is a top voting issue, 38% name the budget deficit and 31% name education. Security and anti-terrorism policy (19%) and immigration (14%) are seen as less important midterm issues, out of the six tested in the survey.

Jobs are the top issue for voters who plan to vote Democratic. More than half of Democratic voters (55%) cite jobs as their most important issue or second leading issue. Republican voters give about equal importance to three leading issues: the budget deficit (46%), health care (44%) and the job situation (42%). Republican voters who agree with the Tea Party are more likely than those who do not to cite the budget deficit as a top voting issue (54% vs. 44%).

Partisan Control of Congress a Bigger Factor for GOP Voters 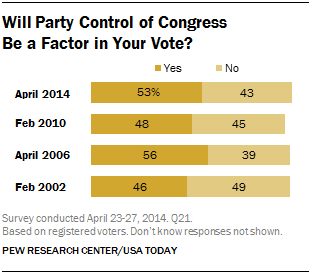 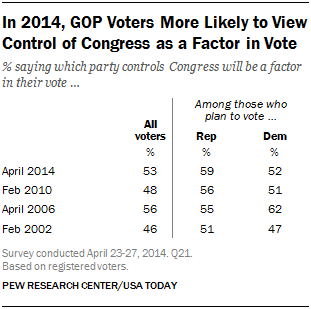 Voters who support or lean toward the Republican Party’s candidate in their district (59%) are more likely than those who plan to vote for the Democratic candidate (52%) to say this issue of party control will matter in their vote. This balance of opinion is about the same as at a similar stage of the 2010 midterm campaign. In the final poll that year, 71% of GOP voters and 64% of Democratic voters cited partisan control of Congress as a factor.

In April 2006, more of those planning to vote Democratic (62%) than Republican (55%) said the issue of party control would be a factor in their vote for Congress. 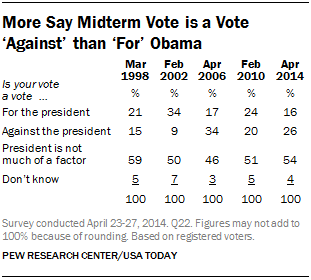 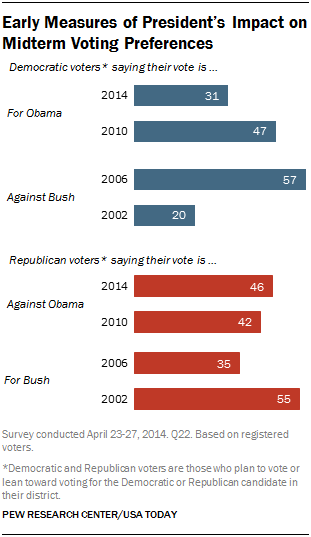 Currently, 42% say their view of Obama will be a factor in their midterm vote: 16% say they consider it a vote “for” Obama while 26% say it is a vote “against” him. In February 2010, about as many said their view of Obama was a factor (44%); they were divided over whether it would be an expression of support for Obama (24%) or opposition (20%).

Near the end of the 2010 campaign, 55% of voters said their feelings about Obama would be a factor in their vote, with 26% viewing their ballot as a vote for the president and 28% against him.

Next: Chapter 2: Views of the Affordable Care Act and Its Future
← Prev Page
Page1You are reading page2Page3Page4
Next Page →