As the midterm election approaches, public views of Congress remain very negative. And a record share of Americans – 55% – say the current Congress has accomplished less than recent sessions. 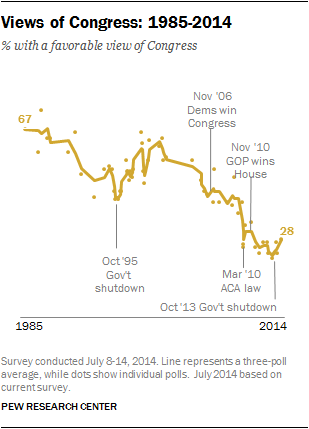 Overall, just 28% of Americans say they have a favorable opinion of Congress. Nearly seven-in-ten (69%) have an unfavorable view. Views of the institution have improved, though only modestly, since reaching an all-time low of 21% a year ago. Congress’s favorability rating has been in negative territory for nearly five years. 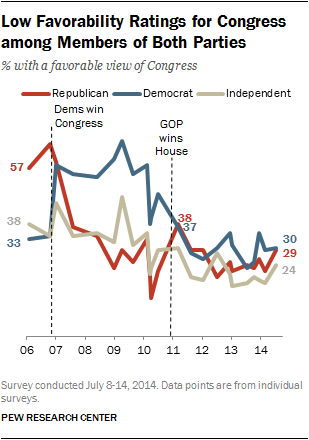 Republicans’ views of Congress became more favorable after the GOP won control of the House in 2010. In March 2011, 38% of Republicans had a favorable impression of Congress, up from 22% the previous July. Even at that point, however, 55% had an unfavorable view of the institution.

Among Democrats, favorable views of Congress also have slipped since early 2011; in March of that year, 37% viewed the institution favorably.

Americans see the 113th Congress as one of the least productive in almost 20 years. The share who say that this Congress accomplished less than its recent predecessors stands at 55%, up from 33% in 2010 and 43% in 2006. 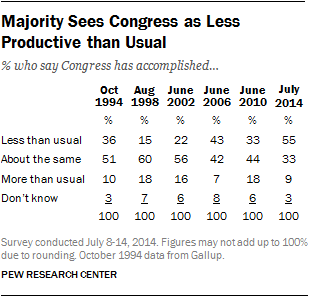 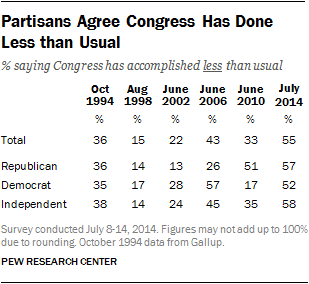 Republicans (57%), Democrats (52%) and independents (58%) largely agree that the current Congress has accomplished less than usual. The public’s assessments of congressional accomplishments are less partisan today than at about this point during any midterm year since 1998.

Among those who say the current Congress has accomplished less, 44% say that Republican leaders are mostly to blame, 28% say Democratic leaders, and 22% volunteer that both parties’ leaders are to blame. 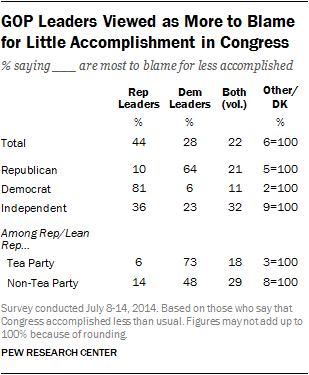 Nearly two-thirds of Republicans (64%) say that Democratic leaders are mostly to blame, while 21% place responsibility on both parties’ leaders. Democrats overwhelmingly blame the Republican Party’s leaders, including fully 86% of liberal Democrats.

Voters’ Views of Their Representatives

Currently, four-in-ten voters (40%) approve of the job their own representative is doing while 48% disapprove, little different than in September 2010. 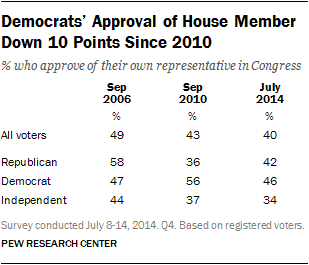 Only about a third (34%) of independents approve of their representative today, little changed from 2010. 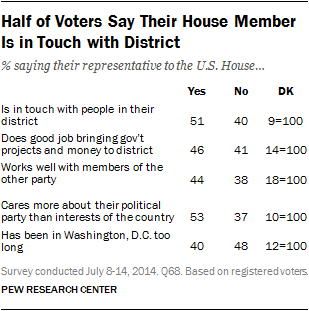 As expected, voters who live in districts currently represented by a member of the party they plan to vote for in the fall have more positive ratings of their lawmakers than do other voters in that district. 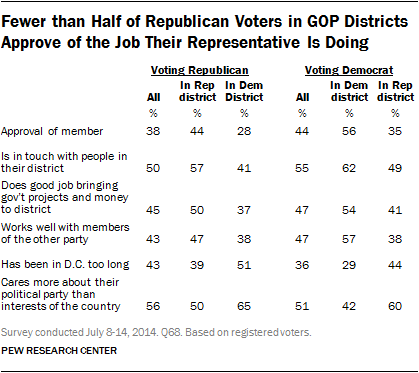 Among GOP voters represented by a Republican who know their lawmaker’s party, 54% approve of their job performance. Nearly two-thirds (64%) of Democratic voters in a Democratic district who know their representative’s affiliation give a positive job rating to their member of Congress.

On the other hand, partisans rank the other side poorly if they know their representative is from the opposing party. Most Democrats who live in a GOP-represented district – and are aware of their member’s party – disapprove of their lawmaker’s job performance (55%); and 57% of Republicans who live in Democratic districts and know their lawmaker’s party also disapprove.

Asked whether their House member is a Democrat or a Republican, 53% of registered voters correctly identify the party of their congressional representative; 22% pick the wrong party and 26% say they don’t know.

Men are more likely than women to correctly identify the party of their representative (60% vs. 46%), but no less likely to provide the incorrect answer (women are less likely than men to offer a response).

Republicans Open Up Wider ‘Expectations Gap’ Ahead of Midterms
Republicans More Optimistic than Democrats about Midterms
Voters More Focused on Control of Congress – and the President – Than in Past Midterms
Republicans Faring Better with Men, Whites, Independents and Seniors
GOP Likely to Recapture Control of House
Quiz: Are you a Core Conservative? A Solid Liberal? Or somewhere in between?
More Americans now say academic concerns should be a top factor in deciding to reopen K-12 schools
Defining generations: Where Millennials end and Generation Z begins
How the Coronavirus Outbreak Has – and Hasn’t – Changed the Way Americans Work
Views on Race in America