Mobile devices such as smartphones and tablets have made accessing the internet easier in recent years – although those who rely heavily on these devices for online access can face challenges accessing certain online services and information. And among Hispanic internet users, the new survey shows a greater share today use these mobile devices to go online than in 2012.

Overall, 80% of Latino adults say they access the internet via a mobile device such as a cellphone or tablet at least occasionally. This high share, however, belies large differences among Latino demographic subgroups.

The likelihood of using mobile internet increases with more education and with a higher family income. While about six-in-ten Hispanic adults with less than a high school education (63%) say they use the internet on a mobile device, about nine-in-ten with at least some college experience (91%) say the same. A similar pattern exists for family income, ranging from 77% among those with a family income of less than $30,000 in 2014 up to 94% among those in families earning $50,000 or more. 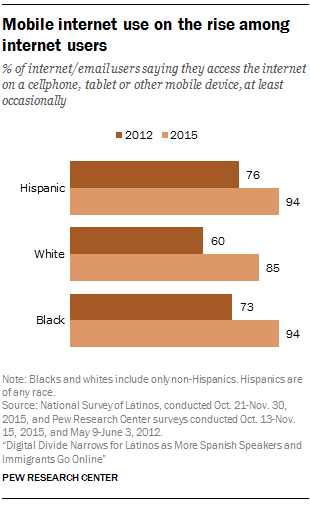 Most online Americans also say they use a mobile device (like a cellphone or tablet computer) to access the internet. 5 But this share is higher among Hispanic (94%) and black (94%) internet users than among white internet users (85%).