As the internet has become an increasingly important resource for finding and applying for jobs, significant disparities persist when it comes to the devices and tools that job seekers have available to access these resources. As home broadband adoption has slowed in recent years, smartphones have become a key source of online access for as many as one-in-five Americans. And out of choice or necessity, many job seekers are now incorporating mobile devices into various aspects of their search for employment – despite the fact that these devices might not be ideal for tasks such as building a resume or cover letter.

In addition to the growing relevance of mobile devices, a substantial majority of working-age Americans now use at least one social media platform. Social media potentially offers a place for job seekers to tap into their networks for help finding work, alert their friends when they hear of jobs availabilities, or promote their own skills in a way that is publicly visible to potential employers. On the other hand, the public nature of these platforms puts potential job seekers at risk that something they say on social media could be used against them when applying for a job.

This chapter takes a closer look at the use and impact of smartphones and social media on job seeking in America today.

Americans with high levels of income and educational attainment often have a number of devices and access options to choose from when they wish to go online. Yet interestingly, these Americans are actually more likely than those with lower income and education levels to use a smartphone when looking for work. For example, some 35% of college graduates (and 33% of those who have attended but not graduated college) are smartphone job seekers, compared with 18% of those who have not attended college.6 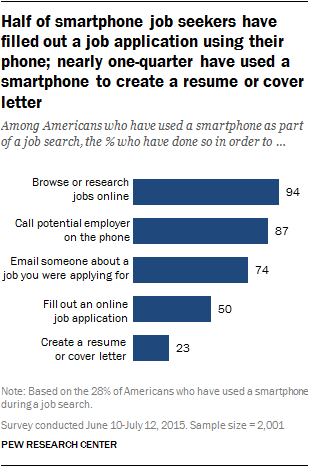 When asked about specific ways in which they have used their phones during a job search, these smartphone job seekers report utilizing their mobile devices for a wide range of purposes. Three relatively basic job-seeking behaviors – browsing job listings, calling or emailing potential employers – stand out as particularly widespread:

More complex activities – such as filling out a job application or creating a resume on one’s smartphone – are less common, but are still done by a relatively substantial proportion of smartphone job seekers:

As noted above, college graduates are more likely than Americans who have not attended college to incorporate their smartphone into a job search in one way or another. However, there are substantial differences between those with lower and higher levels of educational attainment when it comes to the specific ways that each group uses their mobile devices for job seeking. 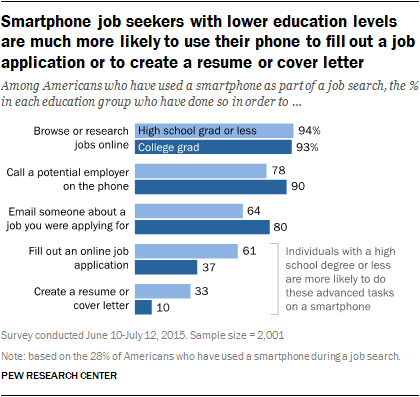 Overall, college graduates who use their smartphone during a job search are more likely to use it for basic communication tasks. For example, they are more likely to have used their smartphone to call a potential employer on the phone (90% have used their phone in this way, compared with 78% of those who have not attended college) or to email someone about a job in which they were interested (80% vs. 64%).

On the other hand, smartphone job seekers lacking college experience are substantially more likely to have used their phone for relatively advanced tasks, such as filling out an online job application (61% vs. 37% among college graduates). They are also three times as likely to have used their phone to create a resume or cover letter – fully 33% of smartphone job seekers with a high school diploma or less have created a resume or cover letter using their phone, compared with just 10% of those with a college degree.7 And while the survey did not specifically probe people’s reasons for using their phones in this way, the availability of more traditional access options (or lack thereof) looms large: Among Americans who have used their smartphone as part of a job search, those who have not attended college are around three times as likely as college graduates to say that they do not currently have broadband service at home.

Even as many smartphone owners are using their phones in various aspects of the job seeking process, the experience of navigating that process on a small screen lacking a dedicated keyboard can be a challenge for many users. 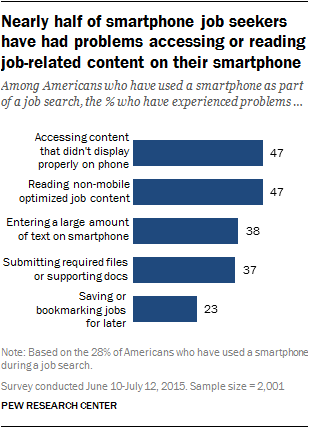 The survey asked about a number of problems or challenges smartphone job seekers might encounter while using their mobile devices and found that problems reading or accessing job-related content are among the most prominent. Some 47% of smartphone job seekers have had problems accessing job-related content because it wasn’t displaying properly on their phone, and an identical 47% have had problems reading the text in a job posting because it was not designed for a mobile device.

Some 65% of Americans now use social media platforms, and for many users these sites offer a venue for highlighting professional accomplishments to prospective employers, finding jobs through one’s networks and alerting friends to available employment opportunities.

Among Americans who use social media:

Along with serving as a venue for finding and researching jobs, prospective job seekers can also use their social media presence to highlight relevant skills to prospective employers. Just over one-in-ten social media users (13%) say information that they have posted on social media has helped them to get a job.