However, the strong jobs recovery for Hispanics is more about demographics than improving economic conditions. The Hispanic working-age population is increasing rapidly, by 4 million from the fourth quarter of 2009 to the fourth quarter of 2013. Consequently, even with the sizable number of new jobs, the Hispanic employment rate has risen by only one percentage point during the recovery, from 59% in 2009 to 60% in 2013. That is significantly less than the 64.3% employment rate at the start of the recession in 2007. 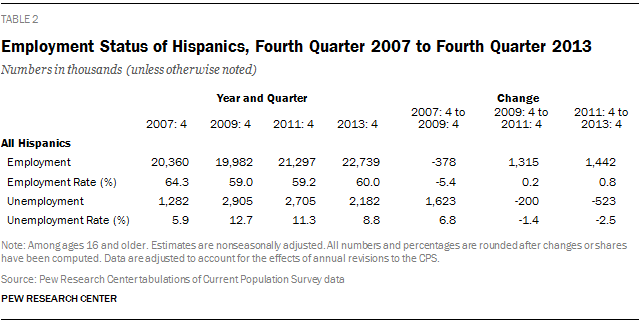 U.S.-born Hispanics to the Forefront

The overall gain in employment for Hispanics conceals a significant disparity in the trends for U.S.-born and foreign-born workers. The vast majority of jobs gained from 2009 to 2013—2.3 million out of 2.8 million—was secured by U.S.-born Hispanics. Meanwhile, the roughly 450,000 new jobs acquired by Hispanic immigrants date to the first two years of the recovery, from 2009 to 2011. Since 2011, the employment of Hispanic immigrants has been at a standstill. 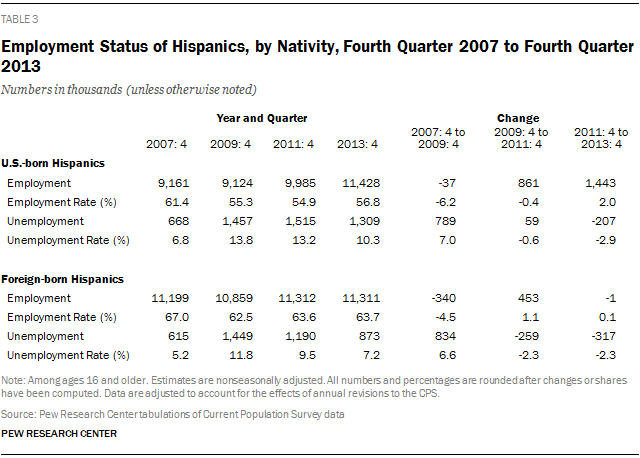 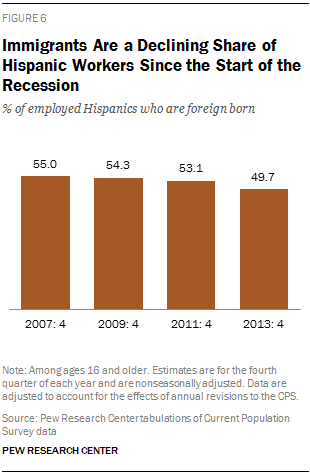 Because of these demographic changes, immigrants no longer account for the majority of Hispanic employment, a status they held for about two decades. The decline in the immigrant share has been fairly rapid, from 55% in the fourth quarter of 2007 to 49.7% in the fourth quarter of 2013.11 Because the U.S.-born Hispanic population is growing rapidly—and accounting for most of the growth in the Hispanic population—it is likely that the U.S. born will continue to be the majority of Latino workers unless the economic recovery triggers a new, rising tide of immigration.

In other respects, the experiences of U.S.-born and foreign-born Latinos have been similar through the recession and the recovery. Both experienced a sharp drop in the employment rate from the fourth quarter of 2007 to the fourth quarter of 2009, and both have failed to recoup the loss in its entirety through the end of 2013. For U.S.-born Latinos, the employment rate fell from 61.4% in 2007 to 56.8% in 2013, and for Latino immigrants the rate is down from 67% in 2007 to 63.7% in 2013.

Next: Chapter 3: The Jobs Recovery for Non-Hispanics
← Prev Page
Page1Page2You are reading page3Page4Page5Page6Page7Page8Page9Page10
Next Page →