Three-quarters of Latinos living in the U.S. say that their community needs a national leader, but about the same share either cannot name one or don’t believe one exists, according to a new national survey of 5,103 Latino adults conducted by the Pew Research Center from May 24 to July 28, 2013.

When asked in an open-ended question to name the person they consider “the most important Hispanic leader in the country today,” 62% say they don’t know and an additional 9% say “no one.”

In a follow-up question on how important it is for the U.S. Hispanic community to have a national leader advancing its concerns, three-quarters of Hispanic adults say it is “extremely” (29%) or “very” important (45%).

U.S. Supreme Court Justice Sonia Sotomayor and U.S. Sen. Marco Rubio (R-Fla.) were each cited by 5% of survey respondents as the most important Hispanic leader in the country today, followed by former Los Angeles mayor Antonio Villaraigosa at 3% and U.S. Rep. Luis Gutierrez (D-Ill.) at 2%. No one else was mentioned by more than 2% of respondents in the survey.1

The survey was conducted at a time when Latino political leaders and civic organizations have been pressing hard for legislation in Congress to create a pathway to citizenship for the estimated 11.7 million immigrants, the vast majority of them Latino, who are living in this country illegally. 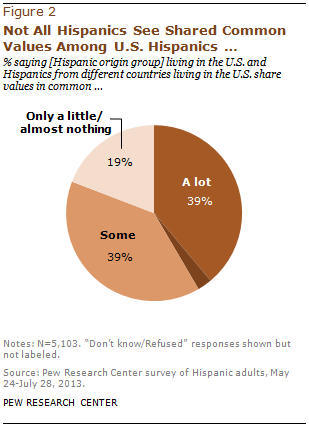 Even though most Latinos say their community needs a national leader to advance its concerns, the survey finds that not all Latinos agree that their community has shared values.

Overall, four-in-ten (39%) respondents say that U.S. Latinos of different origins share “a lot” of values, while another 39% say U.S. Latinos share “some” values and an additional 19% say that they share few or no values. By similar shares, Latinos living in this country are divided about how many values they share with Latinos living in their families’ country of origin.

In another finding that reflects diversity within the Latino community on matters of values and identity, just one-in-five (20%) survey respondents say they most often describe themselves by the pan-ethnic labels “Hispanic” or “Latino.”2

A majority (54%) say they usually use their family’s Hispanic origin term (such as Mexican, Cuban, Salvadoran) to identify themselves, followed by 23% who use “American” most often. The survey also finds that when asked which pan-ethnic term they prefer, “Hispanic” or “Latino,” half (50%) say they have no preference.

The survey finds that half (49%) of all Latinos say they consider themselves a typical American, while 44% say they feel different from the typical American—a share that rises to 67% among immigrants who came to the U.S. in the past five years. 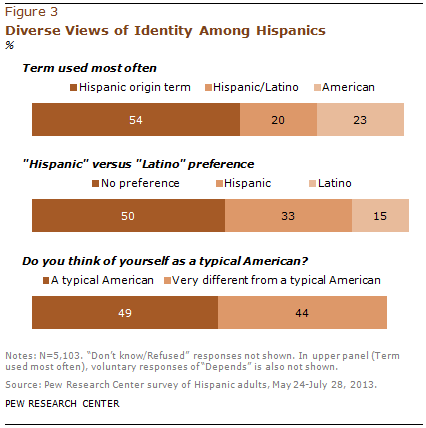 More than 53 million Latinos live in the U.S. today. It is one of the nation’s fastest-growing groups, accounting for more than half of U.S. population growth between 2000 and 2010 (Passel, Cohn and Lopez, 2011). Latinos have also seen the community’s political clout grow, with record turnout in each successive presidential election since 1996 (Lopez and Gonzalez-Barrera, 2013).

The Pew Research Center survey was conducted by landline and cellular telephone, in English and Spanish, from May 24 to July 28, 2013 among a nationally representative sample of 5,103 Hispanic adults. The margin of error for the survey was plus or minus 2.1 percentage points. For details on the survey methodology, see Appendix A.

Need for a National Hispanic Leader

Typical American or Not?

Shared Values among Hispanics in the U.S. and those in the Home Countries

This report focuses on Latinos’ views of national Latino leadership. It also explores Latinos’ views of identity. It is based on findings from a Pew Research Center nationally representative survey of 5,103 Hispanic adults conducted from May 24 through July 28, 2013. The survey was conducted in all 50 states and the District of Columbia among a randomly selected sample of Hispanic adults. The survey was conducted in both English and Spanish on cellular as well as landline telephones. The margin of error for the full sample is plus or minus 2.1 percentage points at the 95% confidence level. Interviews were conducted for the Pew Research Center by Social Science Research Solutions (SSRS).

“Foreign born” refers to persons born outside of the United States to parents neither of whom was a U.S. citizen. Foreign born also refers to those born in Puerto Rico. Although individuals born in Puerto Rico are U.S. citizens by birth, they are included among the foreign born because they are born into a Spanish-dominant culture and because on many points their attitudes, views and beliefs are much closer to Hispanics born abroad than to Hispanics born in the 50 states or the District of Columbia.

Next: 2. Latinos and National Leadership
← Prev Page
You are reading page1Page2Page3Page4Page5Page6
Next Page →