In the year following the official end of the Great Recession in June 2009,1 foreign-born workers gained 656,000 jobs while native-born workers lost 1.2 million, according to a new analysis of U.S. Census Bureau and Department of Labor data by the Pew Hispanic Center, a project of the Pew Research Center.2 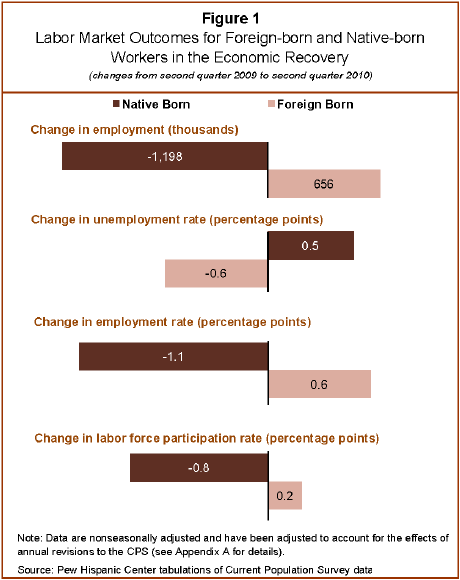 The 2009-2010 recovery for immigrants, who make up 15.7% of the labor force, is also reflected in two other key labor market indicators. A greater share of their working-age population (ages 16 and older) is active in the labor market, evidenced by an increase in the labor force participation rate from 68.0% in the second quarter of 2009 to 68.2% in the second quarter of 2010. Likewise, a greater share is employed, with the employment rate up from 61.7% to 62.3%. 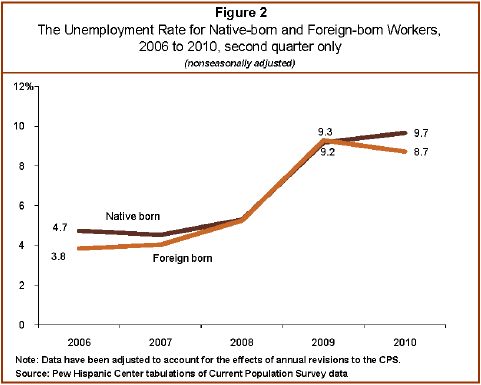 Also, even as immigrants have managed to gain jobs in the recovery, they have experienced a sharp decline in earnings. From 2009 to 2010, the median weekly earnings of foreign-born workers decreased 4.5%, compared with a loss of less than one percent for native-born workers. Latino immigrants experienced the largest drop in wages of all.5 It might be that in the search for jobs in the recovery, immigrants were more accepting of lower wages and reduced hours because many, especially unauthorized immigrants, are not eligible for unemployment benefits.6

The reasons that only foreign-born workers have gained jobs in the recovery are not entirely clear. One factor might be greater flexibility on the part of immigrants. Research suggests that immigrants are more mobile than native-born workers, moving more fluidly across regions, industries and occupations (Orrenius and Zavodny, 2009, Borjas, 2001). But the flip side of flexibility can be instability. Unpublished research by the Pew Hispanic Center finds that immigrants are more likely to exit from and enter into employment on a month-to-month basis.

Another reason that immigrants are displaying greater success at the start of the recovery might simply be that their employment patterns are more volatile over the business cycle. This means that immigrants register sharper losses in the early stages of recessions but rebound quicker in the recovery. That pattern played out in the 2001 recession and recovery,7 and it may be repeating now—there is evidence that immigrants took a harder hit than native-born workers during the Great Recession.8 Whether or not the initial lead in jobs recovery taken by immigrants sustains itself remains to be seen, given the tenuous nature of the overall rebound from the Great Recession.

Demographic changes, both short term and long term, might also be a factor in determining employment trends in the recovery. The ebb and flow of immigration is sensitive to the business cycle, with economic expansions tending to boost inflows. A September 2010 report from the Pew Hispanic Center (Passel and Cohn, 2010) estimated that, coincidental with the economic downturn, the number of unauthorized immigrants in the U.S. labor force fell from 8.4 million in March 2007 to 7.8 million in March 2009.9 It appears that the economic recovery, young as it is, is attracting immigrant workers back into the U.S.

The data for this report are derived from the Current Population Survey (CPS), a monthly survey of about 55,000 households conducted jointly by the Bureau of Labor Statistics (BLS) and the Census Bureau. Data from three monthly surveys were combined to create larger sample sizes and to conduct the analysis on a quarterly basis. The universe for the analysis is the civilian, non-institutional population ages 16 and older.

Because immigration status is not recorded in the source data, this report is not able to identify immigrants in the labor force by whether or not they are unauthorized. However, other reports from the Pew Hispanic Center have reported on the labor force status of unauthorized immigrants. As of March 2009, there were 7.8 million unauthorized immigrants in the labor force, accounting for about one-third of the foreign-born labor force (Passel and Cohn, 2010). Also, the report does not address the question of whether native-born workers would fare differently in the job market absent the growth in the foreign-born labor force. This issue is the subject of research by many economists, including Ottaviano and Peri (2008), Card (2005) and Borjas (2003).

Employment Rate: Percentage of the working-age population that is employed.

Labor Force Participation Rate: Percentage of the working-age population that is employed or actively looking for work.

Unemployment Rate: Percentage of the labor force that is without work and is actively looking for work.

Labor market outcomes are tracked using a variety of indicators. Economic trends are reflected in levels of employment and unemployment, and in the rates of employment and unemployment. The extent to which persons ages 16 and older participate in the labor force, either working or seeking work, is also influenced by economic conditions—people are drawn into the labor market during expansions, and they withdraw during recessions. Changes in these indicators are the key to understanding the impact of the business cycle on different racial and ethnic groups.

Other main findings of this report include:

Next: II. Employment and Unemployment in the Recession and Recovery
← Prev Page
You are reading page1Page2Page3Page4Page5Page6
Next Page →

After the Great Recession: Foreign Born Gain Jobs; Native Born Lose Jobs
I. OverviewForeign born and native bornHispanicsWhitesBlacksAsiansIndustriesWages
II. Employment and Unemployment in the Recession and Recovery III. The Working-Age Population and the Labor Force: Are Immigrants Returning? IV. Earnings of Native-born and Foreign-born Workers Appendix A: Revisions of the Current Population Survey Appendix B: Data Tables