Labor Market Impact of the Recession

The current recession is having an especially severe impact on employment prospects for immigrant Hispanics, according to an analysis of the latest Census Bureau data by the Pew Hispanic Center, a project of the Pew Research Center. The unemployment rate for foreign-born Hispanics increased from 5.1% to 8.0%, or by 2.9 percentage points, from the fourth quarter of 2007 to the fourth quarter of 2008.1 During this same time period, the unemployment rate for all persons in the labor market increased from 4.6% to 6.6%, or by 2.0 percentage points.

Among immigrant Latinos, the share of the working-age population (16 and older) that is employed fell by 2.8 percentage points, from 67.5% in the fourth quarter of 2007 to 64.7% in the fourth quarter of 2008. Among all persons of working age, the employment rate decreased by 1.6 percentage points, from 63.2% to 61.6%, in the first year of the recession.

The recession has also had a strong negative effect on blacks and native-born Hispanics in the labor market. Blacks are currently the only major racial and ethnic group whose unemployment rate is in double digits, 11.5% in the fourth quarter of 2008. Native-born Hispanics had the second highest rate of unemployment (9.5%) in the fourth quarter of 2008. However, changes in the employment rate and other indicators of labor market activity during the recession have been less severe for them than for foreign-born Hispanics.

This report summarizes labor market outcomes for Hispanics and other racial and ethnic groups in the ongoing recession. According to the National Bureau of Economic Research, the U.S. economy entered a recession in December 2007. The Pew Hispanic Center released two reports in 2008 that captured the early phases of the recession. The first report, in June 2008, focused on the construction slowdown and showed that outcomes for Latinos had turned markedly worse during 2007, even prior to the recession. The second report, in December 2008, showed that a small but significant decline had occurred in the share of Latino immigrants active in the U.S. labor force through the third quarter of 2008. This report updates labor market trends through the fourth quarter of 2008, capturing the first full year of the recession.

The data for this report are derived from the Current Population Survey, a monthly survey of about 55,000 households conducted jointly by the Bureau of Labor Statistics and the Census Bureau. Data from three monthly surveys were combined to create larger sample sizes and to conduct the analysis on a quarterly basis. The universe for the analysis is the civilian, noninstitutional population ages 16 and older.2

This report is not able to identify immigrants in the labor force by whether they are documented or undocumented because their immigration status is not recorded in the source data. However, estimates by the Pew Hispanic Center show that unauthorized migrants account for about 5% of the U.S. labor force and about one-third of the foreign-born labor force. They are overrepresented in certain industries such as construction, where they account for 12% of employment (Passel, 2006). Most unauthorized migrants are from Latin American countries, with those from Mexico accounting for about 55% of the total.

Employment Rate: Percentage of the working-age population that is employed.

Labor Force Participation Rate: Percentage of the working-age population that is employed or actively looking for work.

Unemployment Rate: Percentage of the labor force that is without work and is actively looking for work.

Labor market outcomes are tracked using a variety of indicators. Economic trends are reflected in levels of employment and unemployment, and in the employment and unemployment rates. The extent to which persons ages 16 and older participate in the labor force, either working or seeking work, is also influenced by economic conditions—people are drawn into the labor market during expansions, and they withdraw during recessions. Changes in these indicators are the key to understanding the impact of the recession on different racial and ethnic groups.

The principal findings of the analysis, organized by major labor market indicators, are presented below. More detailed data on immigrants by country of origin and year of entry, non-Hispanic immigrants, outcomes for women, and employment by industry are presented in a set of appendix tables. Those tables also contain many of the estimates discussed in the text of the report. 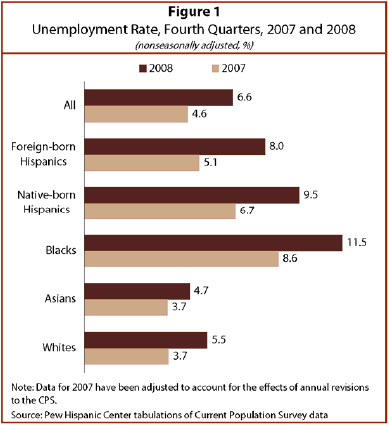 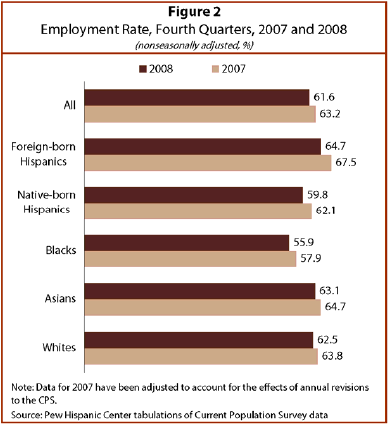 The U.S. economy employed 2 million fewer persons in the fourth quarter of 2008 than it employed in the fourth quarter of 2007. Among major racial and ethnic groups, only native-born Hispanics added jobs in the past year. But this was principally a function of demographics. The native-born Latino labor force is increasing more rapidly than the labor force for any other group—4.8% compared with only 0.7% growth in the U.S. labor force. Thus, as workers retire or leave employment for other reasons, they are increasingly likely to be replaced by native-born Hispanics. 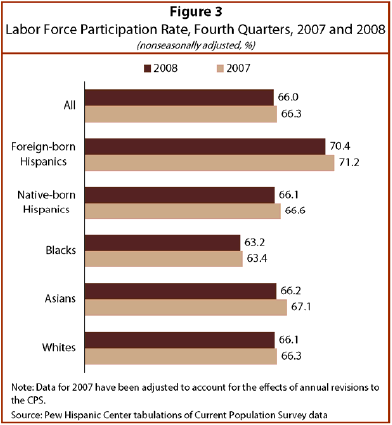 Latinos are an important source of workers to the U.S. economy. The working-age population in the U.S. increased 2.6 million from the fourth quarter of 2007 to the fourth quarter of 2008. Latinos accounted for 1.1 million, or 41.7%, of the total increase. In contrast to the recent past, however, the vast majority of the increase in the Latino working-age population—834,000—was native born.
The increase in the population of foreign-born Latinos has leveled off in the recent past, but it is not possible to conclude from this trend whether or not foreign-born Latinos are returning to their countries of origin in greater numbers. The trend may be due to an increased outflow of migrants, a reduced inflow of migrants or some combination of the two. Passel and Cohn (2008) found a decrease in the annual inflow of undocumented migrants to the U.S. since 2005. About four-in-five undocumented migrants come from Latin America.

Next: Appendix A: Revisions of the CPS
← Prev Page
You are reading page1Page2Page3
Next Page →

Unemployment Rose Sharply Among Latino Immigrants in 2008
OverviewLabor Market Impact of the RecessionUnemployment and Job LossesEmploymentLabor ForceWorking-Age Population
Appendix A: Revisions of the CPS Appendix B: Data Tables