Discontent with the way democracy is working is common in many nations around the world. Across 34 countries surveyed, a median of 52% are dissatisfied with the way their democracy is functioning, compared with 44% who are satisfied.

However, views vary across and within regions. For example, roughly two-thirds or more are satisfied with the way democracy is working in Sweden, the Netherlands, Poland and Germany, but about two-thirds or more hold the opposite view in Spain, Italy, the UK, Bulgaria and Greece.

Those in the Asia-Pacific region tend to be satisfied with how democracy is working in their countries, although Japan is an exception.

Views differ in the Middle East and North Africa. Most Israelis are satisfied with the way democracy is working, but Tunisian and Lebanese publics are among the most dissatisfied in the survey. Opinion in Turkey is divided.

Kenyans are overall satisfied with the functioning of democracy, while most South Africans and Nigerians hold the opposite view. Majorities are dissatisfied in all three Latin American nations surveyed. 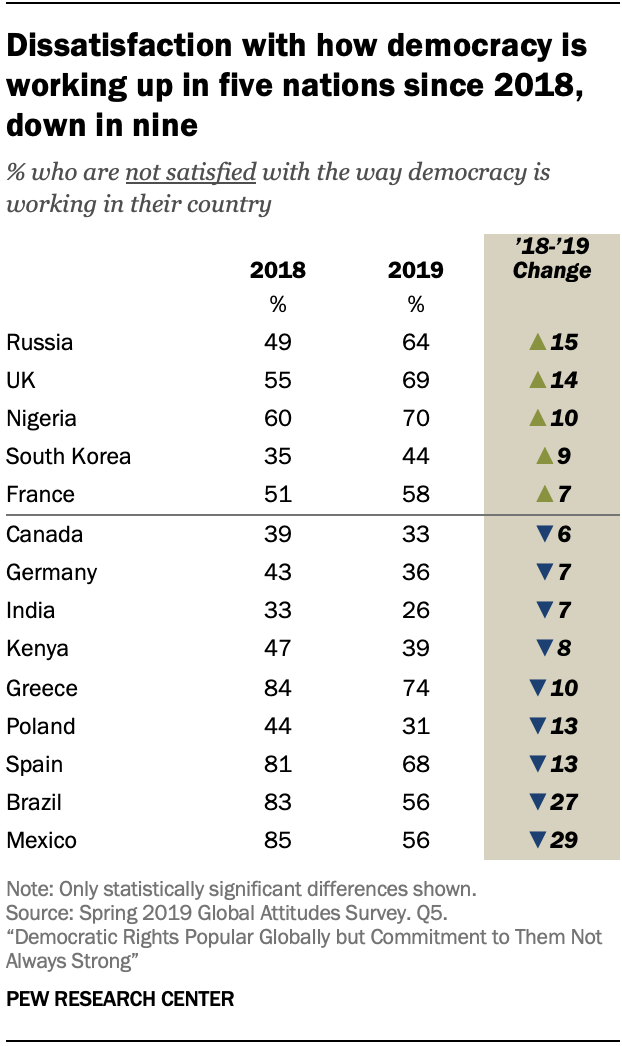 Between 2018 and 2019, publics grew increasingly dissatisfied with democracy in five out of 27 countries surveyed in both years, while dissatisfaction dropped in nine.

Dissatisfaction declined by more than 20 percentage points in Mexico and Brazil, both of which held national elections between the 2018 and 2019 surveys.

Discontent is often more common among people with lower incomes. In 16 of the 34 nations polled, lower-income respondents are more likely to say they are dissatisfied with the way democracy is working.

Across the nations polled, supporters of the ruling party are consistently more content about the functioning of the political system. In 28 of 34 countries, they are more satisfied than others with the way democracy is working. (In six such countries, those who did not support the governing party were more likely to not answer the question.)

Opinions about how democracy is working are associated with economic assessments. In every country surveyed, people who say the economy is doing poorly are more dissatisfied with the functioning of democracy. For example, 79% of Hungarians who believe their national economy is in bad shape say their democracy is not working well; among those who think the economy is in good shape, just 25% express this view.

Assessments of democracy are also related to opinions about the long-term economic future. In each nation polled, the view that democracy is not working well is especially prevalent among those who are pessimistic about the next generation’s economic prospects. For instance, among Slovaks who say that when children in their country today grow up they will be financially worse off than their parents, 68% are unhappy with the state of democracy; 22% among those who believe today’s children will be better off financially express the same sentiment.

Beyond views about economic attitudes, perceptions of politicians play an important role in shaping people’s views about democratic performance. Those who believe political officials don’t care about average citizens tend to be more unhappy with democracy.

In nearly every country, respondents who say elected officials don’t care what ordinary people think are much more likely to be dissatisfied. For example, 77% of Lebanese who don’t think politicians listen to average citizens are dissatisfied with how democracy is working; among those who believe politicians do listen, 43% share this sentiment.