In regions around the globe, many ordinary citizens believe politicians do not listen to them. Across the 34 countries surveyed, a median of 64% disagree with the statement “most elected officials care what people like me think.”

The most positive reviews for elected officials are found in Southeast Asia, among Indonesians and Filipinos. There are only five other nations where even half of the public says political officials care what their constituents think.

Frustration with political elites is especially high in many European nations. Seven-in-ten or more in the UK, Hungary, Czech Republic, France, Spain and Bulgaria say elected officials don’t care, and 84% hold this view in Greece, the highest percentage on the survey.

The perception that politicians are out of touch is also particularly widespread in Ukraine, Tunisia, Argentina and Japan.

In many other countries, however, there are significant partisan gaps. In 20 nations, supporters of governing parties are more likely to say that elected officials care about what people like them think.

When asked whether they agree with the statement “the state is run for the benefit of all the people,” global publics are divided: A median of 49% across 34 countries agree, while 50% disagree.

Responses to this question vary considerably across Europe. Large majorities believe the state is run for the benefit of all in Slovakia, the Czech Republic, Hungary, Sweden and the Netherlands. But two-thirds or more disagree with this view in Greece, Bulgaria and Italy.

Filipinos, Indonesians and Indians are particularly likely to agree the state is run for the benefit of everyone, while disagreement is especially prevalent in Argentina, Tunisia, Lebanon and Ukraine. 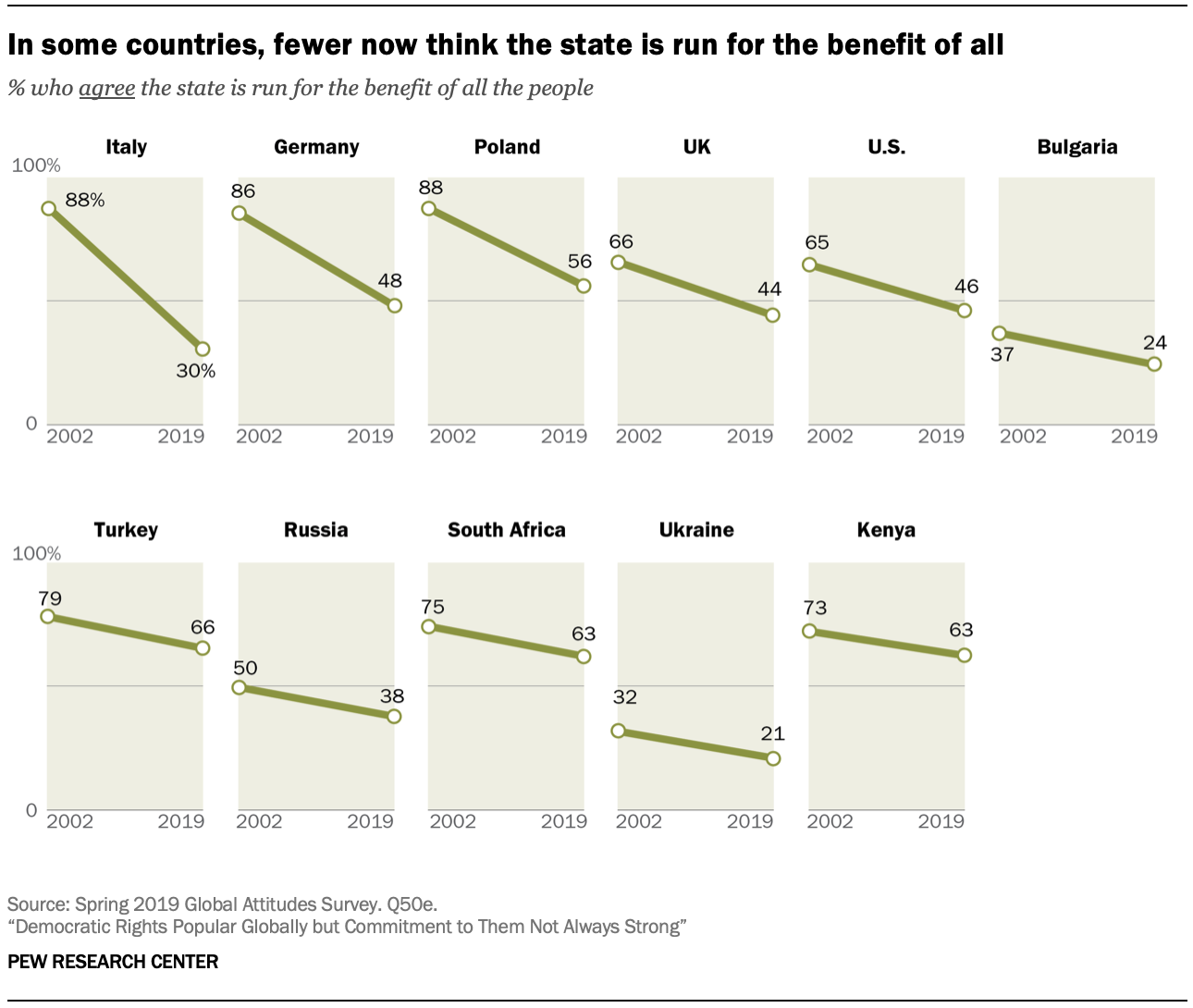 In 11 of 20 countries where this question was asked in 2002 and 2019, the share of the public saying the state is run for the benefit of all has declined significantly. In 2002, for instance, 88% of Italians held this view, compared with just 30% today.

Despite the frustrations most have with politicians, and the belief many hold that the state is run in an unfair manner, people still feel they have a political voice. Across the nations polled, a median of 67% agree that voting gives ordinary people some say about how the government runs things.

Strong majorities in most nations hold this view, including 74% in the U.S. In Spain, Sweden, the Philippines and South Korea, eight-in-ten or more express this opinion.

Still, substantial shares of the public do not believe their vote matters in many places, including 55% in Japan and nearly half in Tunisia, Lebanon, Hungary and Nigeria. In most nations, the belief that one’s vote does not have an impact is especially common among those who do not view the governing party favorably.

Next: 3. Satisfaction with democracy
← Prev Page
Page1Page2You are reading page3Page4Page5Page6Page7
Next Page →