Partisanship also plays a role. Those who have favorable views of populist parties and those who support parties that are not currently in power are more dissatisfied. In Europe, those who have unfavorable opinions of the EU or who think immigrants are resisting integration into society also tend to be unhappier with the state of democracy.

To further understand what informs satisfaction or dissatisfaction with the way democracy is working, we explored these and other relationships using multilevel regression. In this chapter, all factors discussed as contributing to democratic dissatisfaction are relationships that persist after accounting for other key attitudes and demographic variables (in regression parlance, we have “controlled” for other factors). For more about the methodology and for a more detailed presentation of the regression model informing these results, please see Appendix A.

Many recent debates around democratic satisfaction have emphasized economic attitudes. Previous work by Pew Research Center found that those who are critical of the establishment and open to populist alternatives are more likely to have experienced economic hardships, such as unemployment.

While our analysis finds that views of the economy help explain who is dissatisfied, other factors matter as well, especially attitudes about key elements of the political system.

Aspects that are often characterized as core tenets of democracy, like rights to freedom of expression and fair courts, are important in understanding people’s dissatisfaction. For example, across the 27 countries surveyed, those who say their country protects freedom of expression tend to be less dissatisfied with democracy. Confidence in the fairness of courts is also strongly related to dissatisfaction with democracy. Those who believe the court system in their country treats everyone fairly are less dissatisfied.

And, while this survey focused more generally on freedom of expression rather than directly on the role of the media, a past Pew Research Center report found a link between attitudes toward the news media and the government. A survey of 38 countries found that people who are less satisfied with the functioning of the news media also tend to express less trust in the government to do what is right for the country. 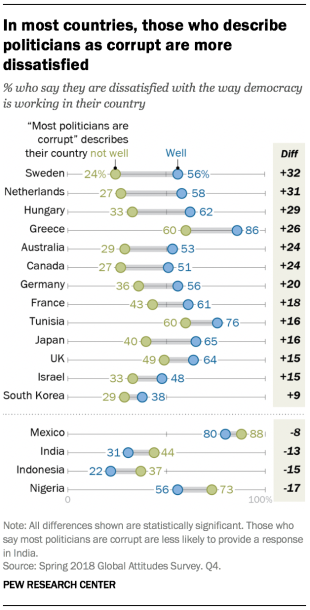 Beyond opinions of these core democratic institutions, perceptions of political officials play an important role in shaping people’s views about democratic performance. Those who think elected officials care what ordinary people think are much less likely to be dissatisfied.

While also important, the relationship between corruption and dissatisfaction is not as strong. Nonetheless, in several nations, there is a significant relationship. In Sweden, for instance, those who say most politicians are corrupt are 32 percentage points more dissatisfied than those who do not think this describes their country well.

And, in four of the nine emerging economies surveyed, those who describe most politicians as corrupt are actually less dissatisfied with democracy.

Electoral change, perceptions of safety not linked to democratic dissatisfaction

Even though a 27-country median of six-in-ten say that things do not change very much no matter who wins an election, this opinion is not related to dissatisfaction with democracy in most countries. Nonetheless, support for the party or parties in power in a country does relate to democratic dissatisfaction.

In general, feeling safe when walking around at night is not related to democratic dissatisfaction. Even those who feel as if most people live in areas where it was not safe to walk around at night are not systematically more dissatisfied.

Next: Acknowledgments
← Prev Page
Page1Page2Page3You are reading page4Page5Page6Page7Page8Page9Page10
Next Page →